Huffington Post publishes, and then deletes, a post by a MeK spokesman. What does this tell us about Terrorism? 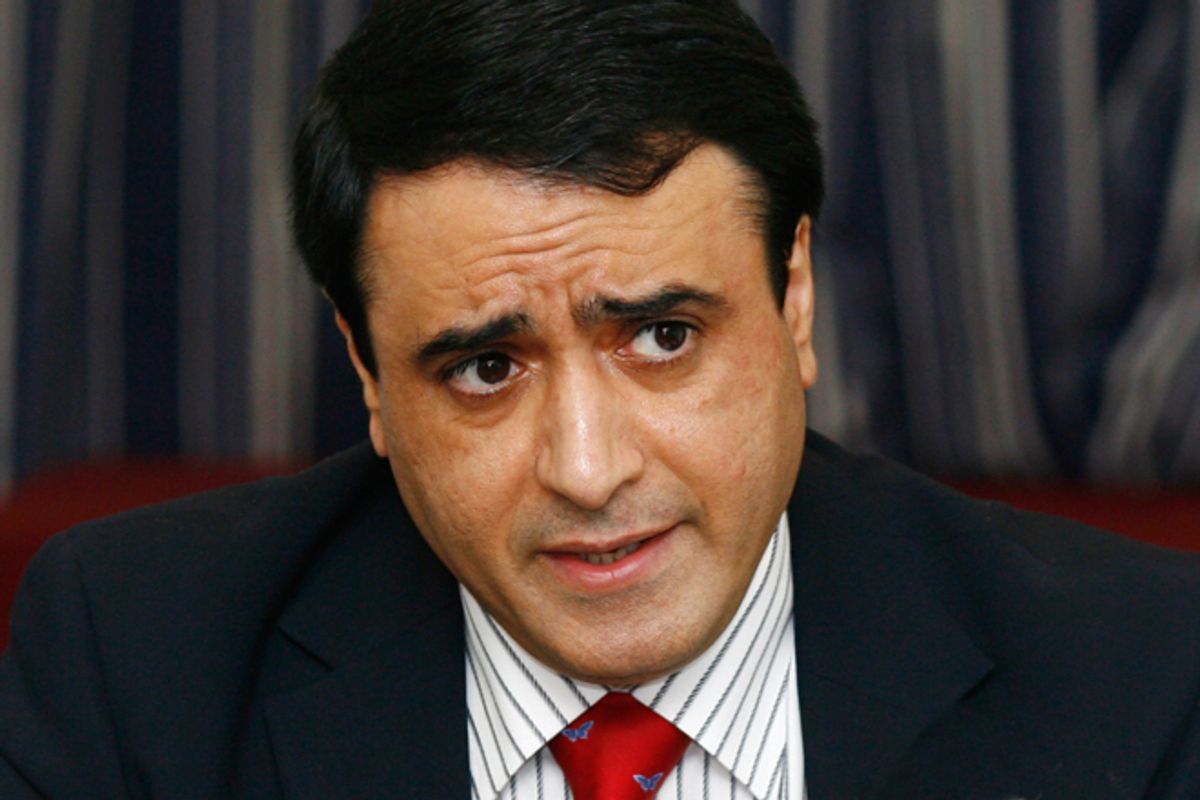 Yesterday morning, The Huffington Post published a post by Hossein Abedini, who was identified in the byline as a "Member of Parliament in exile of Iranian Resistance." His extended HuffPost bio says that he "belongs to the Foreign Affairs Committee of the National Council of Resistance of Iran" (NCRI). The NCRI is the political arm of the Mujahideen-e Khalq, (MeK), the Iranian dissident group (and longtime Saddam ally) that has been formally designated  by the U.S. State Department since 1997 as a Terrorist organization, yet has been paying large sums of money to a bipartisan cast of former U.S. officials to advocate on its behalf (the in-hiding President of the NCRI, Massoud Rajavi, is, along with his wife Maryam Rajavi, MeK's leader). Abedini, the HuffPost poster, has been identified as a MeK spokesman in news reports, and has identified himself the same way when, for instance, writing letters to NBC News objecting to negative reports about the group.

Yesterday's HuffPost piece by Abedini touted a recent rally, held on June 23 in Paris, which, he claimed, was attended by "over 100,000 Iranian exiles and supporters of the Iranian resistance from five continents." The news report cited by Abedini actually says that "tens of thousands" of Iranians participated, and -- reflecting what seems to be MeK's bizarrely unlimited budget -- they were transported by "more than a thousand buses . . . from all over Europe." Abedini boasted that the rally's keynote speaker was MeK leader Rajavi (whom he calls "the President-elect of the Iranian Resistance") -- it was a MeK rally -- and quotes her at length demanding the removal of MeK from the list of Terror organizations.

Shortly after the HuffPost piece appeared, several people on Twitter, the first of which (I believe) was the Iranian journalist Hooman Majd, noted that The Huffington Post had published a propaganda piece from a designated Terror group and wondered whether they would do so for all such Terror groups such as Al Qaeda. After several others, including The New York Times' Robert Mackey and myself, noted the oddity that HuffPost was publishing pieces from a designated Terrorist group, HuffPost deleted the piece. If one goes now to the URL where the post first appeared, one finds this: "Editor's Note: This post is no longer available on the Huffington Post" (the post can still be read in its cached version). No explanation is given for the deletion, but a HuffPost spokesperson, Rhoades Alderson, last night responded to my inquiry about it as follows:

It was published by mistake. By policy, we don't publish blog posts by people affiliated with designated terrorist organizations. The blog editor who published it was unaware that NCRI is MEK's political arm. When the mistake was discovered the post was removed.

Despite this "policy," the same post by Abedini remains on the HuffPost's UK site. Moreover, HuffPost has previously published numerous pieces from Abedini including one linking the Syrian and Iranian "resistance" and demanding Western support for both, another branding Iran the "epicenter of terrorism," and other posts spouting the MeK line. All of those posts by Abedini remain on the HuffPost site.

To be clear, I don't find HuffPost's conduct -- either in publishing posts from MeK spokespeople or removing them -- to be objectionable. That's not the point here. I personally believe it's better to hear from all groups and to have all viewpoints aired rather than trying with inevitable futility to suppress them, but if HuffPost really does have a policy against publication of "people affliated with designated terrorist organizations," then -- just like laws criminalizing the providing of "material support to Terrorist organizations" -- it should apply equally to MeK and those who work with it (including MeK's list of paid D.C. political celebrities).

[In the wake of 9/11, the U.S. Government instructed American media outlets not to broadcast any statements from Osama bin Laden on the ground that he might embed in his statements coded signals to his followers to activate sleeper cells on American soil -- perhaps he would use the nose wiggle employed by Bewitched's Samantha Stevens to unleash her magic powers -- and many American media outlets (needless to say) dutifully complied. It seems clear that the real reason for suppression of those Al Qaeda statements was to ensure that Americans, who were understandably asking "Why Do They Hate Us"? in the wake of 9/11, would be prevented from hearing Al Qaeda's actual grievances about U.S. aggression so that they could instead be told that They Hate Us for Our Freedom; George Bush on September 21, 2001: "Americans are asking 'Why do they hate us?' . . . They hate our freedoms: our freedom of religion, our freedom of speech, our freedom to vote and assemble and disagree with each other". It's far preferable, in my view, to allow all views to be aired, but a ban on Terror groups and their supporters should be equally applied.]

What makes this HuffPost event notable is that it is inconceivable that they would publish posts from spokespeople or paid advocates for other designated Terrorist groups which do not command widespread support among Washington's elites -- such as, say, Al Qaeda, or Hamas, or Hezbollah. MeK is treated differently because they are Our Terrorists. NBC News reported that "deadly attacks on Iranian nuclear scientists are being carried out by an Iranian dissident group [MeK] that is financed, trained and armed by Israel’s secret service," while The New Yorker's Seymour Hersh detailed in April that the U.S. has provided extensive training to MeK operatives, on U.S. soil. This entire MeK controversy has, as vividly as any event in a long time, illustrated the core truth of Terrorism and the laws against it: the entire concept has no purpose in American political discourse and law other than to delegitimize and criminalize support for groups which use violence in opposition to American violence and aggression, while sanctioning and enabling those groups which use such violence to advance America's interests.

MeK used to work in close cooperation with Saddam (during the time Saddam was America's decreed Enemy, rather than Ally), so they were therefore Bad: Terrorists. Indeed, in 2003, when the Bush administration was advocating an attack on Iraq, one of the prime reasons it cited was "Saddam Hussein’s Support for International Terrorism," and it circulated a document purporting to prove that assertion, in which one of the first specific accusations listed was this:

Iraq shelters terrorist groups including the Mujahedin-e-Khalq Organization (MKO), which has used terrorist violence against Iran and in the 1970s was responsible for killing several U.S. military personnel and U.S. civilians.

So just nine years ago, Saddam's links to MeK were cited by the U.S. Government as proof that he sheltered Terrorist groups. Now, the MeK works for the interests of (and in cooperation with) Israel and the U.S., so suddenly, they are now Good, and the most Serious Beltway officials are free to openly take money from and advocate for this Terror group (as a result, the MeK is, predictably, highly likely to be rewarded by being removed by the Obama administration from the Terrorist list). They are basically the Ahmad Chalabis of Iran: despite being widely despised in Iran for their support for Iraq in its war against Iran, they are being deceitfully held out as the True Pro-American, Pro-Israel, Pro-Western-Intervention Voice of the Iranian People (paid MeK shill Howard Dean actually argued that the U.S. should recognize MeK's leader as the legitimate President of Iran).

That HuffPost responded to yesterday's pressure by removing the MeK post and citing its policy against publishing those "affliated with designated terrorist organizations" is valuable in the sense that it highlights the absurd travesty of "Terrorism" in U.S. politics. For legal purposes, at least, MeK is every bit the Terrorist organization that Al Qaeda is, yet they are now Our Terrorists, and are thus heralded and rewarded rather than scorned.

It was recently revealed that Clarence Page, the long-time Chicago Tribune columnist, was paid $20,000 to speak at this same MeK rally in Paris, along with travel expenses; once that was revealed, The Chicago Tribune reprimanded him and he announced that he would return the fee. It's just extraordinary how much cash is flying around and ending up in the pockets of prominent and influential Americans in order to shill for this Terror group.

Finally, a new Pentagon report to Congress stresses, as the Federation of American Scientists put it, that "that while developing offensive capabilities, Iran’s military posture is essentially defensive in character" -- specifically, "Iran’s military doctrine remains designed to slow an invasion; target its adversaries’ economic, political, and military interests; and force a diplomatic solution to hostilities while avoiding any concessions that challenge its core interests." Let's repeat that: quite understandably, "Iran's military posture is essentially defensive in character."

UPDATE: In addition to Abedini, The Huffington Post has also repeatedly published Ali Safavi, who is also identified as "a member of Iran's Parliament in Exile, National Council of Resistance of Iran." Safavi has also used his HuffPost platform to propagate standard MeK propaganda, such as this piece entitled "Time to Act on Iran Regime" which demands that "the US must immediately delist the MEK" and argues that "delisting the MEK will strengthen the entire opposition in Iran, serving to suffocate Tehran's nuclear drive and expansionist agenda," and this one, entitled "Reality Check: Understanding the Mujahedin-e Khalq," that reads like a MeK press release. He appeared on CNN in 2003 as a NCRI representative and said that the MeK "of course is one of the five member organizations of the National Council of Resistance of Iran." Safavi formerly lived in London where he led the movement to have the MeK unbanned, and often appears at Congressional hearings advising pro-MeK members of Congress. He now heads a "think tank" in D.C., the Near East Policy Research, which is overtly pro-MeK.

In sum, if HuffPost intends to apply its ostensible policy of banning "people affiliated with designated terrorist organizations," it has a lot more work to do beyond deleting this single post from yesterday. That site has become a regular outpost of propaganda for the MeK Terror group. Just try to imagine if they were regularly publishing Al Qaeda or even Hamas and Hezbollah spokespeople: they'd be aggressively accused, perhaps even by the U.S. Government, of materially supporting Terrorists (a Staten Island man is still in federal prison for the "crime" of assisting and including a Hezbollah channel in the cable package he sold to customers). It would never be tolerated. Why should MeK be any different?