As the final season of "Breaking Bad" begins, how will things end for the menacing and manipulative evil genius? 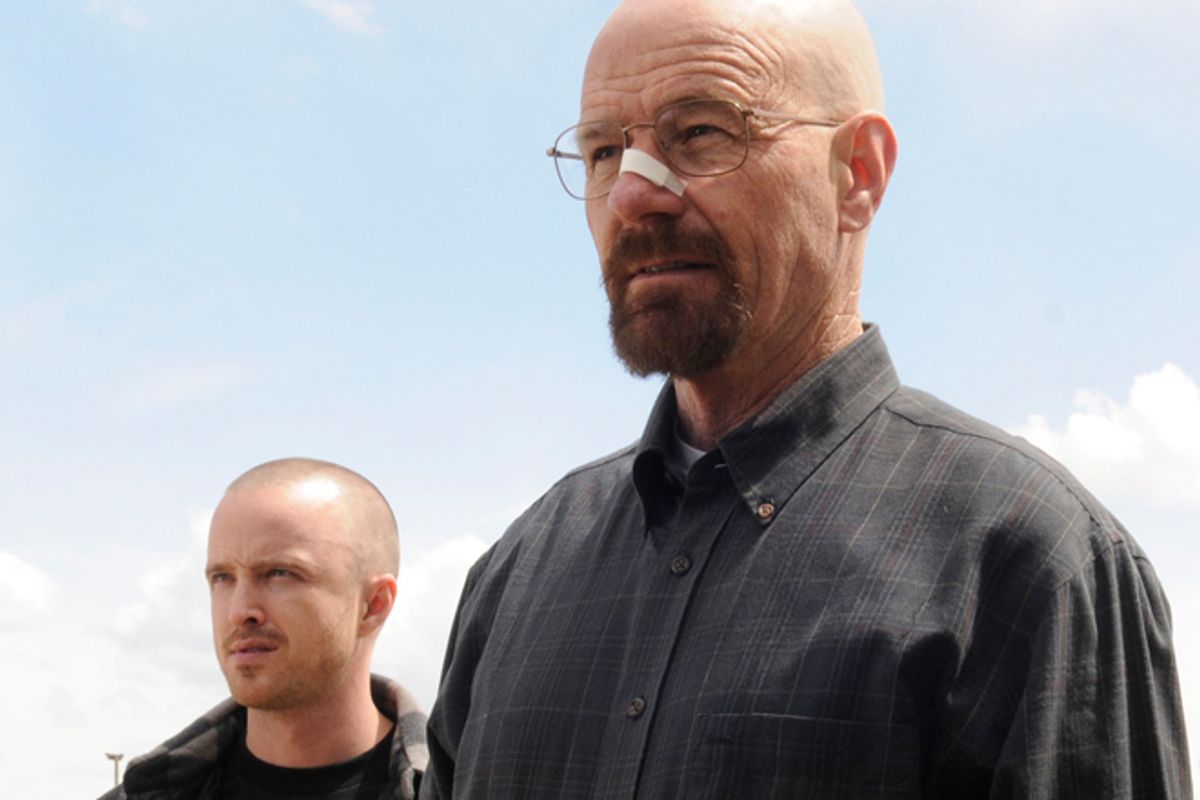 “Breaking Bad,” AMC’s incredible, amped-up methodrama, begins the first half of its final season on Sunday night, and though it is just starting, I am consumed with how it will end. Over the course of its first four seasons, “Breaking Bad” has taught us what we can expect from it: It will not let us, or our pulses, down. The irascible Jesse will chirp the word “bitch,” among other endearingly smart-aleck, street-inflected phrases, while wearing a hoodie and sneakers. Walter White will continue to become more and more evil as he wrestles with another opponent and manipulates the people he purports to love in increasingly bold ways. It will play like a gorgeously filmed, superbly acted and psychologically rich action movie, a serious drama that is uncharacteristically serious about plot, zooming through story lines like a speed freak on a Yamaha. Everything will be filmed in deadening yellows and washed-out blues. And there will be blood. It's whose blood, exactly, that I have become so consumed by.

“Breaking Bad’s” creator, Vince Gilligan, has long described Walt's arc from a mild-mannered chemistry teacher into an egomaniacal meth maker as being that of Mr. Chips turned into Scarface, a good man transformed into an amoral one. Mr. Chips is making increasingly rare cameos these days, and I suspect that those audience members who are still holding out sympathy for Walt will not be able to do so for much longer. There are 16 episodes left: Is that enough time for Walt to kill Mike, the phlegmatic security maven who, in this new season, becomes even more deadpan and likable than he was in the last? To get to his DEA brother-in-law Hank? Or to do in, God forbid, Jesse? Who has to die for the Scarface transformation to be irrevocable and complete? And at what point do I have to fill a Xanax prescription before I can sit down to watch?

That I am asking these questions should tip you off to my feelings for Walt: I have long since come to despise him and think him capable of just about anything, which has had no knock-on effects for my feelings about “Breaking Bad.” I love “Breaking Bad” and I hate Walter White. I never could forgive him for letting Jesse’s girlfriend choke to death back in Season 2. By the end of last season, when he had endangered the life of an innocent child to further his own agenda and was delivering self-deluding, self-promoting, “I’m doing this horrible thing for my family but actually so I can receive the recognition and respect I deserve” speeches like they were “Good mornings,” I was seriously rooting for the contained, controlled Gus Fring to take Walt down. Alas, Walt took down half of Gus’s face instead. For me, a happy ending to “Breaking Bad” would be for Walt to find himself teaching chemistry again, inglorious, unknown. Or, barring that, to be dead. But there’s no reason to expect that “Breaking Bad” will supply a happy ending, or, even if it does, that Walt does not have further evil to do before he gets his comeuppance. (Please not Jesse. Really, really, please, please.)

While I recognize that I am probably pretty far along on the hating Walter White Scale (oh, you watch, though, Vince Gilligan is just breaking last straws; wait till he gets to yours), this has not dampened my affection for the show. “Breaking Bad” has always been a full-body visceral experience: It has always specialized in those interminably tense scenes of waiting for something horrible to happen — Walt and Jesse waiting inside a trailer to get busted, Walt and Jesse waiting in the desert to die of thirst, Hank waiting inside a car to get shot. The smug, menacing, megalomaniac Walt, parading around like he invented drug dealing, is the walking incarnation of this tension. With just the tone of his voice, the stupendous Bryan Cranston can make clear whether Walt is being genuine (deeper, slower voice), fake (angry condescension), pretending to be genuine (sweet, high pitched, hint of condescension), or genuinely being fake, as in he is just deluding himself (hepped-up, manic energy). It is increasingly claustrophobic and anxiety-producing just having him onscreen. Every single thing he says has started to sound like a threat. He is the something horrible that is waiting to happen. He, as he only half-delusionally put it, is the one who knocks.

Last season ended with two insanely high-octane episodes, a gonzo series of events masterminded by Walt in a display of cunning that could only have inflated his already outsize conception of himself as a neglected genius. The new episodes pick up right where we left off, with Walt having used a toxic plant, a cigarette switcheroo, the poisoning of a small boy, a vengeful man in an old age home, and a bomb to kill Gus, and then to call Skyler and tell her that he has “won.” It’s no fault of the excellent first two episodes that they can’t quite match the intensity of what came before. What could?

Presumably, things will pick up speed as Walt picks up the loose strands of the speed trade he just destroyed. Without Gus in play, Walt has an opportunity to become — as “Breaking Bad’s” promotional materials suggest — the king.  Anyone who thinks that Walter White would turn down power to avoid danger has not been watching very closely. Determined and devious, Walt is more unlikable than ever. Perhaps the only genuine moment comes in the second episode when he comforts a crying Jesse: He still really cares about his partner, a sort of surrogate son, but it would mean more if Walt was not the cause of Jesse’s tears, having manipulated him into believing something untrue.

“Breaking Bad” continues to demonstrate that it both is and is not different from the serious dramas to which it is often compared. Like "The Wire," "The Sopranos" and "Mad Men," it features an antihero pushing at the limits of our empathy while navigating a masculine, violent world -- but there has always been a tactile difference between “Breaking Bad” and those other shows. There is no haze surrounding “Breaking Bad,” it doesn’t have the verbal density of David Milch’s work, or the watching-through-a-metaphor fog that occasionally settles over “Mad Men,” or the sheer number of characters of “The Wire.” Those series, brilliant all, revel in a certain amount of opacity, a degree of difficulty that lets the audience know its creator wants them to work for comprehension. “Breaking Bad” is crystalline compared to this. It wants to entertain you, to draw you in with exciting, exacting plotting, and precisely drawn characters. In those rare moments when we are not fully aware of what is happening, the show will soon explain them. I suspect Walt's trajectory will eventually be rendered this clearly. Who will be left standing by then?

At the end of the second episode, Walt climbs in bed and embraces his wife, Skyler, totally heedless of her mounting panic around him. He kisses her neck and whispers what might be threats into her ear, indifferent to discomfort. He doesn’t care that he scares her. He wants what he wants. My skin crawled. It will not be the last time.