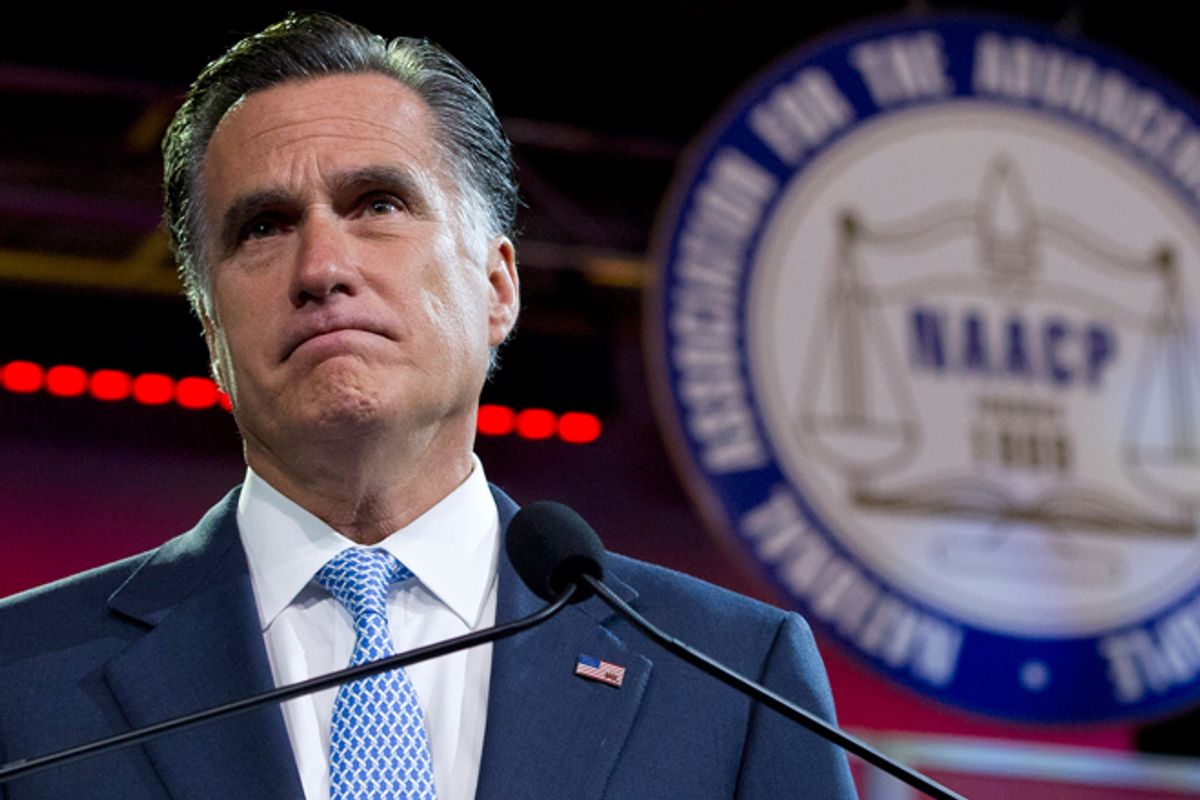 Mitt Romney just got booed while addressing the NAACP, and while I'm sure he didn't enjoy the experience -- this is not a man who enjoys being challenged or disrespected or even disagreed with -- I am pretty sure that his campaign is pleased with how the nationally televised appearance turned out.

Conservatives are happy with this speech, and they should be: The intended audience for it wasn't in the room.

When George W. Bush was attempting to explain what a "compassionate conservative" was, in 2000, he gave an address to the NAACP -- Bob Dole had refused in 1996, claiming the group was "trying to set me up" -- that was actually based primarily on common ground between his (still amorphous) philosophy and the goals of the civil rights group. Bush promised "strong enforcement" of civil rights law and then went on to talk about... education reform, which remains the one policy issue Republicans think will get them applause from black audiences. But Bush also brought up government programs -- ones that cost money! -- that he planned to introduce or expand to help low-income people, like child healthcare credits and the use of Section 8 to promote minority home-ownership.

In 2000, Republicans actually thought they had a shot at eroding the Democratic Party's long-standing advantage with minority voters, and Bush was legitimately attempting to convince black people to vote for him, or at least to lay some groundwork for future entreaties to black voters.

In 2006, after having refused the NAACP's invitations every year since taking office, becoming the first sitting president since Hoover to refuse to address the organization, Bush finally returned to the group's annual convention. This was the summer after Katrina. This time, he gave a much more defensive speech, and received a much colder reception, including boos (for charter schools!) and heckling. There was still hope, among some Republican strategists, that black voters might eventually give the GOP another look, but the plan wasn't really working out.

The Bush years, the resurgence of virulent white populism in the wake of the recession, and the great conservative Obama freakout basically destroyed all hope of the Republicans winning a significant portion of black votes in this generation. This time around, the Republican Party knows it's already a lost cause. Romney bused in 200 supporters to help out with a couple of applause lines, but this wasn't a serious attempt to convince black Americans to support him. The GOP's strategy this year is to depress turnout among young and minority voters, not attempt to win them over.

Instead it was an attempt to seem reasonable to potential (white) moderate votes and brave to his base, by agreeing to address an unfriendly crowd and delivering supposed hard truths. Getting booed by the NAACP for promising to repeal "Obamacare" helpfully reinforces the gross notion that the package is a series of benefits promised to Others and paid for by Hard-Working Regular Americans.

Romney also brought up his father, George Romney's, sterling civil rights record -- George Romney was an ardent anti-segregationist -- which, as usual, served to reinforce how cowardly and worthless Romney is compared to his father. George Romney took tough, unpopular stands on issues that sharply divided his party in the 1960s. He walked out on his party's presidential convention and called its nominee, Barry Goldwater, a racist. Goldwater's people won the battle for control of the party and their descendants are still in charge. One of Mitt Romney's first moves as governor of Massachusetts was to eliminate the state's Office of Affirmative Action with an executive order. He's no George Romney, and he has always known that if he wanted to be a Republican president, he couldn't ever try to be.