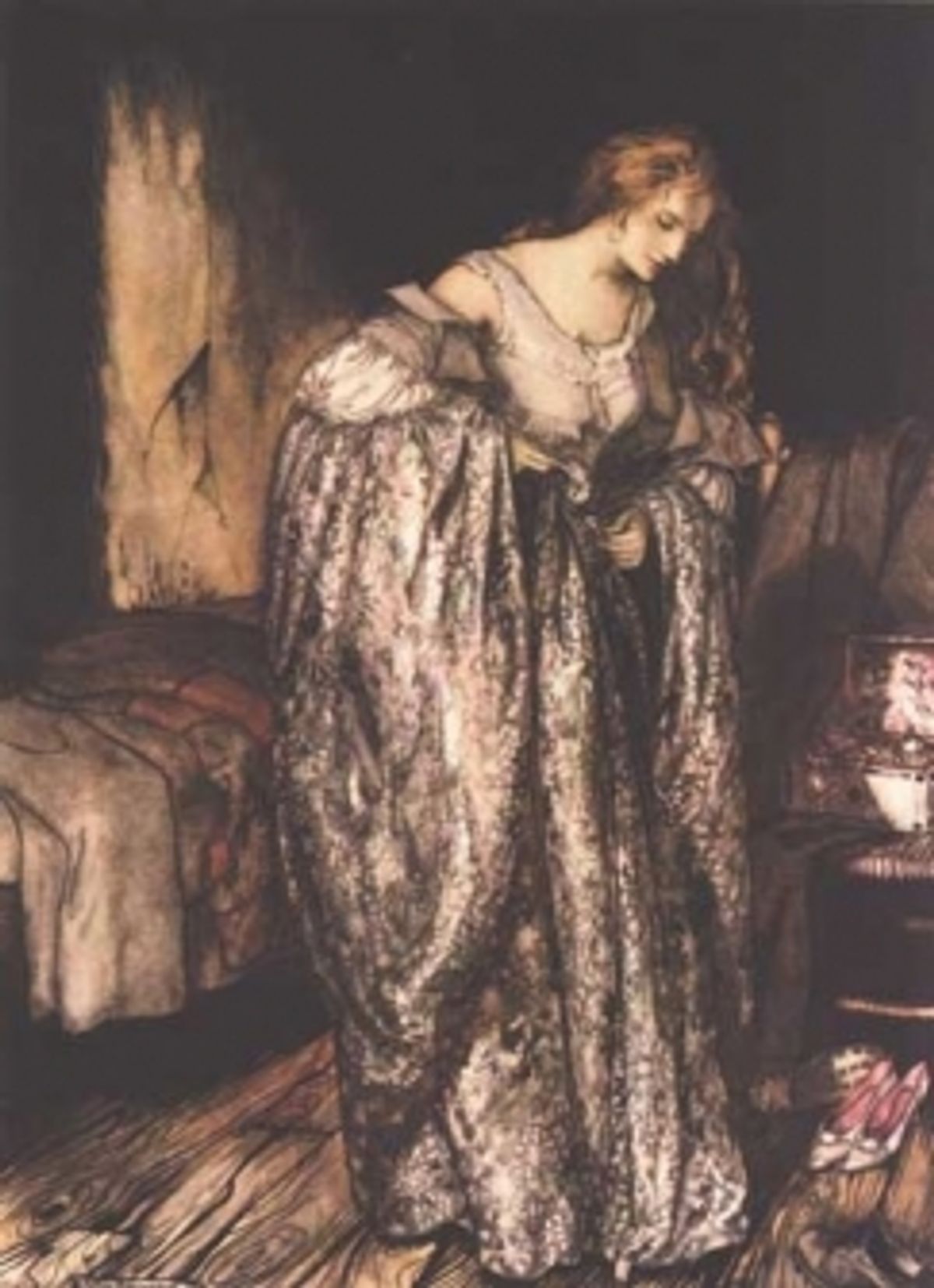 ON A GORGEOUS SPRING day in upstate New York, my friend and I sat in a patch of clover and listened to our four-year-old children play. “I have too many chores,” her daughter was saying to my son. “I can’t go to the ball.”

“I want to be Cinderella,” my son said.

My friend explained that her daughter was obsessed with the tale of Cinderella, and that they had read the Brothers Grimm version together many, many times.

“Do you read her the part where one stepsister cuts off her toe to fit into the slipper, and the other slices off her heel?” I asked.

I gathered the answer was no. I have taught fairy tales for several years, so I know the goriest details in several different versions of the Cinderella story, including in “Donkeyskin,” Charles Perrault’s unsettling tale of a princess driven into servitude by the threat of an incestuous father. I told my friend how, in “Donkeyskin,” the feminine accessory that proves the identity of the prince’s true love is not a slipper, but a ring that every woman in the kingdom tries to fit, even if it means shaving off the finger’s flesh until it hits bone.

Whether we think of Disney’s blonde beauty and her pumpkin carriage or Marissa Meyer’s recent recasting of Cinderella as a cyborg in the young adult novel Cinder, we know that there are countless modern retellings of the tale. We recognize a Cinderella story instantly, spotting the ordinary girl who deserves to be a princess in Twilight, and even in that book’s fanfiction offspring, the erotica novel Fifty Shades of Grey. On top of the many modern retellings, there are also a myriad of older versions that we might consider templates: not only Grimm’s “Aschenputtl” (published 1812), but also the Chinese “Yeh-hsien” (recorded circa 850), and Giambattista Basile’s Italian “Cerentola” (published 1634). Any consideration of the story we call “Cinderella” for simplicity’s sake must acknowledge that Cinderella has had a dizzying array of personae over hundreds of years, in several cultures. There is no one authoritative tale of Cinderella, only a hall of mirrors with a different face in each reflection.

One theme that older versions have in common, however, is the cultivation of a strong affinity between the main character and nature. In “Yeh-hsien,” the protagonist is given dresses and jewels by the magic bones of her pet fish. Another Chinese version of the tale, Lin Lan’s “Three Wishes,” portrays women reincarnated as animals. The beautiful young girl’s dead mother becomes a cow who aids her daughter with domestic tasks set by a cruel stepmother — until the stepmother kills and eats the cow. The Cinderella figure of that story, Beauty, is drowned in a well by her ugly stepsister, then transformed into a sparrow, then back again into a girl. The Grimm’s Cinderella has perhaps the most marked connection to nature. If the tale seems to emphasize the lowly status of Cinderella as a servant in her stepmother’s house, it is worth remembering that Cinderella is an employer of her own: she commands the birds to sort the lentils her stepmother has thrown into the ashes, and when she needs lovely clothes for the ball, she tells a hazel tree, “Shake your branches, little tree, / Toss gold and silver down on me.” Doves are her confederates, and when the stepsisters take knives to their feet in order to fit into Cinderella’s gold slipper, the birds warn the prince: “Roo coo coo, roo coo coo, / Blood’s in the shoe.”

This emphasis on nature may be due in part to a focus on transformation. Margaret Atwood, considering the influence of fairy tales on her writing, asked, “Where else could I have gotten the idea, so early in life, that words can change you?” Fairy tales are rife with transformation — from beast to handsome prince, from dirty scullery maid to well-dressed princess. It is perhaps no coincidence that nature in the Cinderella stories facilitates transformation, for nature itself is a changeable thing, from season to season, from a sunny day to rain, from an egg to a flying bird in a matter of weeks.

In the Cinderella stories it seems that nature serves an even greater role: as a source of power. While some Cinderellas are more in charge of their destiny than others, many of them get what they want by simply asking nature to provide. Marissa Meyer, when writing Cinder, went to great lengths to reverse this paradigm, and render her version of Grimm’s tale unnatural. The result is that her cyborg Cinderella possesses greater independence and power. In an email interview, Meyer said, “My main character's greatest assets (in my opinion) are her intelligence and resourcefulness, as shown by her ability to fix broken machinery and technology.” Manipulation of technology, the creation of energy out of inert objects, is indeed different from calling on the powers of nature.

In Cinderella stories, nature often functions in the place a fairy godmother, a figure we have come to think of as almost requisite to fairy tales. Although “Donkeyskin” does feature a fairy godmother, (one who is somewhat inept, and dispenses questionable advice on how the princess might escape her father’s lust), this character is largely absent from most versions of the tale. Instead, nature steps in, either in the form of fish bones in “Yeh-hsien,” or the hazel tree and birds in Grimm’s version. This parallelism between nature and the fairy godmother takes on intriguing significance when we consider the etymology of the word “fairy.” It comes from the Anglo-Saxon “fegan,” meaning to join or bind. “Fegan” suggests a sense of compulsion, and in most older versions of Cinderella, we can see how nature aptly fits these meanings, compelling the story toward its narrative end of a very particular kind of binding: the union of marriage.

The effect, I think, is to make nature seem to be in collusion with love. One message in some versions of the tale, particularly Grimm’s, is that love is like a force of nature, and nature will take its revenge on those who stand in its way. Many of the various cruel stepmothers and stepsisters meet violent ends. While Lin Lan’s ugly stepsister Pock Face is boiled in oil due to her own choice, in several tales her counterpart is punished by animals. The stepmother and stepsisters are pulled apart by wild horses in a Filipino version, and in the Grimm’s tale, birds pluck out the stepsisters’ eyes.

Such punishments, of course, are doled out in order to give readers the satisfaction of revenge without casting the protagonist in a negative light. Cinderella doesn’t blind her sisters; the birds do. The princess can have her happily ever after with no shade of guilt. Similar strategies are at work in other fairy tales. In Grimm’s “Snow White,” for example, the wicked stepmother is invited to the wedding dinner, and while she does not want to go, feels oddly compelled. Iron slippers heated over coals await her: “she had to put on the red hot iron shoes and dance in them until she dropped to the ground dead.” Interestingly, no one seems responsible for this punishment. In the original German, the tale’s end is carefully ambiguous. Snow White doesn’t make the stepmother go to the feast or put on the slippers — no one does. It simply happens, much in the way that someone standing in the full force of a hurricane’s gale will be pushed by the wind.

Ultimately, it may be these kinds of punishments, and the violent way in which villains attempt to force nature, that leave the most lasting impression. That day upstate with my friend and our children, I had thought that we were being quiet when we discussed how ladies in the Cinderella tales self-mutilate, how the bloody fingers and feet point toward a frustration with what nature has given. I had thought that the children hadn’t heard. But hours later, over dinner, my friend’s daughter turned toward me, knife in hand. “Tell me the part in Cinderella where the mean girls cut their feet,” she said.