The Villages: Where Republicans rule 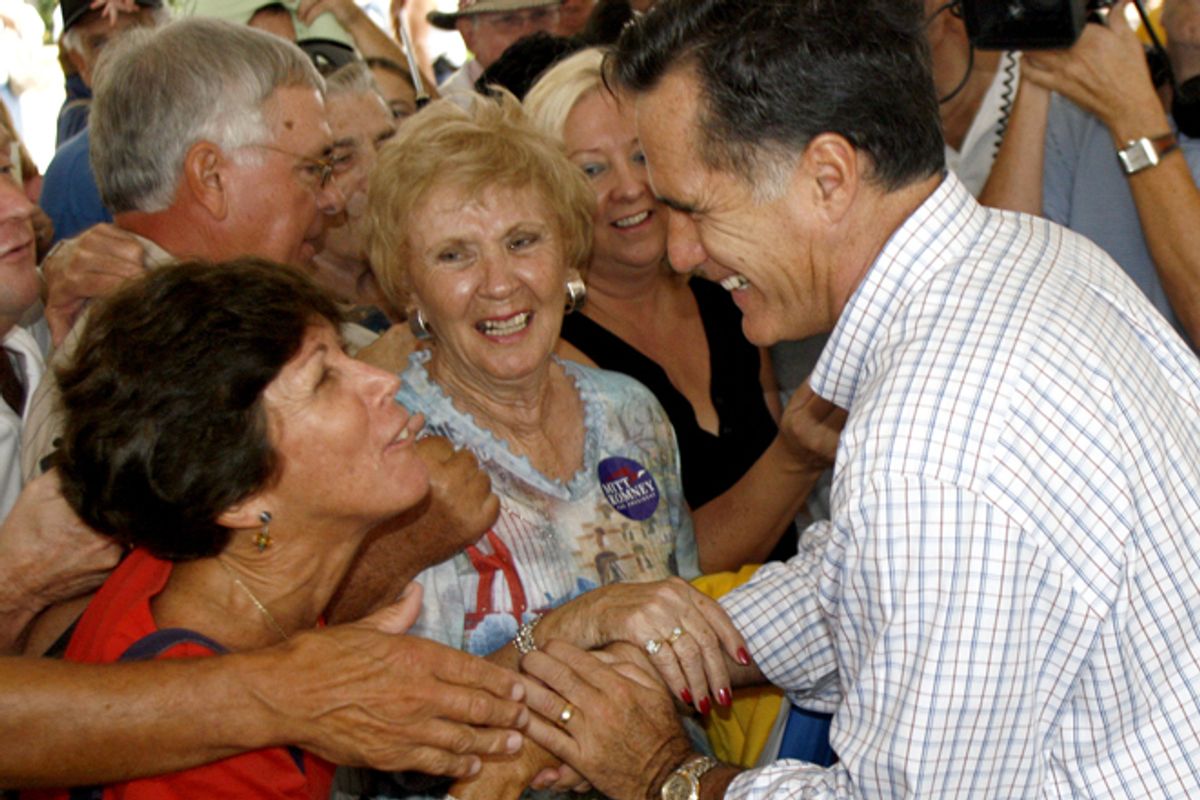 But Morse’s biggest contribution to Republicans may not be his checkbook, but his kingdom, the Villages. The massive retirement community, which has over 50,000 residents according to the 2010 recent Census, has become an ATM and must-visit stop for Republican politicians and conservative media figures. “The road to Washington goes through Tallahassee -- you have to win Florida -- and the road to Tallahassee goes through the Villages,” Rich Cole, the president of the the Villages Republican Club, who was also recently elected chairman of the county Republican Party, told Salon.

Mitt Romney has already visited four times and is expected to come again before the election, Cole said. So has every Republican presidential nominee since 2000. Florida Republican superstar Sen. Marco Rubio was there last week signing books. Every other major 2012 Republican presidential candidate swung through earlier, as did all the White House hopefuls in 2008, Cole said. Scott signed his first budget at the Villages. “Fox & Friends,” the Obama-bashing Fox News morning show, has broadcast live from the main square. So has Sean Hannity for his radio show. Glenn Beck, near the height of his power in 2009, selected the location to unveil his secret plan for conservative dominance. “Somebody’s always wanting to come here,” Cole said.

Fully 95 percent of the donations from the Villages’ 32162 ZIP code have gone to Republicans this year, according to the Center for Responsive Politics. “We are a hotbed of Republican politics, clearly,” Cole said.

Life as a liberal in the Villages is, not surprisingly, a bit lonely. But Democrats in the community say the challenges go way beyond a numerical disadvantage (whose magnitude they dispute), to outright opposition and harassment.

“When people are Democrats here in the Villages, it’s not something that they want to be known,” says Joe Flynn, who moved to the community from Connecticut seven years ago. “There are stories I can tell you about how they become ostracized from participating in golf functions, or any functions or any clubs once it’s known that they are Democrats. … I really don’t know how to describe it. It’s like we’re invisible."

Democrats in the Villages have countless stories of soft repression. While Republicans have a campaign headquarters office in the center of the town, Democrats have only one small table at the biweekly Market Nights, where residents set out wares to be sold in the town squares. Local Democrats claim two business owners told them they’d be “crazy” to lease office space to them out of fears of alienating Morse. In 2008, one restaurateur used his business to host campaign events and fundraisers for Democrats; local Democrats say he was gone when his lease was up. Waitresses at another restaurant asked for Obama pins, but requested they be slipped across the table under a napkin so managers wouldn’t see.

When Scott signed his budget at the community, members of the Democratic Club were barred from attending, and sheriff's deputies removed “those with anti-Scott signs or liberal-looking pins and buttons” from the crowd, the Miami Herald reported.

Morse controls almost everything in the Villages, as Brendan Coffey explained in a Bloomberg News investigation last month. Larry Shipley, the president of the Democratic Club, told Salon, “He owns the newspaper, he owns the radio station, and just about all of the businesses have to behave like they’re Republicans out of fear that they won’t get any more businesses out of the Villages -- and it’s a major employer in the area.”

Indeed, Morse sent a letter on Villages stationery, forwarded to Salon, to employees requesting that they donate to Mitt Romney. “Only in America could such a community be created,” Morse wrote on June 25, “but that America will soon disappear if we don't change the leadership in Washington, D.C. … That's why I'm asking you to join with me in the final push to put Mitt Romney in the White House. Electing Mitt will change the direction of our country, putting us back on the path of opportunity, growth and prosperity.”

Morse then laid out the details:

The Villages has been built by a lot of people with different skills pitching in. Today, I am asking all of you to, once again, "pitch in" by making a contribution to the Romney for President campaign. Any size gift will be greatly appreciated, but it must be a personal check payable to "Romney Victory, Inc." and it can't be more than $2,500 per person. If it is a joint checking account and the amount contributed is $5,000 per couple, please have both donors sign the check. You may also contribute using your credit card.

Karen Judd, the chairwoman of the the Sumter County Democratic Executive Committee, who does not live in the Villages, said Morse looms large in local politics too. Judd dismisses the notion that the area is overwhelmingly Republican -- “It is not a stronghold” -- but charges that Morse essentially runs the county like a fiefdom. She alleges Morse recruits candidates for local office “who are willing to take his perks.” Perks? “He’ll give them good tee times, coupons for the restaurants, travel, you know,” she said. Morse did not reply to several requests for comment.

Morse is also facing an IRS investigation over his use of tax-exempt municipal bonds and other activities.

Cole disputed these charges in an email, saying some of what chafes Democrats is rules that limit partisans from both sides from engaging in political activity on the campus. He also noted that several prominent Democrats have visited the community, including Vice President Joe Biden, and said “rumor had it they kept the event quiet so the anticipated small crowd (100-150)  would not be compared to the tens of thousands that attended the Sarah Palin event.” He added, “Mr. Morse and the Villages are successful business people. It makes no sense that they or anyone else would harass or malign residents or business because of party affiliation.”

No one from the Villages was made available to Salon, despite calls to its executive office. Morse is apparently a very private individual whom even Cole said he’s not worked with personally.

Still, the Villages' politics don't keep its liberals from enjoying it as a place to live. “It’s an absolutely terrific place to live,” Flynn said. “But it’s absolutely controlled politics, and they make no bones about it. … We call it the belly of the beast, and they pretty much tell you, you either learn to live with it or leave. There’s no other out.”