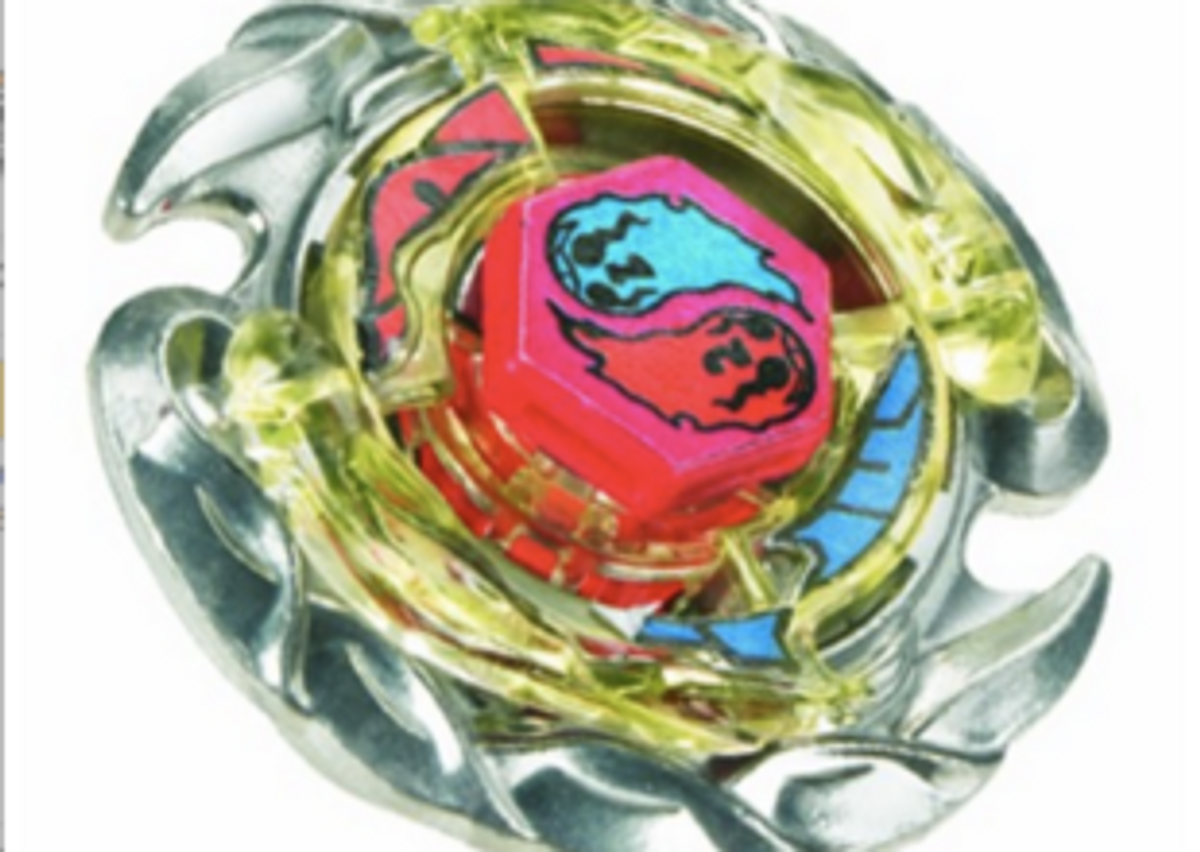 The emailed invitation had the solemnity and dash of a slap in the face with a duelist’s glove: “Beyblade Blowout,” it read. “My house. Be there. Saturday, 5-7 pm.” And that, in a sense, was what it was. The friend of my 8-year-old son Hudson had offered to host a sleepover-slash-smackdown at his place, featuring their school’s current “collectible creature” combat rage.

“Beyblade? What happened to Pokemon?” I asked. Hudson had, after all, invested more than a few birthday and Lunar New Year dollars in packs of Pokemon cards over the past few years, and now had a shoebox of them, most tucked lovingly into protective vinyl sleeves. I received an eyeroll in response.

“Daddy, Pokemon is just cards. These are real things that you can launch, and then they hit each other, and they have special powers, like fire and stuff,” he said, rattling off a list of names that sound alternately like indie bands or microbrews: Spiral Capricorn (I used to listen to them before they got famous!); Rock Leone (bottle or draft?); Twisted Tempo (uh, that one could go either way).

Despite the hipster-friendly names of the gamepieces, the actual game they’re used for is decidedly old-school. Beyblades are snub-nosed metal tops, modeled on beigoma, seashell-shaped spinning playthings that were originally invented in the 17th century, and that peaked in popularity sometime before World War II.

But Japan has always had a particular genius for mining the past to build the future — something I’ve often ascribed to the dual influence of Shinto and Buddhism, both of which deeply embed the idea that things never die, merely transform and reemerge. (Spiritual recycling, if you will.) Refreshed with colorful creature graphics, snap-on accessories and a ripcord-style high-speed launcher, and paired with a seizure-inducing cartoon series that’s best described as a 22-minute commercial interrupted by 30- and 60-second commercials, the battling tops have since spawned a burgeoning consumer fan base that generated $477 million last year for its global distributor, Hasbro.

That’s over 11 percent of the toy giant’s 2011 revenues, making Beyblade its second most lucrative brand — just behind robo-juggernaut Transformers, which generated $483 million in 2011 sales. Without the boost provided by the third installment of the blockbuster movie franchise, it’s likely that Beyblade would have placed first. And Beyblade is hardly spinning in place on the silver screen front itself: A live-action Hollywood adaptation of the toy franchise is currently under development from Universal Pictures and Illumination Entertainment, the creators of the CGI smash Despicable Me.

The secret of Beyblade’s success is straightforward. A starter Bey costs $12 and up; serious players will have dozens, along with the “necessary” accessories — arenas, carrying cases, extra launcher-ripper combos. And when you start playing, things get serious fast.

Beyblade is active and three-dimensional in a world where too much play is panel-based point-and-click. It has a flat initial learning curve — my 4-year-old son Skyler can “rip” as efficiently as his older brother — but a surprising amount of sophistication as one advances, both in selecting and customizing tops and in launch technique and placement. And the spinning neon tops are unquestionably...hypnotic.

They’re also an intergenerational win-win. For kids, Beyblades combine the gotta-catch-’em-all addictiveness of Pokemon, the snap-and-tuck manipulability of Transformers and the rock-'em-sock-'em aggression of nearly everything aimed at the 8- to 13-year-old male demographic. For parents, meanwhile, they seem like nostalgic throwbacks to a simpler and sweeter era of childhood play — the world of hula hoops and hopscotch, marbles and yo-yos.

But beneath that innocent-seeming exterior lurk some troubling concepts, which make me uneasy about my enabler role in Hudson’s serial addiction to these collectible creature-combat games.

Collecting things has always been a big part of childhood. I began hoarding comic books and baseball cards early in my youth and stopped, well, never. For me, both were sparks for aspiration. Reading and collecting comics was a gateway to writing and drawing them for myself; flipping through my baseball cards made me imagine myself as a big-league shortstop, an unlikely career outcome for a pudgy, uncoordinated, myopic kid like me, even in the era of PEDs. But it drove me to batting cages and games of catch and an immersion in statistical analysis that’s proven useful later in life.

Driving home after the big Beyblade brawl, I tried to get at the heart of my discomfort.

“So, how was it?” I asked him as he bounced in his booster seat. Hudson proceeded to reel off a string of highly technical explanations about how his Galaxy Pegasus destroyed his friend’s Burn Fireblaze, and the relative merits of the Diablo Nemesis and the Fang Leone.

He considered. “They have spirits in them. Bit Beasts. They’re like pets. But I guess they’re smarter than pets.”

“And you make them fight each other? Is that right?”

I suggested that he think about what it meant to own and control intelligent, living creatures; to make them fight and destroy each other. “Would you do that if you had a dog?”

“What if it were Boyblade, not Beyblade?”

That made him laugh.

“I’m saying, what if someone took you and made you fight someone else?”

“Daddy...these are toys. It wouldn’t be right to do that to people.”

So, okay. Childhood innocence isn’t dead. And I suppose I’d rather have my kids playing with toy tops than toy guns; despite — or maybe because of — my adamant anti-handgun views, my kids still have a tendency to convert any vaguely L-shaped object into a faux firearm, in one case actually biting their breakfast toast into the shape of a pistol and engaging in a pretend-firefight across the morning table.

But at some point, there’ll have to be a talk, won’t there? Because while childhood games often translate uncomfortable truths into entertainment, the reality behind them intrudes all too quickly and harshly.

In the game of Risk, nations invade at will and armies are obliterated with the roll of a die; a scan of the headlines is all it takes to see the true cost of military combat. The develop-at-all-costs real-estate speculation of Monopoly has no consequences when it’s being indulged in by thimbles, shoes and top hats. But over the past decade, that same rampant buy, build and flip behavior nearly destroyed civilization. And this isn’t even touching on the more literal depictions of violence, misogyny and ethnic stereotype that infest the world of videogames.

Not that the answer is banning or restricting games that offer up questionable or complicated content. That’s our job as moms and dads, after all: to translate and explain things that might hurt or confuse or mislead our kids, into terms and ideas that they can understand. And maybe in that sense, Beyblade and other such games offer an opportunity — the cliche, but nevertheless valuable “teachable moment” that marks an opportunity for parents and educators to spring into action.

So yes, at some point, Hudson will have that talk: About the human parallels behind the abstracted arena violence of these playthings; about gladiators and circuses, masters and slaves, about the long and ugly record of people buying, selling, trading and owning other people, and why yes, it’s not right, not then, not now, not ever.