Biden at NAACP: "It's good to be home" 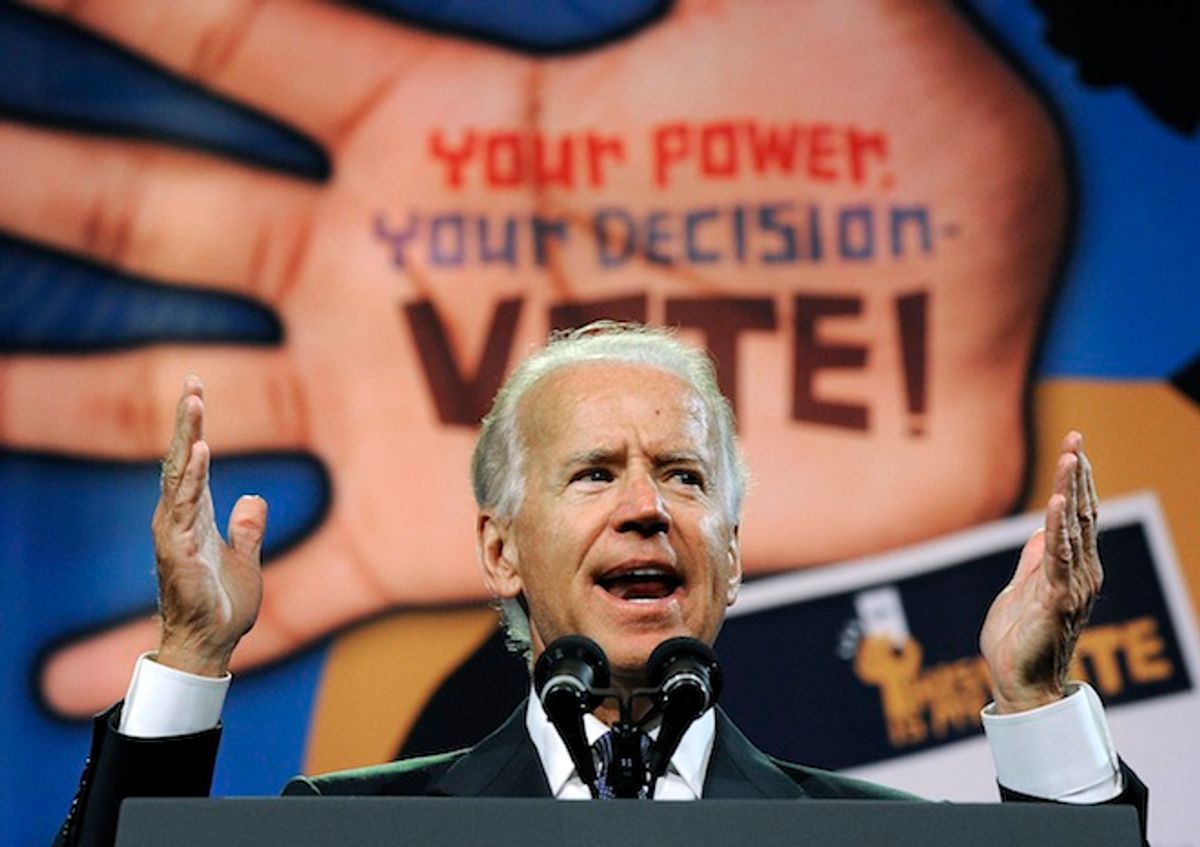 I finally understand why Mitt Romney got a standing ovation from the NAACP when he ended his disrespectful speech Wednesday: because it was over.

Like Romney, Joe Biden was booed by the civil rights group – when he signaled he was nearly finished by saying, "Let me close." This crowd didn't want to let Biden finish – and I don't think our garrulous VP gets that a lot. But Biden was everything Romney wasn't, making the Republican's awkward Wednesday appearance look even more ridiculous by contrast.

Hilariously, right-wingers are trying to foment black resentment of the fact that President Obama sent Biden to address the NAACP rather than going on his own. But Biden may have more cultural capital with the older-generation members of the group than the president does. He opened his speech by saying, "It's good to be home," and noting he's a lifelong NAACP member. He hailed old friends from his days in Wilmington, Del., including a "Rev. Wright" who Michelle Malkin, unbelievably, tried to insist was Chicago's Jeremiah Wright (You can't make this stuff up.) Biden also called out to a Delaware NAACP leader named "Mouse," who Biden said "got my back a bunch of times," when he was the only white guy at an early job. (The Obama-Biden campaign just emailed to say: “Clearly he [Biden] was referencing a different Reverend Wright -- the Vice President was referring to an old friend from Delaware.”)

Apart from his early shout-outs to the crowd, Biden mostly delivered his standard stump speech, with a little more call and response. He talked about Obama's decision to kill Osama bin Laden, laid out the campaign's extensive women's rights pitch, and detailed the accomplishments of the stimulus and the auto industry rescue. Nothing terribly different from what he says to other groups, although he noted Romney's tax plan, which cuts the Earned Income Tax Credit, would raise taxes for about 2 million African-American families while cutting them for the Romney family.

The speech was tailored to the NAACP on two issues: education and the one Romney wouldn't touch, voter suppression. On education, he mocked Romney for insisting class size doesn't matter, and that lowering class size might even hurt students, sneering, "Tell that to the private schools."

And on voting rights, Romney and Republicans "see a different future, where voting is made harder, not easier," Biden said, asking, "Did you think we'd be fighting these battles again?"

Biden ticked off Obama's accomplishments with fierce pride, calling the president "my guy," and exhibiting a widely shared anger at his treatment by the GOP. He was the right person to send to the NAACP after Romney's debacle. Reminiscing about being the only white guy at his Wilmington job back in the day, protected by his friend "Mouse,"  Biden is now the white guy who's got the back of our only black president when he needs it. This is why even though I'd love to see Hillary Clinton back in electoral politics, it's a crazy notion to remove Joe Biden as VP. He's absolutely the white guy for the job.