Manhattan's art of the dead

A series that explores the art of New York’s cemeteries 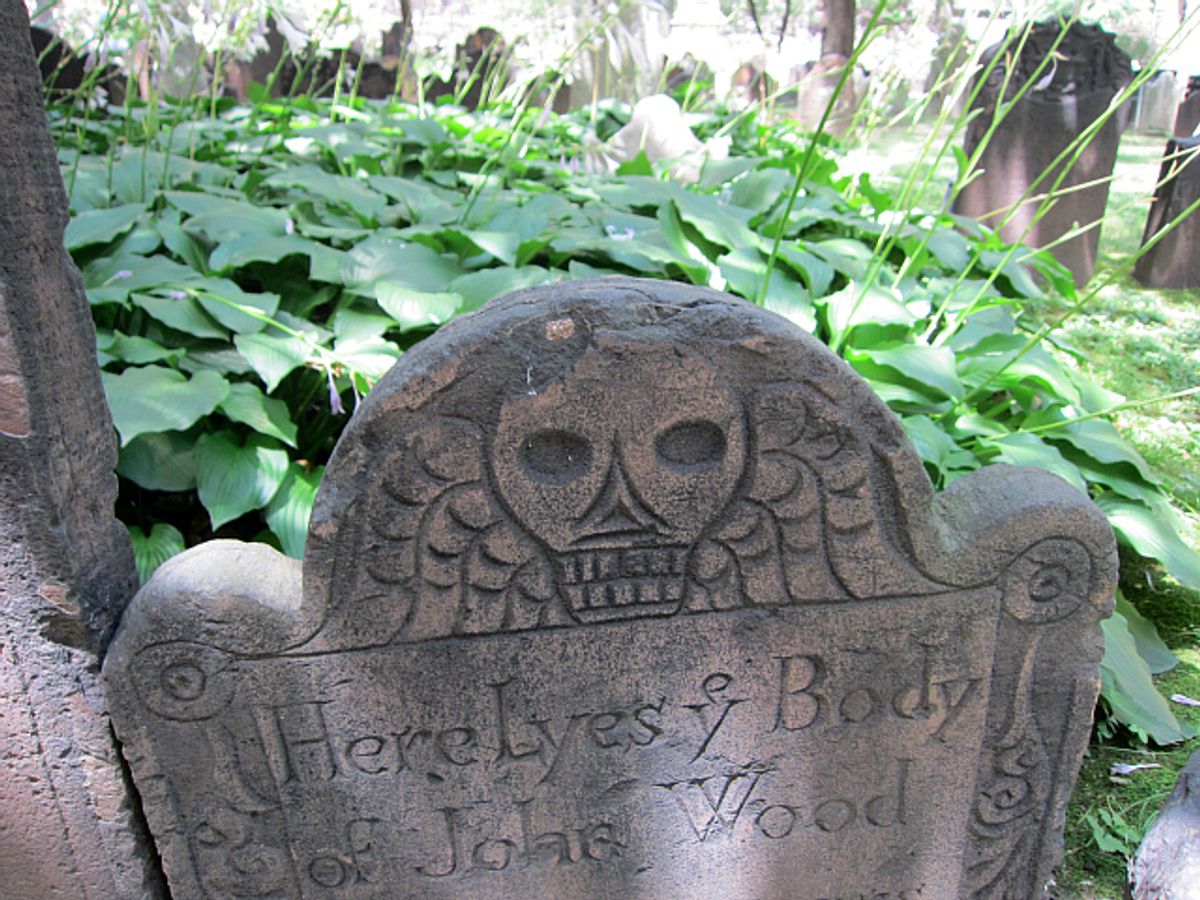 New York City’s population of the dead, like its living souls, has mostly relocated to the outer boroughs due to the overcrowding and high real estate prices of Manhattan.

Many of the island’s cemeteries were exhumed (although the bodies were not necessarily all collected, resulting in some skeletons lingering in the ground) during the past 150 years and reinterred in these new cemeteries, but there remain a few burial grounds embedded in the urban landscape of Manhattan, from gated lots so small as to be unnoticed, like First Shearith Israel Graveyard, the only surviving 17th century structure in Manhattan, to Potter’s Fields that have since become parks, including Washington Square Park and Bryant Park. The borough’s remaining active cemetery is Trinity Cemetery in Washington Heights, which, with Trinity and St. Paul’s churchyards in Lower Manhattan, is part of the Episcopal Parish of Trinity Church burial grounds, a group of three cemeteries that maintains a historic and artistic presence for memorial history in the city. Before rural cemeteries like Green-Wood Cemetery in Brooklyn and Woodlawn Cemetery in the Bronx were established, most New Yorkers were buried in churchyards. This started with European settlement in the early 17th century, and placed cemeteries right in the middle of everyday life with a heavy emphasis on the mortality of everyone. (A popular epitaph of the day was: “Where you are now, so once was I. Where I am now, so you will be.)

As the population of New York City grew, it became impossible to hold everyone in these small lots of land, with diseases like yellow fever, typhoid and cholera spreading from the piles of rotting corpses festering at intersections of busy city streets. Among these early churchyard cemeteries were those of St. Paul’s Chapel (with gravestones dating to the 18th century) and Trinity Church (with gravestones dating to the 17th century) in Lower Manhattan, and later Trinity Cemetery and Mausoleum were established by Trinity Parish in 1842 in Washington Heights. On entering the oldest of the Trinity Parish burial grounds at Trinity Church on Wall Street and Broadway, you are met by the vacant stares of carved skulls flanked with wings that top many of the 17th and 18th century graves. There are no soaring Victorian angels or ornate flowers decorating the tombs, but instead direct references to the shortness of life, including flying hourglasses (time flies) and winged souls with blank cherub faces. There is even a cryptogram on the 1794 grave of James Leeson in Trinity Churchyard that is deciphered to: “Remember Death.” The whole tone of the cemetery is ominous, a warning that life is short and to be pious and religious before your hourglass runs out and your soul flies away to the great beyond. The grave of Richard Churcher in Trinity Churchyard, dating to 1681, is the oldest carved gravestone in New York City, a memorial for a boy who died at the age of five. It is also rare in being a two-sided 17th century grave, with the epitaph text on one side and on the back a three-dimensional flying hourglass and skull and cross bones. The grave is impressive for its age and the surviving details of the carvings, but its creators were not looking to create a beautiful memorial sculpture. The city was still a long way from having its top artists and architects working on its tombs, and these graves in Trinity Churchyard were as much tributes to the dead as reminders that you are going to be next someday. Up Broadway between Fulton and Vesey is St. Paul’s Churchyard. While its graves date from 1704, a little later than Trinity Churchyard, its chapel is the oldest church building in Manhattan, built in 1766. The churchyard is directly across from the World Trade Center site, and it survived the September 11 attacks surprisingly intact. The chapel has served as an informal memorial site for people to gather and leave tributes, while the graves in its small cemetery, some scarred with structural damage, but many only with hundreds of years of New York decay, are reminders of the long sprawl of history that has unfolded over this one space of land. Trinity Churchyard contains many notable graves, most significantly that of Founding Father Alexander Hamilton, and St. Paul’s 800 tombstones include many historic figures as well, such as the actor George Frederick Cooke. In his lifetime he was a highly popular actor, playing Richard III to 2,000 people, but the story of what happened after he died is now most commonly associated with his name. Cooke’s skull is said to have been stolen from his grave and used in Edwin Booth’s production of Hamlet. Although this story is under some debate, what remains of the actor Cooke is interred beneath a monument erected by another great English actor: Edmund Kean. When Trinity Church ran out of space and burials were banned south of Canal Street, the parish established Trinity Cemetery in Washington Heights in 1842 (the mausoleum was added in the 20th century). The cemetery was designed by James Renwick, Jr., the famed architect of such buildings as St. Patrick’s Cathedral and the Corcoran Gallery of Art, and it includes four blocks between 153rd and 155th streets from Amsterdam Avenue to Riverside Drive, part of which sits on a rocky hill that swoops down towards the Hudson, mausoleums of wealthy families like the Astors and gravestones for people like Charles Dicken’s son Alfred Tennyson Dickens set over and into its slope. A beautiful bridge designed by Calvert Vaux, the co-designer of Central Park, once linked the east and west sections of the cemetery until it was destroyed in 1911 to make way for the construction of the chapel, but some of Vaux’s landscaping and retaining wall remain. Much like Green-Wood Cemetery and Woodlawn that were established in the mid-19th century, this new Trinity Cemetery was meant to be a peaceful park with a little more romance than the sober churchyards downtown. The land where Trinity Cemetery rests was once part of the estate of the artist and ornithologist John James Audubon, the creator of The Birds of America and other naturalist works depicting fauna in their native environments. Audubon died in 1851, and a monumental Celtic cross carved with birds on one side and mammals on the other, including a bat, buffalo, rabbit, deer, fox and squirrel, was put over his grave in 1893 by the New York Academy of Sciences. Detail on the grave of John James Audubon

Up Broadway between Fulton and Vesey is St. Paul’s Churchyard. While its graves date from 1704, a little later than Trinity Churchyard, its chapel is the oldest church building in Manhattan, built in 1766. The churchyard is directly across from the World Trade Center site, and it survived the September 11 attacks surprisingly intact. The chapel has served as an informal memorial site for people to gather and leave tributes, while the graves in its small cemetery, some scarred with structural damage, but many only with hundreds of years of New York decay, are reminders of the long sprawl of history that has unfolded over this one space of land.

It is the most elaborate grave in Trinity Cemetery and one of the most impressive memorials in New York City, with incredible detail in the lively animals that are animated in stone along its 16-foot height as tributes to Audubon’s art. On either side the animals are asked to “praise him and magnify him forever,” with “o all ye beasts and cattle” and “ye fowls of the air” called to “bless ye the Lord.” While exploring Trinity Cemetery, you may see some curious offerings next to the hundred year old graves, possibly left by people practicing Santeria. I came across this curious bundle of sticks with red ribbons, and also what appeared to be a dead rooster with its talons sticking out from a black plastic bag amid a crowd of eager flies. Trinity Cemetery, even with its landscaped paths and foliage, has an ominous edge to it that the cemeteries in the outer boroughs do not, being contained in Manhattan’s populous grid as a quiet space where burials are still held, as well as other religious acts that make it more than just a place of the past. With the two downtown Trinity Parish cemeteries, it represents the progression of memorializing in New York City as urban life and death expanded through the reaches of Manhattan over the past four centuries.

Allison C. Meier is a freelance and fiction writer based in Brooklyn. Originally from Oklahoma, she has been covering contemporary visual art for print and online media since 2006. You can read about her New York and world travel adventures on her blog.