Mitt's real insult to the NAACP 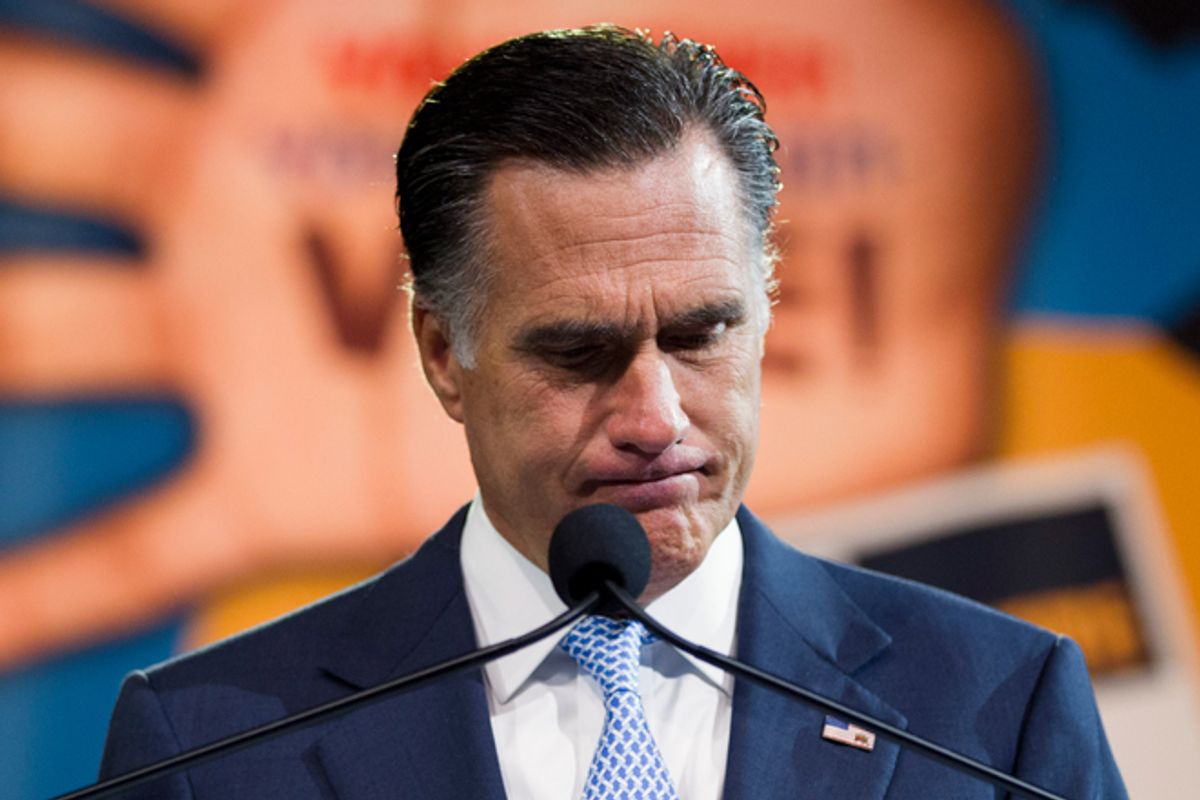 I have to admit, I started out giving Mitt Romney some credit for agreeing to address the NAACP. I'm a sucker for the make-nice gesture in this age of political division and cruelty. Republican presidential candidates have been known to snub the group's annual gathering: Bob Dole did in 1996, and while George W. Bush attended in 2000, when he was promising to be a compassionate conservative, he skipped it in 2004, when it was clear that he was not.

I knew Romney's visit was mainly designed to make him appear reasonable to white swing voters who are a little worried about the GOP's wingnuttery when it comes to our first black president. Still, I thought it was a mildly reassuring symbolic gesture that might serve to keep the chasm between African-Americans and the GOP from turning into a dangerous canyon.

I expected it would be awkward; Romney is awkward with every group. But I didn't expect Romney to be so unbelievably disrespectful.

Let's be clear: Going to the NAACP and sneering derisively at "Obamacare" was an act of disrespect. There was a way to frame his opposition to Obamneycare – I mean, the Affordable Care Act – in policy terms. By using the right's term of choice, "Obamacare," which serves to underscore that it's our first black president's signature achievement, Romney was being deliberately provocative – and he got the boos he wanted, so now he can boast of his ability to speak truth to the not terribly powerful. (Although the group gave him a standing ovation when he left, a sign that they have more class than the gazillionaire who wants to lead the nation.)

In case you're not clear about his motives, Romney later told Fox News, regarding the boos: "I completely expected that, of course, but I'm going to give the same message to the NAACP that I give across the country, that it's killing jobs." He got nastier at a fundraiser in Montana Wednesday night, according to a pool report, telling supporters about his NAACP critics: “Remind them of this, if they want more stuff from government tell them to go vote for the other guy -more free stuff. But don't forget nothing is really free." Some Romney supporters are even more vicious in making political use of his NAACP reception: Rush Limbaugh is  now saying the Republican candidate was booed "simply because Romney's white."

Romney's disrespect confirms what we already know: He's content to be the leader of a party that gets almost 90 percent of its support from white voters alone. They can only get away with it, in a country that's only 64 percent non-Hispanic white (and dropping)  by making it tougher for non-whites to vote. So that's what they're doing. And it's against the backdrop of the GOP's voter suppression movement that Romney's cavalier treatment of the NAACP is particularly outrageous.

It's no coincidence that a day earlier, also speaking to the NAACP, Attorney General Eric Holder called the GOP's most egregious voter suppression laws "a poll tax," invoking Jim Crow era maneuvers struck down by the Voting Rights Act. Romney didn't even mention the issue in his speech, probably because he supports the GOP's voter-suppression movement, remarking during the primaries, "I like voter ID laws, by the way … more of them." So Romney actually had the gall to tell the nation's oldest civil rights group, which has fought for a century to expand voting rights for African-Americans, that he'd be a better president for African-Americans than Obama, whose Justice Department, under Holder, is fighting the new wave of voter restrictions that are rightly compared to a poll tax.

And it's particularly awful that Romney gave his speech in Texas, which passed one of the most restrictive voter ID laws in the nation, one that's being challenged by Holder  (the issue is before a federal judge this week). The Justice Department says the law would disenfranchise 1.4 million Texas voters, almost a million of them Latino. The Nation's Ari Berman, who's doing some of the best reporting on voter suppression, explains why:

And if voters can make their way to a government office that provides ID, they'll need documentation of their eligibility, and the cheapest option is paying $22 for a birth certificate – which is what leads Holder to accurately call the law "a poll tax." More than 20 million Americans, nationwide, don't have the government-provided documentation required by these new laws, including a quarter of all African-Americans.

Make no mistake, these laws affect white people, too, particularly white college students. Holder noted that in Texas, "concealed handgun licenses would be accepted forms of identification, but student IDs would not." That's no accident. A New Hampshire Republican made his party's agenda plain when he defended his state's law invalidating student IDs as a form of voter documentation. "Voting liberal, that's what kids do." And in New Hampshire, they're by and large white kids. So the GOP has a plan to stop them too.

If you're noticing a trend, you're right: Young people, African-Americans, Latinos – that's the Obama coalition. Since those groups surged to the polls in 2008 to elect the president, Republicans have been almost as aggressive passing laws restricting voting as they have restricting women's reproductive rights. (That may have the opposite effect politically.) Remember Madam Range Rover at Romney's Hamptons soiree, complaining "the common people" didn't get it? The misinformed hoi polloi, she lamented, all had the right to vote, but she singled out "my college kid, the babysitters, the nail ladies" -- all less likely to have voter ID than wealthy white people.

To be fair, the GOP has always complained about Democratic voter fraud – which essentially doesn't exist: The Bush Justice Department conducted an exhaustive voter fraud investigation, but only prosecuted 86 cases in seven years, and most were felons who thought they had the right to vote but didn't. MSNBC's "The Cycle" co-host S.E. Cupp defended the GOP's voter ID crusade as worth it to eliminate those 86 cases of voter fraud over seven years in a nation of 300 million, even if it risks disenfranchising 21 million people. (Have you noticed that conservatives are the radicals lately?) Rooting out nonexistent voter fraud only became a GOP jihad, however, after Obama's election. Pennsylvania Republican Mike Tarzai was nice enough recently to explain why, bragging that his state's new voter ID law "is going to allow Mitt Romney to win the state of Pennsylvania."

That's why voter suppression may be the nation's top civil rights issue today (the drug war has to be a runner-up). A man who supports that movement can't be considered a better president for African-Americans than Obama. That was Romney's real insult to the NAACP; deriding "Obamacare," however deliberate and offensive, can't compete.