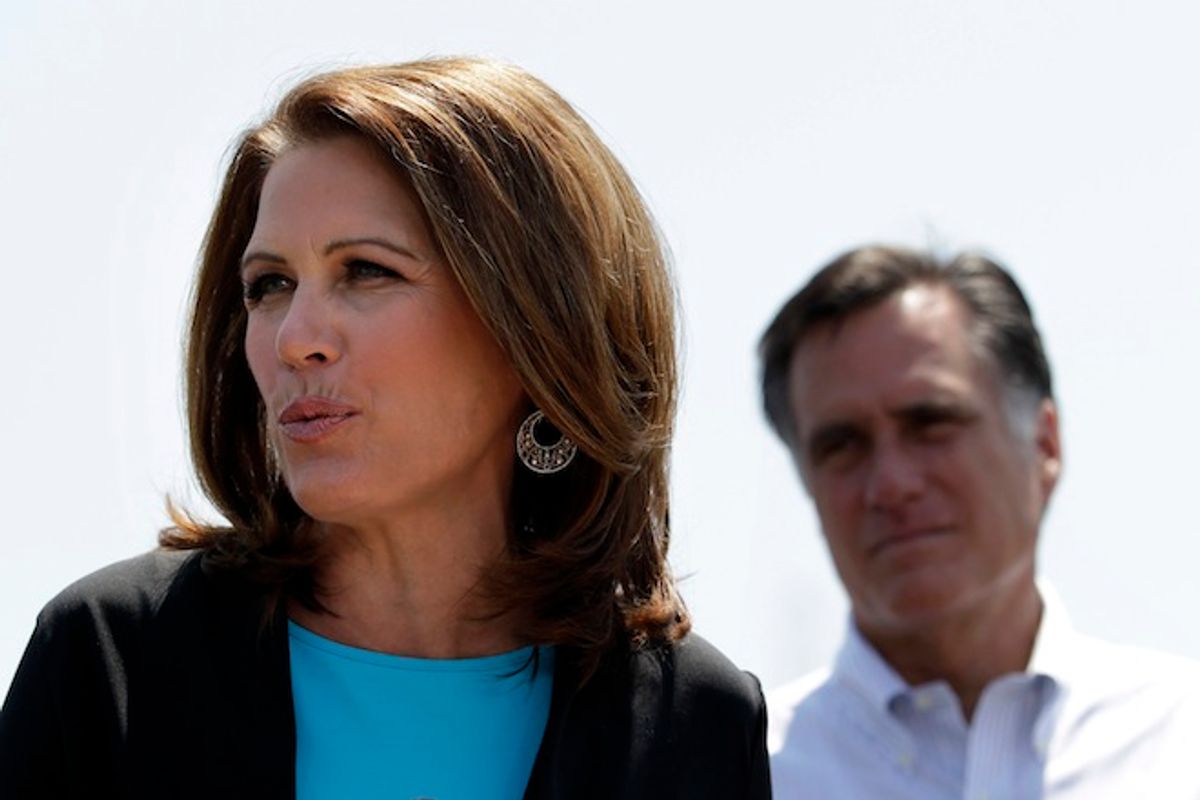 The tide of Islamophobia that threatened to drown the political scene in the summer of 2010 during the debate over what critics called the “ground zero mosque” has since receded and Muslim conspiracy theories have largely vanished from the political debate. But with another election looming, the tide may be rising again, and Rep. Michele Bachmann is predictably already ahead of the crowd.

The Minnesota Republican, joined by Republican Reps. Trent Franks, Louie Gohmert, Thomas Rooney and Lynn Westmoreland, sent letters to the inspectors general of five government agencies responsible for national security to demand they investigate infiltration by the Muslim Brotherhood into the highest reaches of the federal government. In particular, Bachmann singled out Huma Abedin, the wife of former congressman Anthony Weiner and a top aide to Secretary of State Hillary Clinton. In case Abedin hasn’t already been through enough already, Bachmann is now questioning her loyalty to the U.S. by asserting that Abedin has three family members who are connected to the Muslim Brotherhood (Abedin is Muslim). She’s been targeted before by anti-Muslim activists, and Bachmann notes that Abedin’s position “affords her routine access to the Secretary and to policy-making.” Bachmann also claims the state has “taken actions recently that have been enormously favorable to the Muslim Brotherhood and its interests.”

Another letter targets the Department of Defense, which Bachmann et al. accuse of failing to “characterize accurately the jihadist motivations” of Maj. Nidal Hassan, the Army psychiatrist accused in the Fort Hood shooting. A third letter went to the Department of Homeland Security, alleging the department is covering up the Muslim Brotherhood threat by developing an official lexicon that obfuscates its danger. Yet another letter went to the Department of Justice inspector general warning that officials there had been meeting with Muslim groups that she accused of being “fronts” for the Brotherhood. The final letter went to the Office of Director of National Intelligence, stating, “we request that your office conduct a formal investigation or evaluation into the extent to which Muslim-Brotherhood tied individuals and entities were involved in” actions they deem improper.

In an interview with the American Family Association's Sandy Rios late last month, Bachmann explained, “It appears that there has been deep penetration in the halls of our United States government by the Muslim Brotherhood. The Muslim Brotherhood has been found to be an unindicted co-conspirator on terrorism cases and yet it appears that there are individuals who are associated with the Muslim Brotherhood who have positions, very sensitive positions, in our Department of Justice, our Department of Homeland Security, potentially even in the National Intelligence Agency.”

If it sounds familiar, it’s because the late Sen. Joseph McCarthy made almost identical accusations about Communists infiltrating the U.S. government several decades ago.

Bachmann’s fellow Minnesota congressman, Keith Ellison, a Democrat, wrote a letter to Bachmann and her co-signers yesterday demanding they provide evidence to support their accusations, or drop their claims and clear Abedin and others’ names.  “I request that you provide my office a full accounting of the sources you used to make the serious allegations against the individuals and organizations in your letters,” Ellison wrote.

So what is Bachmann’s source? Every one of her letters prominently cites Frank Gaffney, a former Reagan defense official who has become one of the country’s most prominent anti-Muslim conspiracy theorists. Gaffney heads the Center for Security Policy and has for years been preaching to anyone who will listen that the Muslim Brotherhood is secretly infiltrating every aspect of American life in a grand scheme to impose Shariah law when we least expect it. For Gaffney, everyone is an agent of the Brotherhood, including CPAC, the big annual gathering of conservatives in Washington, D.C., and Grover Norquist, the prominent anti-tax activist who is married to a Muslim woman.

As I exclusively reported in February, Gaffney’s persistent attacks against fellow conservatives got him booted from the American Conservative Union, the organization that puts on CPAC and includes notable hawks like former U.N. Ambassador John Bolton. As Ellison explained in his letter, “Mr. Gaffney’s views have been widely discredited, including by the Federal Bureau of Investigation and conservative organizations … After the ACU board conducted a full investigation of Mr. Gaffney’s accusations against Grover Norquist and Suhail Khan, the board found Mr. Gaffney’s accusations ‘reprehensible,’ ‘baseless’ and ‘false and unfounded.’ The ACU even barred Mr. Gaffney’s participation from CPAC in 2011.”

Gaffney has since been ostracized from several other key conservative groups, yet Bachmann apparently feels justified demanding official investigations based on his theories. Unfortunately, if the precedent of 2010 proves predictive, this likely won’t be the last conspiracy theory we hear about Muslims from conservatives before November.