"Louie" gets a male crush

In a brilliant new episode, Louie explores his confusion when flummoxed by genuine feelings for another guy 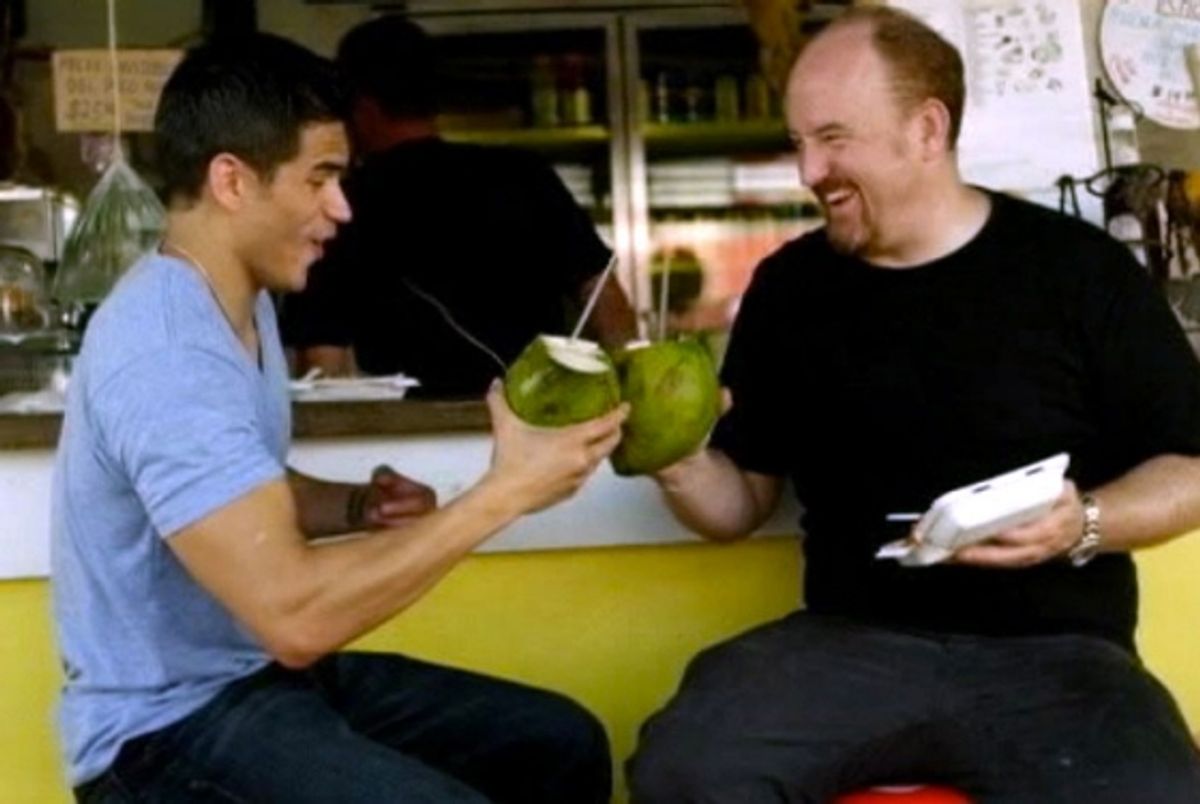 In last week’s episode of “Louie,” Louie waxed rhapsodic about his daughter’s jokes. When she starts a joke (“Who didn’t let the gorilla into the ballet?”) he can’t tell where it's  going to end up. And three episodes into the new season of “Louie,” I remain convinced that this is the guiding metaphor of season, if not the show. “Louie” is going to start with a joke, a premise, and even if you think you know where it’s going, you are not going to be able to tell where it ends up. Or at least, that’s the ambition.

In the first episode, Louie played around with the “how you get someone to break up with you” premise. His solution: Do absolutely nothing, which backfired when he was eviscerated by a woman pointing out just how lazy and pathetic it is to not be an active participant in one's own life. Last week, Louie riffed on the “If a woman rapes a man, is it rape?” premise in the fabulous Melissa Leo episode, that concluded something like, this premise is flawed, there is no equivalency, it's just different. (I am really relieved that this episode aired a few days before this week’s wretched Daniel Tosh rape joke incident, and Louie’s not-so-awesome Twitter defense of Tosh, if only so the episode itself did not get caught up in a baby and bathwater situation.)

Last night’s episode was an exploration of the “no homo” phenomenon, in which the safe space heterosexual men create for themselves with “no homo” assurances is upended by the little bit of homo always implicit in having to say it in the first place. In the episode, Louie was down in Miami for a show. Out of place among the beautiful people, he went for a swim and though he wasn't drowning, he was rescued by an extremely attractive, fit, lovely Cuban lifeguard named Ramon, who takes a liking to Louie and proceeds to show him a great time around town. Ramon is a total dreamboat, a warm, open, sweet guy who seems entirely unconcerned about people’s perception of his sexual orientation — he’s friendly to Louie in a way another middle-aged white guy like Louie might perceive as being too forward — and turns Louie’s trip around, saving him from eating hamburgers alone in his hotel room to having a great time in the “real Miami.” With Louie’s trip winding down, he’s had such a good time with Ramon, he calls up his ex-wife to see if she can stay with the kids so he can stay longer. She immediately assumes he’s hanging around because he’s met someone. It’s in this conversation — in which Louie continually denies that he has met someone — that the pin drops for Louie. In fact, he does want to stay because he’s met someone. What does that mean?

Louie doesn’t have the chance to parse this set of feelings on his own time. His decision to stay sets off Ramon’s no homo alarm bells, and he sits Louie down to explain that he’s not gay. This scene, like last week’s scene with Leo, is astounding, and also thematically paired to the scene from the first week in which Louie doesn’t say a word. Here he can’t stop stuttering, hemming and hawing: "I’m not ... OK. I don't judge anything, but ... I have zero anything, OK? I guess the thing is, I feel like… I’m not ... it’s just ... I don't know if I ever ... I'm not trying, I’m not trying anything ... and I'm not.”

I’m 100 percent with Slate’s Jonah Weiner in thinking that the reason Louie just doesn’t come out and tell Ramon he’s not gay is because Louie really does have feelings for Ramon, and it's those feelings he finds so impossible to articulate. Louie knows how this conversation is supposed to go, and if he were on Ramon’s end of things, he would be able to conduct it in his sleep. Like last week's scene with Leo, Louie finds himself in a role reversed from his usual one, and he is so flummoxed by this and his feelings, he can’t quite even get it together to lie, or deny. He’s too confused. Vulnerable and at sea, Louie flails around the conversation, unable to locate the no homo floatie he would usually cling onto in such a situation. Just like when he first met Ramon, Louie's not drowning, but he does need rescuing: This time, however, Ramon's not there to drag him out of the water.

As with all of "Louie's" best scenes, the thing that seems so admirable here is its honesty. Louie has a real crush on another man, no no homo. Who knows what would have happened if Ramon had reciprocated— maybe absolutely nothing. Louie is trepidatious and hesitant, and I’m not sure that I could see anything happening between them, but just Louie having to acknowledge his feelings to himself, and to Ramon, is fascinating enough.