Once a seasoned traveler, I'm now stuck in cubicle tedium. I set out to recapture the thrill, or something like it 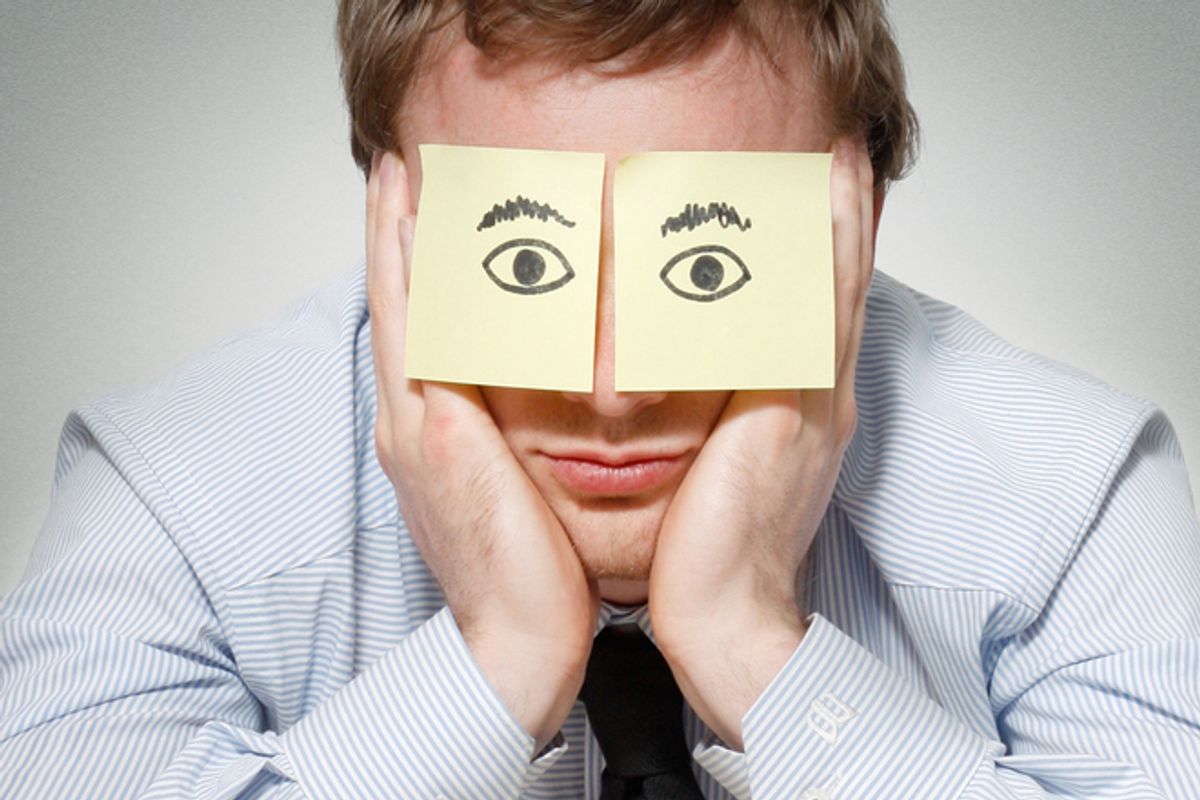 Compared to the IT guys who work down the hall or to the mother of two who sits in the cubicle next to mine, I’ve led an adventurous life. Lest we split hairs about the notion that being a mother is an adventure of an entirely different kind, for the purpose of this writing, I’m going with a more traditional definition of the term.

I’ve been surfing in Indonesia and Barbados, scuba diving off the southeast coast of Africa, trekking in Malaysia and Thailand, and motorcycling in East Timor. I’ve been in a screaming match with an army colonel, caught in the middle of a riot and interrogated by a government official who was convinced I was a spy. I’ve been on the Zambezi River in a johnboat. I’ve been to Swaziland.

But that’s all gone now, a distant memory of a different life. Now I have the life I never believed I would have, the one I resisted for so long: a cubicle with a window view that looks out at the manicured shrubs of a mixed-use development that’s supposed to look like a small town – a “Truman Show” backdrop to the soul-crushing tedium of office life.

When I worked in Mozambique, the security guard in my office had a Kalashnikov next to his desk. The receptionist where I now work reprimands us when we leave food in the office fridge and gets my name wrong once a week. In East Timor, I drove a Toyota Land Cruiser Troop Carrier equipped with brush guard, carburetor snorkel and two spare tires on the roof. Now I drive a 1999 Volkswagen with Yakima racks. I used to eat water buffalo and fruit bat. Now I keep vitamins in my desk drawer. I used to be on the District Security Committee. Now I’m on the Retreat Planning Committee.

I never used the word "adventure" back when I was blissfully in the middle of it. Only now, as I face the sugarcoated mediocrity that is starting to look like the rest of my life, am I free to lament this term. If only I’d known then what I would be facing later in life, I would have been shouting from the rooftops, "I’m an adventurer, damn it!"

While packing for a recent overnight trip on a makeshift watercraft, my lovely wife, with that ever-present twinkle in her eye, said, “Have fun on your little adventure!” The former me would have been incensed, but the present me couldn’t even muster the ignobility to shake my fist in the air while shouting, “I’ll show you!” And even though she’d said it with thinly veiled sarcasm, I started to reconsider my definition. Maybe what I was doing had the makings of adventure. It was ill advised. I was unprepared. And my spouse thought I was nuts.

You may not call it adventure, either. Because, if you’re like me, your idea of adventure does not include throwing an ancient, behemoth windsurfer on top of a 12-year-old station wagon, driving to a manmade lake that sits within farting distance of a semi-major metro area, repurposing said windsurfer as a stand-up paddleboard using an old canoe paddle, and setting off on this manmade lake with no plan or purpose other than finding a decent place to camp for the night.

The windsurfer was a “wedding gift” from an old friend of mine, delivered to me nearly two years after my wedding. The parts were so mismatched that the rig barely worked; I could never get the sail reasonably taut, and there was never any wind on my local lake. The sail got retired to the shed, which is where I found the canoe paddle and had my eureka moment. Stand-up paddleboard. That just might work.

Any adventure should start with careful planning, and my planning included casually perusing several nonspecific maps of the lake online while sampling a few microbrews on a Thursday night. On Friday morning, I packed my gear into a dry bag while shaking off a mild hangover, strapped the board to the top of the car and bravely set off into the unknown suburban wilds.

The lake in question sits on the edge of North Carolina’s Raleigh-Durham area, a tame, boring sprawl of suburbs that’s home to around two million people, so it’s not as though I was in any danger of getting lost. You could blindfold me, slip me three hits of acid and drop me off at any point on the shoreline and I still wouldn’t be able to get lost. Were I to wander through the woods in any direction, I’d stumble onto a cul-de-sac in a couple of hours. But with 14,000 acres of water and 180 miles of shoreline, I thought I might at least be able to fake it.

By the time I’d found a place to park that was out of the way and reasonably close to the water’s edge, dragged the 60-pound board to the water, and attached my gear, it was nearly two o’clock and approaching 90 degrees, and I’d gotten a rusty fishing lure stuck in my shoe after stumbling over a sun-faded Miller High Life can. Champagne of beers, indeed.

When I finally struck out on the lake, I soon discovered that either my lack of practice or the unwieldy weight of the gear made my rig considerably wobblier than I’d imagined. It was also torturously slow. Still, I managed to get it to track straight enough, and after a few minutes, I fell into what could be looked back on nostalgically as a meditative rhythm. At least until the spiders came out.

It took me a few seconds to understand how dozens of spiders could have spontaneously appeared on my foot while I was paddling in the middle of a lake, but then it occurred to me that the board had been stored behind my shed for several years and that the hole where the sail mast attached would be as good a place as any to set up residence if I were a spider. This discovery led me to 1) squeal embarrassingly, 2) quickly vacate the board with a maneuver that probably resembled a Jesus Lizard doing a belly flop, and 3) slap frantically on top of the board like someone in a patchouli-clouded drum circle. As I scrambled back on, I noticed two guys in a bass boat trolling about 50 yards away, and I wondered how it was that my finest moments have always included an audience.

When I was finally moving again, a ski boat loaded with 20-year-old girls passed about 25 yards away. When the skier fell, they slowed to a near standstill, so it was a little surprising when, dumbly staring at them and grinning, I was thrown off balance by their slow-moving and seemingly innocent wake. Again I fell into the drink, and I enjoyed another brief but frantic moment of spastic flailing when I discovered, to my surprise, that the lake had a significant current, my board was getting away from me, and not only would it be a long swim to shore without it, but that it also had all my stuff attached.

Failure leads to progress – or something like that – and once I had these two lessons out of the way, I managed to explore the shoreline for several hours without further incident. Stumbling around in the woods just beyond the beach, I happened on a clearing in the trees, broad and flat, with an area big enough to pitch my tent. Out along the beach were driftwood sculptures, a fallen tree that made a good bench, an infinite supply of perfectly formed skipping stones and a deep, burning sunset that was slowly bleeding out across the lake. In the distance, I could hear someone playing Kid Rock on a boat’s stereo system, but that was soon swallowed up by a manic symphony of tree frogs.

As the light faded and the edges of the trees went soft, I wanted to congratulate myself on some sort of accomplishment. I wanted to be able to come back with a quirky story about the Real Meaning of Adventure, a new understanding of the ways in which I am destined to meld my former self with a new, more normal, more formal life. I wanted to be able to say that adventure is what we make of it, that opportunities are all around us. But the truth is that my new life feels nothing like my old one. This life I’ve chosen seems entirely incongruent with my instinctive urge to strike out into the wild, reckless heart of the world. I am anchored by family and circumstance, including a wife whom I love and who has a stable, growing career where we live and my mother, who lives by herself nearby and increasingly needs my support.

When I started this writing, I wanted it to be one of those profoundly optimistic screeds, and maybe you thought this was leading to that telegraphed payoff, that shallow, contrived epiphany. You thought, and maybe I did, too, that what I would say is that the journey is the adventure, and that each of us — we modern family types with our Netflix streaming and our growlers of craft beer — still have it in us. That we can strike out on scrappy, blundering little journeys that will inspire us to come back to our regular lives and find peace with that cubicle warrior we’ve become.

And this is not to say that my smaller moments aren’t valuable, but for me to call them "adventure," to look back on what I’ve done and to give anything in this new life the same name, would be nothing short of wishful thinking. And no ill-advised trip on a broken-down windsurfer can change that.

Jonathan Kime lives in North Carolina and works for an international health organization. His writing has been nominated for a Pushcart Prize and has appeared in The Sun, McSweeney’s Internet Tendency and Men, Ink., where he is currently Editor at Large.