"The Dark Knight Rises": Does Christopher Nolan's "Batman" hold up?

We revisit the first films of Christopher Nolan's trilogy, filled with thrills and a biting critique of America 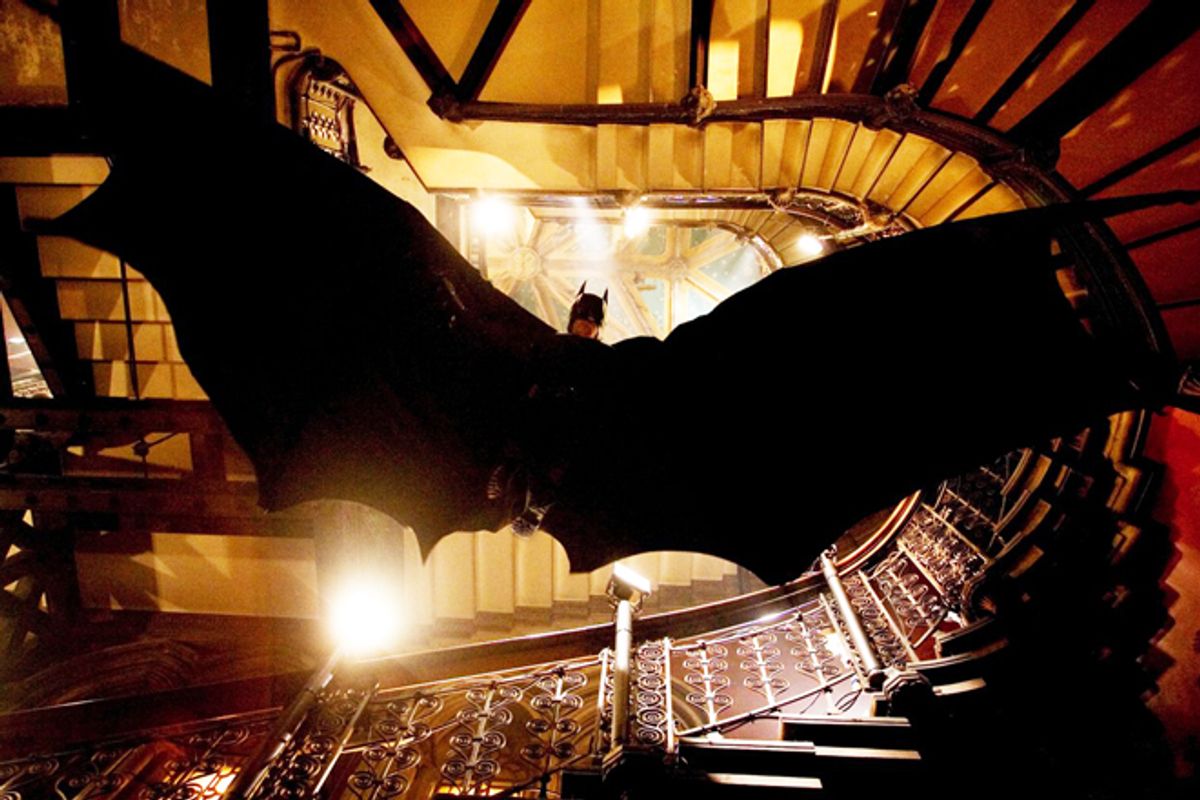 This coming week brings us the last big Hollywood spectacle of the summer and, even allowing for the immense success of Joss Whedon's "The Avengers," the one that arrives burdened with the most anticipation and the most philosophical heft. Christopher Nolan's "The Dark Knight Rises" will apply the capstone to a trilogy that's not quite like anything else in the history of cinema, a massively ambitious attempt to blend an existing superhero mythology, the cutting edge of technological spectacle and an auteurist personal vision. Nolan himself has co-authored the screenplays for all three films (with his brother, Jonathan Nolan, as co-writer on the second and third), and on repeat viewings it becomes increasingly clear how closely the Batman films are linked to themes he's pursued throughout his career.

I had greatly mixed feelings about both "Batman Begins" and "The Dark Knight" on their original release, but even when I've felt frustrated with Nolan's arch gamesmanship or portentous philosophizing, I've also been aware that he belongs to a strange and precious Hollywood tradition: arrogant, autocratic, visionary filmmakers who strive to twist the most mainstream, mass-market kinds of movies to their own devious purposes. If Nolan is too often compared to Alfred Hitchcock, that's why, but you can identify other examples throughout the medium's history, from Erich von Stroheim to Brian De Palma to Paul Verhoeven to Zack Snyder. Whether or not you like Nolan's movies, I think you can argue that he has succeeded in doing this on a scale unmatched by anyone else.

I won't see or review "The Dark Knight Rises" (in all its 164-minute glory!) for several more days, and before I do I thought I'd take a fresh look at Nolan's first two Batman films, divorced from the uproar that surrounded their initial release. I was less looking to praise or nitpick than to figure out what sense I could make of the trilogy so far, and what kinds of themes and issues I might have missed the first time through. I'm going to pay absolutely no attention to avoiding spoilers, so if you haven't seen "Batman Begins" and/or "The Dark Knight" and want to protect your innocence, this really isn't the place for that.

I think the first thing to say is that these movies are highly impressive, and not just at the level of ambition -- it's also the degree of difficulty and the actual accomplishment. Yes, I admit it: I liked these bombastic, overly long Batman movies better the second time through! What I really mean, though, is that Nolan and his collaborators have done an admirable job of blending two distinct sets of Batman mythologies -- the original DC Comics character, as invented by Bob Kane, and the revisionist, proto-fascist Batman of Frank Miller's 1980s "The Dark Knight Returns" -- into a new work that feels both authentic and original.

It's my general proposition that Nolan is always playing a double game in these movies. He's trying to deliver a faithful and canonical Batman story, and he's pursuing his own agenda, which could be called subversive or allegorical, and which sometimes comes into conflict with the larger mission of mass entertainment. What I see in the Dark Knight trilogy so far is a critique of American ideology, and specifically the ideology of individual will and individual heroism -- the basis of American politics since the Puritans, and also of American cinema -- delivered by an outsider and in highly paradoxical fashion.

Of course a Batman movie cannot reject those things in the end; as messed-up and wounded as Christian Bale's playboy zillionaire Bruce Wayne may be, Batman is the very embodiment of individual autonomy and nobility and self-sacrifice. Bale is too stone-faced a performer, especially with the mask and the Batman growl in place, to let us be sure how much the caped crusader responds to the fascistic, clean-sweep nihilism of Liam Neeson's Ra's al Ghul or the anarchistic, death-wish nihilism of Heath Ledger's Joker. But the standard assurances of the comic-book universe -- that good will triumph over evil, and that some people are incorruptible -- are not necessarily beliefs that Nolan shares. (In fairness, the comic-book universe itself has grown to see those propositions as old-fashioned and highly conditional in recent decades.) As suggested in "Batman Begins," and made repeatedly and thuddingly clear in "The Dark Knight," Ra's and the Joker are Batman's doubles, Nietzschean supermen who long to impose their will on the universe just as he does. It's not that there's a thin line between him and them; from a philosophical perspective, there is no line at all, and the differences are semantic or aesthetic. Like the protagonists in Nolan's films from "Memento" onward, Batman is not known to himself, and is afraid of his true nature.

This is really an aside, but: Mr. Heath Ledger! In that movie! Jesus H. Christ! It was all hard to calibrate when "The Dark Knight" came out, a few months after his death, but that character takes over the movie in much the same way that Satan takes over "Paradise Lost," and possesses a similar level of depth and deception. What a second viewing made clear to me is that absolutely everything the Joker ever says is misleading or contradictory, including his heartfelt story about how he got his scars from an abusive dad (the story keeps changing) and his famous moment of introspection, while sitting in a hospital, dressed as a nurse, opposite Aaron Eckhart's Two-Face: "Do I look like a guy with a plan?" We can never be sure whether his calculated cackle reflects mental illness or, like, a commitment to performance. I'm tempted to say he's being honest when Batman comes roaring at him on the Bat-cycle, and the Joker stands stock-still in the street, murmuring, "I want you to do it. I want you to do it." But then, two things can simultaneously be true: 1) He actually wants to die; 2) It's a trap.

In all seriousness, about halfway through "The Dark Knight" I said to myself: Well, I sure hope they're bringing that guy back! The character's definitely not dead, but I haven't heard anything about ... oh.

This is an obvious thing to say, but Nolan departs from the more fantastical universe of Tim Burton's Batman movies in numerous ways, mostly by making Gotham more ... let's not say realistic, let's say plausible. This is a Middle American metropolis, sometimes but not always recognizable as Chicago, set in an alternate version of recent American history, one in which the crime and corruption and urban decay of the 1970s were never reversed. (One friend of mine quipped that "The Dark Knight" seems to takes place during the Walter Mondale administration.) I still maintain that there are numerous problems at the level of execution, ranging from Nolan's frequently incoherent fight scenes (he does much better with big action set-pieces, like the beautiful flipping tractor-trailer in "Dark Knight") to Tom Wilkinson's ludicrous portrayal of a Mafia boss in "Batman Begins."

Actually, the casting of Wilkinson, approximately the last guy in the world you would call when looking for an Italian-American criminal, raises a question for which I have no answer. How much can we assume that everything in these movies -- made, after all, by a Hitchcock-style obsessive control freak -- is the result of calculation rather than accident? I'm talking for instance, about the British-centric (or Commonwealth-centric) character of the films, which seems to underline the fact I mentioned above, that this is a critique of American ideology from an outside, love-hate perspective. Most of the actors, whether in principal roles or smaller ones, have been British, Irish or Australian (with a smattering of Europeans). The only white male American actor to play a significant part so far is Eckhart, as the Icarus-like crusading D.A. who steals Batman's girlfriend -- "Can I borrow Rachel from you?" he asks Bruce Wayne -- and then is turned evil by her death. He's the precise embodiment of a certain species of American hubris and arrogance.

Yes, the two actresses who have played Rachel, Katie Holmes and Maggie Gyllenhaal, are Americans. (As is Morgan Freeman, playing an iconic dispenser of gizmos and wisdom.) But even the switch from Holmes to Gyllenhaal suggests that Rachel, Batman's supposed love object, is literally a dispensable and interchangeable part. And the love scenes, such as they are, are shot in a stagey, old-fashioned manner that isolates them from the main action of the story and distances them from the viewer. I'm not going all the way to saying that this was a deliberate and considered decision, but the effect is the same even if it isn't, and in either case it results -- like the fact that the Joker is a more interesting character than Batman -- from the design of the whole enterprise.

As in "Memento" and "Inception" and other Nolan films, the girl -- I use that word advisedly -- is a receding vision, something lovely that is hoped-for but never to be achieved. His movies are always fundamentally "homosocial," meaning that they're about intimate relationships between men that are not sexual but take the place of romantic or sexual love. Ledger's Joker has no intention of killing "the Batman," whatever he may say to the contrary, although he's willing to die at his hands. Bruce Wayne's relationships with Michael Caine as Alfred and Freeman as Lucius are vastly more affectionate and substantial than his unconsummated, arm's-length romance with Rachel -- who dies anyway, because Batman saves the guy who took his girl, rather than the girl herself.

In "The Dark Knight Rises," Nolan faces the challenge of bringing this mélange of mythology and philosophy and cultural criticism to a head, while introducing several new major characters and finding a satisfactory conclusion (at least for now) to Batman's story. We get Tom Hardy, another British actor, as the supervillain Bane, threatening both Gotham and the borders of Batman's psyche with some new vision of chaos and disorder. We've got Anne Hathaway as Catwoman and Marion Cotillard as Miranda Tate, both perhaps signifying the allure of adult female sexuality, in place of the virginal, shape-shifting and now deceased Rachel. We all understand that even if Nolan has Bruce Wayne grow up, burn the costume and launch himself into a new life, like some combination of Huck Finn, John Wayne and Dirty Harry, that won't be enough to kill off the character for good. Inside, we all believe that we are Batman, the one decent night-spirit in an indecent world. Nolan's point may be that we're all wrong.