The Wirecutter says it's the Google Nexus 7 8GB 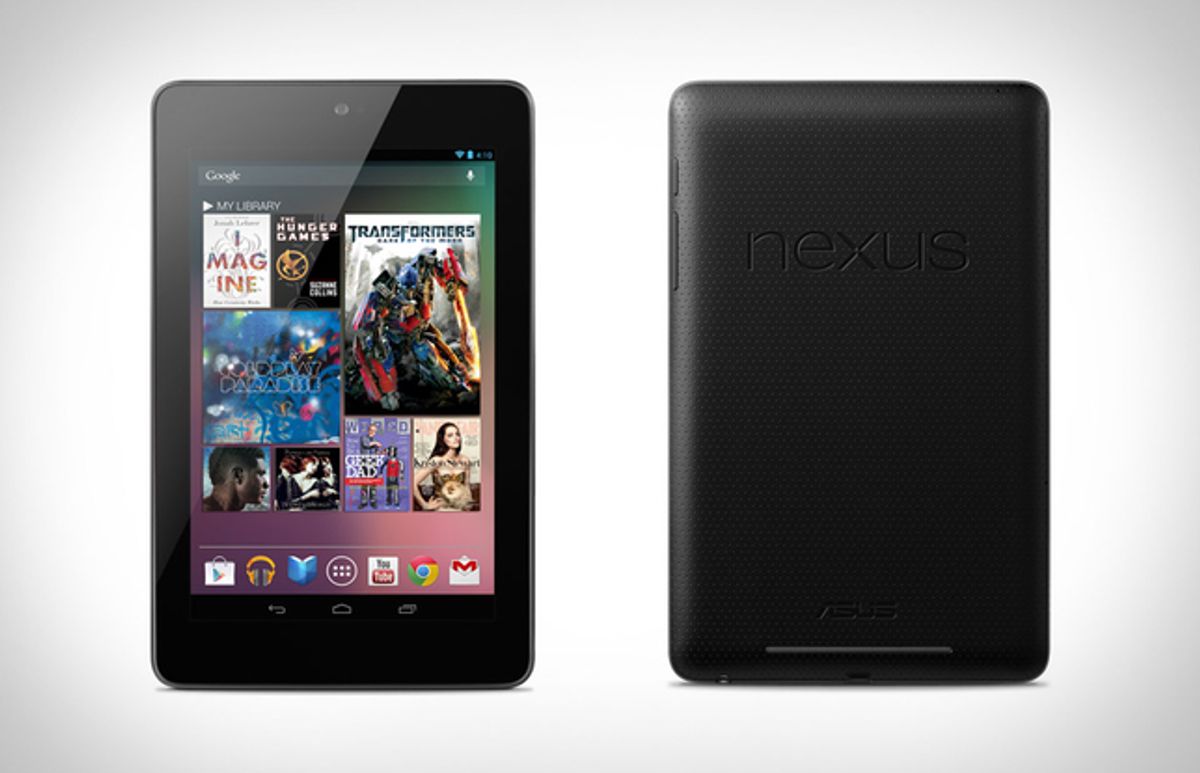 Google's Nexus 7 8GB is our new pick for best cheap tablet, pushing out our previous pick, the Kindle Fire. Yeah, yeah, of course, the $500 iPad is better. But at $200, the Nexus 7 is a great balance of performance and price for anyone not married to the Apple ecosystem.

Why would you get a cheap tablet? A lot of people think that tablets are not that useful, except for consuming media. And so a cheap tablet is an inexpensive way to get that done. This one makes even more sense if you're an Android phone user, and less sense if you're an iPhone or Mac guy. Again, if you can afford it and want a nice tablet, you only need to get an iPad. More on that later.

Let's talk about Android. Why is the Nexus 7 better than other Android tablets? A big part of Nexus' value is its speed. Up until recently, pricey, capable tablets like Asus' Transformer ($340) dominated the Android tablet market. Tablets like the Transformer are bigger, faster, and packed with more features than you need to watch an episode of The Office on a plane.  Cheaper options like Amazon's Kindle Fire ($200) are better for casual use, but they're slower at everything. The Nexus 7 offers the best of both worlds:  it's a tablet that's more advanced and powerful than the Transformer, but just as cheap, entertaining, and portable as the much slower Fire. At $200, it's a revolutionary steal.

Part of what makes the Nexus a great choice is Google's Play app store. It's not great, but for a $200 tablet designed for casual use, it's good enough. For a great content library you want iTunes. It's chock full of movies, music, magazine, books, and games.  But signing up for iTunes means you're paying the high sticker price for an iPad ($500). You don't need a retina display to watch The Walking Dead or play Angry Birds. The Nexus 7 is easily the better choice for casual multimedia time-killing. You might have to do a little hunting to find great content on the Nexus 7 (m0re on that later), but 600,000 apps in the Android Market and a mediocre movie, music, and magazine selection is enough to get by for this class of device, especially if you're willing to take the time to rip the music and movies you already own to use on it.

The Nexus 7 trumps Amazon's Kindle Fire for similar reasons. The Fire is fantastic for diehard fans of Amazon's movie, music, and e-book storefronts. The $80 you pour into Prime will add a lot of value to the Fire since subscribers get Amazon Instant's catalog of shows and movies to stream for free. If you don't fit into this niche then the bonuses evaporate, making the Nexus the better deal as it offers more apps via the Android Market, responds faster to finger presses, navigates smoother between applications, and offers Android's latest version of software (4.1, aka Jellybean) which makes it's more likely to receive future software updates and features. Most importantly, the Nexus 7 gives you all these practical advantages for the same price. And it can run the Kindle app, and other kinds of media programs, so the Amazon prie is the thicker, slower, heavier Kindle Fire's only advantage and it's not enough to make it the best cheap tablet anymore.

If all you're looking to do is rent new releases, surf the web, and play Zynga games on a whim, why not do it with the cheapest, most capable device?

The Nexus 7 is quicker on the draw than the dual-cored Fire thanks to double the RAM (1GB) and a brand new quad core processor. That means all-around faster access to your apps and files. The Fire has its uses though; Amazon's offers free cloud storage for content purchased from its huge media library, which is great for cutting corners around the device's 8GB (about 6GB usable) of storage. Even though this is more of a service than a spec, Amazon's cloud storage makes the Fire better suited for storing large media libraries than the Nexus 7's 8GB onboard memory and cloud storage of Google Play titles.

The Apple iPad with it's dual-core A5 processor outclasses the Nexus 7's processing power, but that shouldn't be too surprising since the iPad costs $300 more and is a flagship device. Apple's display is also better looking with higher pixel density (264 ppi versus the Nexus 7's 216) which means much richer visuals across the board and it's nearly 10 inches so magazines are easier to read on the iPad. This shouldn't be too surprising either: The iPad is a full-featured tablet designed for a variety of tasks whereas the Nexus 7 is primarily a multimedia playback device. The bottom line is that if you can afford an iPad you should get one because unlike Android vs Apple phones, which are in a contest with each other, Android tablets can't really keep up with the iPad.

PC Mag's Sascha Segan loves the Nexus 7's speed and responsiveness. He rated the Nexus 7 a 4.5/5 in his review and says its Nvidia processor is one of the fastest currently on the market. On top of being "far faster" than the Fire, Segan touts the Nexus 7's smoother screen transitions and lag-free typing. "It's versatile, well-built, fast, and a lot of fun to use," he says, which ultimately makes any 7-inch contender over $300 "pretty much irrelevant."

Nathan Olivarez-Giles at Wired.com agrees that the Nexus 7's performance and value give it a huge advantage. Olivarez-Giles gave it a 9/10 in his review and even says it " far out-classes" its 7-inch peers and many 10-inchers. "Google’s tablet responds as quickly and scrolls as smoothly as just about any tablet I’ve seen," he says, while also noting that it matched the iPad's performance during HD playback.

Olivarez-Giles is also a huge fan of the Nexus 7's display, crowning it best in class for 7-inch tablets. Otherwise, he ranked it just shy of Asus's Transformer Pad Infinity and the iPad. "It’s not quite Retina display quality," he says of the Nexus, "but with a pixel density of 216ppi, it’s very close."

For Gizmodo's Brent Rose the choice is easy. "At $200 there is pretty much no reason to buy a Kindle Fire at all," reads his 4-Star review. "You can argue that the iPad is a better tablet, but is it really $300 better?" Rose also notes that there's "virtually no jitter or lag anywhere in the OS" and attributes some of the smoothness to the Nexus 7's large stash of RAM.

David Pogue of The New York Times geeks out on the Nexus 7's flashier aspects in his review. He says the secrets behind the performance are the "supersmooth" 60fps transitions cranked out by the GPU and the tablet's ability to anticipate finger presses and pre-load animations. This makes the Nexus 7 "Applesque in its fluid touch response" for Pogue.

That said, he takes the time to knock the tablet back down a few pegs too. Pogue's beef with the Nexus 7? The lack of content in Google's Play Store:

"Amazon offers 650 digital magazines and newspapers; Google’s catalog is a third as big. No New Yorker, Time or The Economist. Google’s music store has nothing from Warner, and therefore no Green Day, Linkin Park, Regina Spektor, Led Zeppelin and so on. You can download Apple and Amazon songs as many times as you want; Google lets you download a song you’ve bought only twice. In its movie store, Google has nothing from Fox (“Ice Age,” “X-Men,” “Avatar,” and so on) or Summit (the “Twilight” movies). Its TV store lacks anything from CBS, Fox, WB, HBO, BBC, MTV/Nickelodeon, Showtime, Discovery Networks, A&E/History. So: no “Mad Men,” “Modern Family,” “Gossip Girl,” “Family Guy” and so on."

He's right about the Play store's missing content (especially about the missing Zeppelin). However, the Nexus 7 is a fully-baked Android device; even if Google's movie/TV/music storefront sucks there are still 600,000 Android apps. Like Netflix. And Amazon's Kindle app. Rdio, Spotify, Mog. And it's easy to get the device to play whatever media files you make or download on your own … see where I'm going with this?

It's not as streamlined as having a centralized store with a wealth of options. But the idea that you'll run out of things to watch or do on the Nexus 7 is a silly.

It has plenty of other shortcomings too. PC Mag's Segan liked the Samsung Galaxy Tab 2 ($250) better for storage of large media libraries, which makes sense given the small amount of available storage on the entry level Nexus 7 (about 5GB). Rose had a brief list of complaints including the Nexus 7's oddly-placed speaker (located on the bottom of the tablet) and the disabled micro USB-to-HDMI connectivity for big-screen playback. And pretty much everyone complained about Android's tablet app selection. Most of those aforementioned 600,000 Android apps are upscaled phone versions for now, which is a general Android tablet problem found in any cheap tablet at the moment. It's also WiFi-only, which puts a damper on full mobile access, and there's no Flash.

But remember: It's dirt cheap.

WHAT TO LOOK FORWARD TO:

Logic and rumor has it that Amazon is already hard at work on the Kindle Fire 2. Rumors point toward Nexus 7-like specs and a release date anywhere between the end of July and September. If you've already invested $80 in an Amazon Prime membership it's worth waiting to check out the Fire 2. Amazon's Instant Streaming service is a great value add for existing members and not available through the Nexus 7. On the Apple side there's fevered speculation about a 7-inch iPad Mini due out this year. If you're hankering for a cheap(er) iTunes tablet then it might be worth the wait.