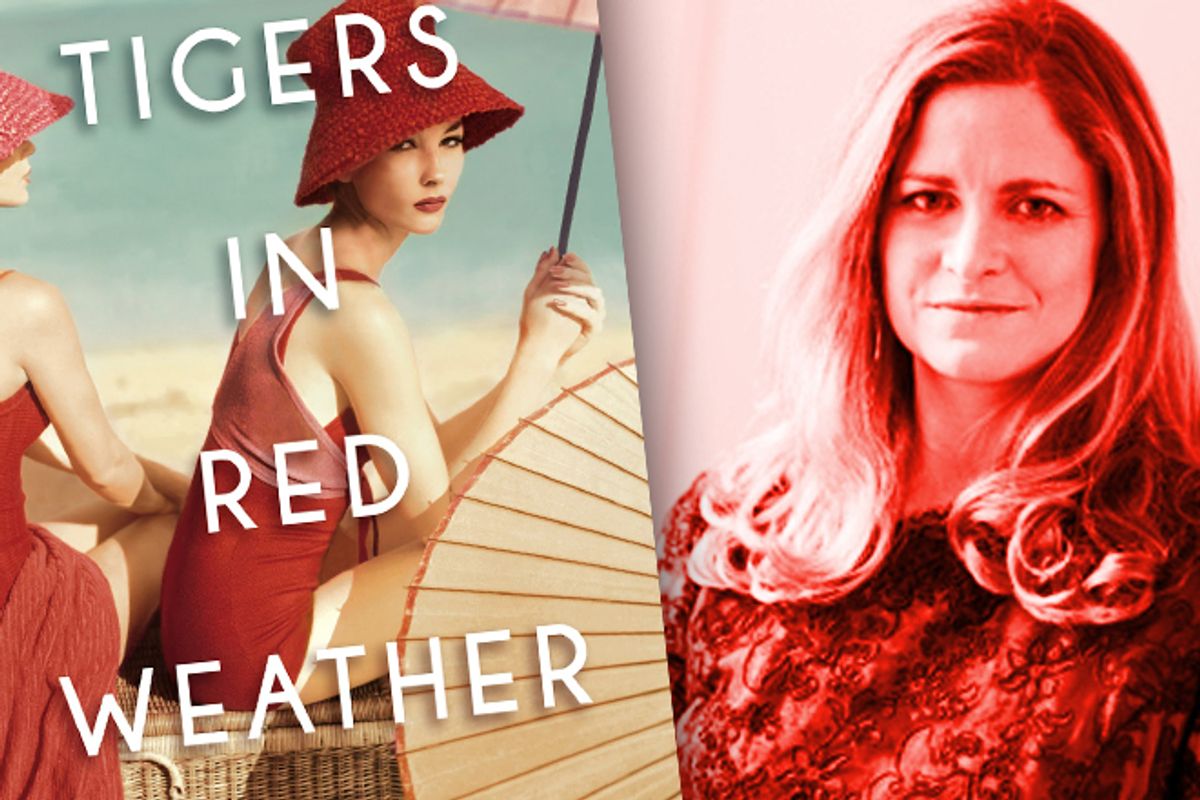 It's tricky, explaining the allure of Liza Klaussmann's "Tigers in Red Weather." To judge by the qualities easiest to convey in a review -- setting, characters, premise -- it might sound like a readily identifiable type of novel. The action takes place on a series of hot days between 1945 and 1969. The characters, each of whom gets a section told from his or her point of view, are members of an extended family that has summered in a big old house on Martha's Vineyard for generations. At the beginning of the book, they're listening to Count Basie and drinking gin and tonics. By the end, they're listening to the Doors and drinking gin and tonics. They sail. There's an intense, ambivalent sister-sister relationship (even though the two women, Nick and Helena, are actually cousins) and an intense, ambivalent mother-daughter relationship.

If this were the type of novel it sounds like, there'd be a fatal accident or an extramarital affair or a cancer diagnosis -- or maybe all three! Soapy but ultimately redemptive developments illustrating the saving grace of female friendship and familial love would ensue. The book's cover would feature a photo of bare feet in the sand. (And I, personally, would not be able to get past the third chapter without dozing off.)

Instead, in "Tigers in Red Weather," there's a murder. Two children in their early teens, Nick's daughter and Helena's son, discover the body of a young maid in a derelict shack. There is trouble in this paradise, but not the kind that can be easily wrapped up in a nice long heart-to-heart chat over tea. Furthermore, it started long before the boy and girl, Daisy and Ed, find that very nasty surprise. It began with two young women, each embarking on marriage in the halcyon days at the end of World War II.

"Tigers in Red Weather" has the irresistible, opiate undertow of a fine Southern gothic novel; it's best read in long, languid, effortless pulls. For that reason, while it's not a sunny book -- not with the reckless dissonance that thrums through it from beginning to end -- it's still a summer book. It's written with the stripped-down grace of early modernist realism, and its literary aspirations are worn in its title, taken from a Wallace Stevens poem about the uncommon flaring of imagination in a conventional world. Yet it also weaves a powerful storytelling spell.

Nick, a spoiled, restless beauty, likes to think of herself as one of those imaginative flares. Of her marriage with golden boy Hughes Derringer she thinks, "They were supposed to be different, different from all the people who didn't want things and didn't do things and who weren't special. They were supposed to be the kind of people who said to hell with it, who threw their wine glasses into the fireplace, who jumped off cliffs." But when her husband returns from the war, he seems to have lost this Fitzgeraldian thread (if he ever had it in the first place). Hughes has become just about the only man in American immune to his wife's charms.

Meanwhile, Helena has married a hard-up insurance salesman with dubious Hollywood connections and an obsession with a dead actress. Nick's efforts to rescue her beloved cousin from this man are among the few unselfish acts she troubles herself with. Helena, however, doesn't quite see it that way. Then there's Helena's son, Ed. Does anyone besides Hughes recognize that this kid is "off. Definitely off"? Ed's one redeeming trait is his peculiar devotion to Nick and Hughes' daughter, Daisy, who's infatuated with a local boy who, in turn, has a big crush on Nick. It's a mess, even before the corpse turns up.

One of the pleasures of "Tigers in Red Weather" is the way each POV section takes an event we've already witnessed through another character's eyes and rotates it a quarter turn, exposing a very different interpretation. This is an extremely difficult effect to pull off; a story can lose momentum when it seems to be covering old ground. Yet Klaussman succeeds at making the reader feel that what happens is less important than how each character understands it. The path we follow is not a string of chronological events, but a twisting maze leading to each individual's heart of darkness.

"She was an interesting person," Ed muses, creepily, when his section of the novel comes around, "but she had cracks. And it was the cracks I was drawn to because they were the inside peeking out, a glimpse of what was hiding below the surface." It's an unsettling novel that makes you feel complicit with such a character, but that's just what "Tigers in Red Weather" ends up doing. The reader, too, wants nothing so much as the next glimpse of that hidden world beneath the cracks.