The Minnesota representative offers "evidence" of Islamic infiltration of the U.S. government in a 16-page letter 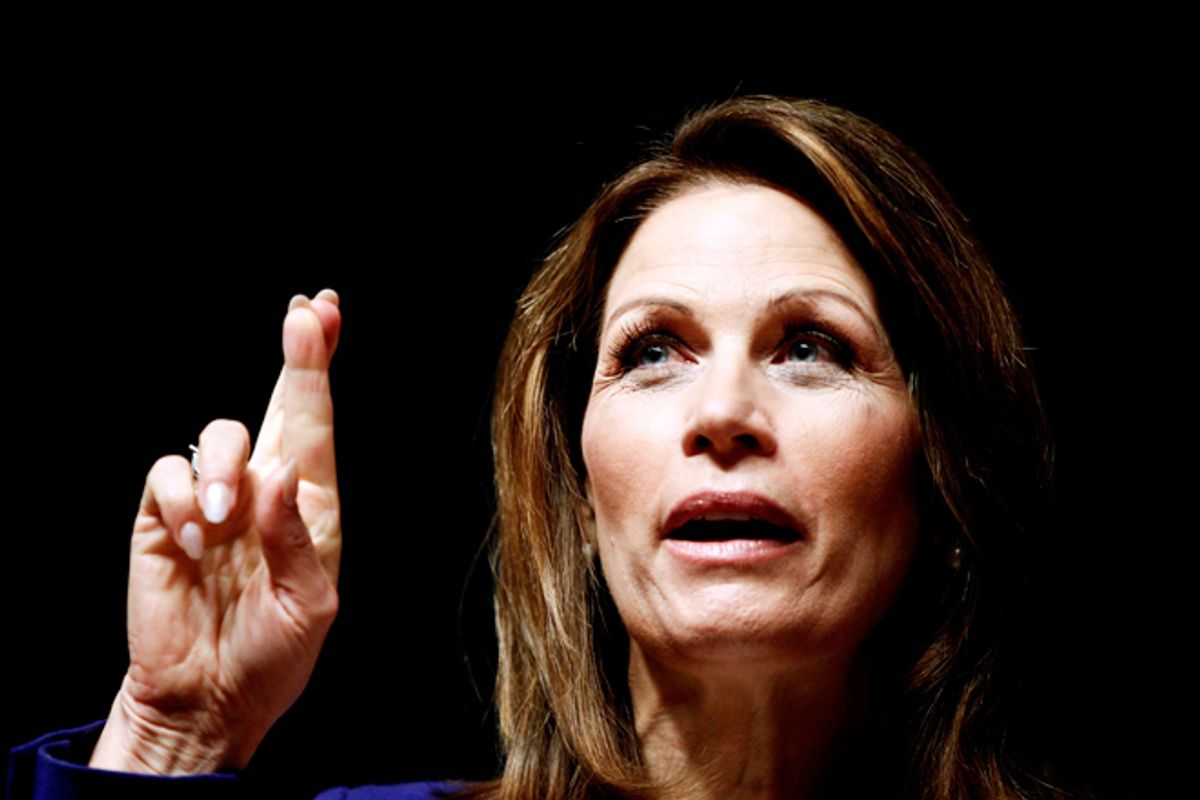 Rep. Michele Bachmann defended her attempt to root out “deep penetration” by the Muslim Brotherhood into the U.S. government Friday, writing a 16-page letter explaining and expanding on her initial charges against Huma Abedin and others of being terrorist sympathizers. Bachmann’s letter came in response to a challenge from a fellow Minnesota lawmaker, Rep. Keith Ellison, a Democrat who was the first Muslim elected to Congress. Ellison last week asked Bachmann for evidence to support a series of letters the Republican sent to five national security agencies demanding investigations into alleged Muslim Brotherhood infiltration in their ranks.

In the new letter, Bachmann questions why Abedin, a top aide to Secretary of State Hillary Clinton and the wife of former Rep. Anthony Weiner, was able to receive a security clearance despite having family members that Bachmann believes are connected to the Brotherhood. “I am particularly interested in exactly how, given what we know from the international media about Ms. Abedin’s documented family connections with the extremist Muslim Brotherhood, she was able to avoid being disqualified for a security clearance,” the congresswoman wrote.

As evidence, she pointed to Abedin’s late father, Professor Syed Z. Abedin, and a 2002 Brigham Young University Law Review article about his work. Bachmann points to a passage saying Abedin founded an organization that received the “quiet but active support” of the the former director of the Muslim World League, an international NGO that was tied to the Muslim Brotherhood in Europe in the 1970s through 1990s. So, to connect Abedin to the Muslim Brotherhood, you have to go through her dead father, to the organization he founded, to a man who allegedly supported it, to the organization that man used to lead, to Europe in the 1970s and 1990s, and finally to the Brotherhood.

The next paragraph of the law review article she cites quotes Syed Abedin concluding that the Koran calls for, “multiple ways of life ... i.e. religious and cultural plurality among mankind.” Pretty scary Islamo-fascist stuff. It’s also worth nothing that Weiner, Huma Abedin's husband, is one of the most unquestionably pro-Israeli politicians in America. But Bachmann would have us believe that the security clearance process somehow missed Abedin’s nefarious connections, and thus she knows more than, say, the CIA and FBI, who are involved in the background-check process.

As for her sources, Bachmann curiously doesn’t mention Frank Gaffney in this new letter, whom she cited favorably by name in the first few paragraphs of each of her first round of letters to the inspectors general of the national security agencies. Ellison's response specifically called into question Gaffney’s expertise, noting, “Mr. Gaffney’s views have been widely discredited, including by the Federal Bureau of Investigation and conservative organizations.” But Bachmann ignores him in her response. This is especially curious considering that Gaffney was an informal foreign policy advisor to Bachmman’s presidential bid. “We’ve spent hours, over several days with her. I think she’s got the bulk of what we would tell her in one of the more formal presentations,” Gaffney told journalist Eli Lake last year.

In the new letter, however, we do get a favorable citation of Steven Emerson and his Investigative Project on Terrorism, another activist in “the Anti-Muslim inner circle,” as the Southern Poverty Law Center put it. Part of the cottage industry of Islamo-phobia on the fringe-right, Emerson has engaged in the same kind of conspiratorial attacks on Muslims and opaque funding practices as Gaffney.

Even George W. Bush gets implicated for appointing a special envoy to the Organization of Islamic Cooperation, which is “determined to impose shariah [Islamic law] worldwide” and undermine the U.S. Constitution, according to Bachmann’s letter. She notes that President Obama also appointed an envoy to the organization.

But perhaps the biggest concern with her letters is the fact that we know about them at all. If Bachmann were genuinely concerned about terrorist infiltration in the U.S. government, one might assume that she would keep her requests for investigations secret so as not to tip off the potential infiltrators. Instead, she sent her letters to the media and then went on conservative radio host Sandy Rios’ show to talk about it. In her response letter, she hints that she has access to secret information as a member of the House Select Committee on Intelligence supporting her claims but can’t make it public. If she had kept her initial requests for investigations confidential, she could have shared that secret information with the inspectors general from whom she is requesting an investigation. Bachmann is nothing if not adept at grabbing headlines, and one might easily conclude this is little more than a ploy to remain relevant in the summer doldrums after a failed presidential bid.