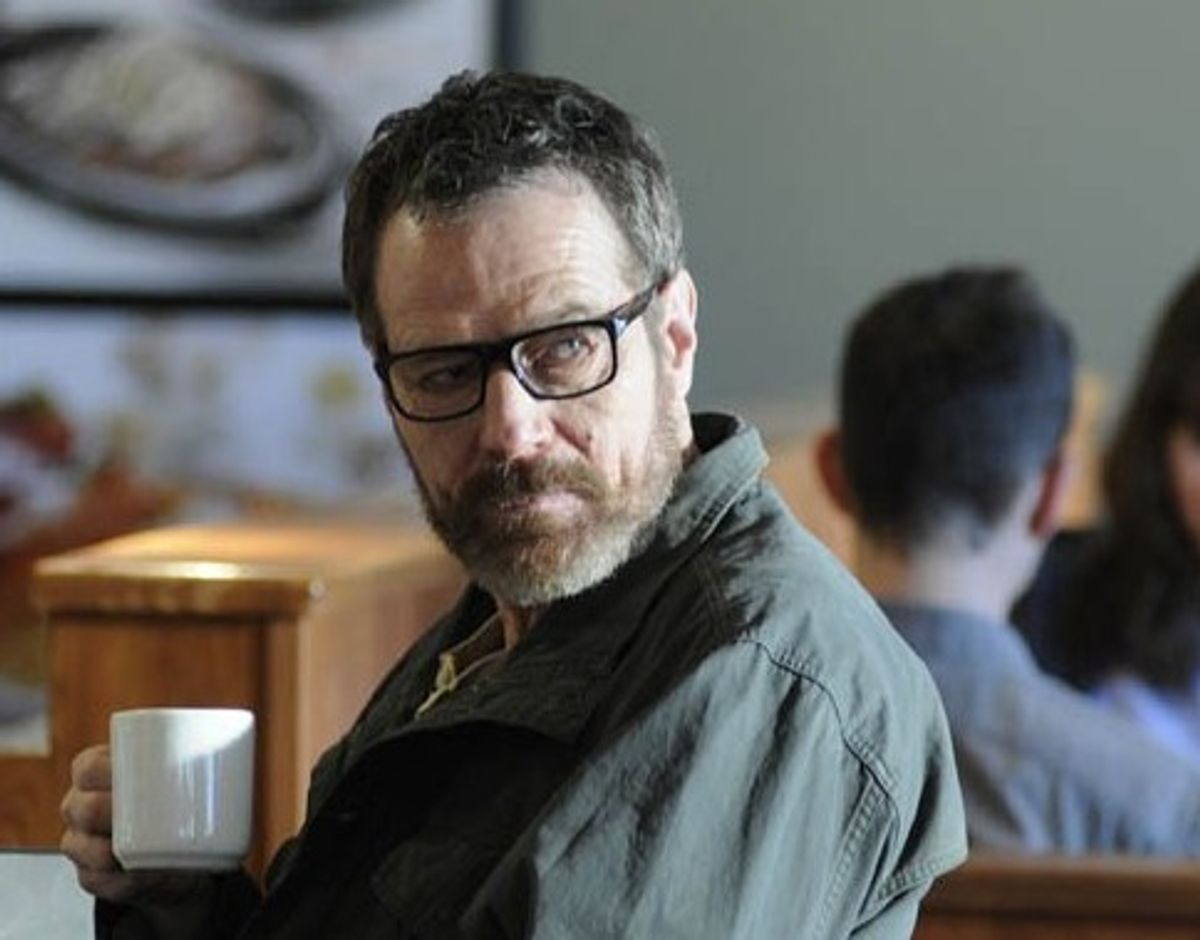 The late Paul Nelson once wrote of Bob Dylan, at the height of both of their creative powers, “Hungry for a sign, the world used to follow him around, just waiting for him to drop a cigarette butt. When he did they'd sift through the remains, looking for significance. The scary part is they'd find it – and it really would be significant."

This quote comes to mind as I settle in to serve as genial ringmaster of our weekly "Breaking Bad" conversation. Few works of art have ever been so rewarding of viewer involvement. Over the past four seasons and 46 episodes, Vince Gilligan and his colleagues behind and in front of the screen have created one of the greatest serial dramas ever conceived in any form. Like Walter White’s product, "Breaking Bad" is pure, powerful and wildly addictive.

Before we begin, I’d like to briefly talk about this postmortem episode recap thing. If you think about it, we’ve seen the evolution and flowering of two amazing forms of communication: First, and obviously more important, the creator-driven novel for television, and second, the online mechanism for the analysis and instant feedback of the viewing audience. Recently, “The Wire’s” David Simon railed against this mechanism and us Monday morning quarterbacks. “It doesn’t matter whether they love it or they hate it,” Simon says. “It doesn’t mean anything until there’s a beginning, middle and an end. If you want television to be a serious storytelling medium, you’re up against a lot of human dynamic that is arrayed against you.”  I beg to disagree. We’re here for you, Creative Geniuses of the Small Screen. A dense, multilayered creation like "Breaking Bad" seems to be the perfect habitat for an audience that sweats and then rewards every detail, and I would be very surprised if the sequestered castaways on (Vince) Gilligan’s Island would have it any other way.

So, let the games begin. Forty-six episodes down, 16 to go.

As "Breaking Bad" season premieres go, “Live Free or Die” gets off to a slow start. More an overture, not yet a movement, we’re really just picking up where we left off, getting reacquainted with our TV pals. There isn’t a lot of story here, just a table being carefully set -- and our obligatory series opener flash-forward. The high bar of enigmatic first scenes has been adjusted and reset in every previous season of "Breaking Bad." Spectral waterlogged teddy bears, homemade narcocorrido videos, slithering hit men, and now ... a Denny’s plate of bacon and eggs? What do we know from sifting through that bacon? Walter, now going by the name of Lambert, seems to have spent some hard time on the run in New Hampshire and has traded up in illegal firearms from the last time he met up with the philosophical gun dealer played by Jim “Ellsworth” Beaver. Walter clearly does not look well, and although his hair is back, it looks like he’s back on his cancer meds. And oh yeah, either he, his fake ID, or both, have just turned 52. Hard to imagine this saga began on Walter’s 50th birthday. In any event, he seems shattered, resigned to his fate -- and that fate seems to be a grim one, involving a very large gun and lots of tracer bullets.

Now, there are real years, dog years, and "Breaking Bad" years, and by rough calculation, only a year or so has gone by since Walter got his diagnosis. How time does fly. If his fake ID checks out, this would place this flash-forward at least a year from where we left off last season. My head hurts. A lot of bacon – and ashes -- to scrutinize, and we’re just three minutes in.

What themes does this minor-key overture seem to be setting up? Well, as Walter White once tried to impart to a bored class, “It is growth, and decay, and transformation.” A quote from Vince Gilligan comes to mind. “There’s an old saying about Hollywood, that it doesn’t change you — success in Hollywood doesn’t change you; it just magnifies those flaws that you already possess and may have kept hidden." As this quote pertains to Walter, it’s clear that he is now about to endure one of the most crippling side effects of fame. And that is, believing in your own press. “Because I say so," says Walter to Mike, omnisciently, after coming close to blowing everything in the Great Magnet Caper. Meanwhile, Mike and Jesse exchange meaningful "ruh-roh" looks, which I do believe we will be seeing more of.  After Walter’s harrowing four years as a student in Applied Evil, he’s convinced himself that he’s taken his final exam (he won, remember?) and has now awarded himself a degree with the highest honors. And if there’s anything that both Walter Classic and the New Walter share, it’s how to succeed in academia. Tenure might be a different proposition. “You scare me,” says Skyler, in an rather on-the-nose answer to Walter’s query, and yes, he does. Heisenberg and Walter are now as one.

The stakes are high for both Walter White and his creators. Where do they go from here? In many ways, Vince Gilligan and his creative team share a predicament with their fictional construct, and both run the risk of believing in their own press. They’ve managed to bring a new kind of vibrant life to a once-conservative structure, defying the odds and staying one step ahead of the grim fate that almost always awaits desperate gamblers who make up their own rules as they go along. Chris Carter flamed out when “X-Files" dissolved into the acidic mulch of its own mythology; “Deadwood” was the shocking victim of a drive-by cancellation; “Lost” and “The Sopranos” left many devotees seething in frustration, without any face-removing – or face-saving -- “bang.”

* Welcome back, Mike, Lord of the Chickens! “Be nice,” he instructs patiently, "be nice.” If only.

* Walter toasting his reflection in his dark bedroom, just before he realizes what so many commentators from last season had already figured out. Gus monitored everything from the back room, and the existence of those recordings put everyone at risk. But how much would Gus have needed to actually record? Wouldn’t the all-knowing Gus have anticipated just such a risk, especially when he knew that Hank was coming after him?  But let us not pick at nits. For now.

* Glad to see the Blind Faith of anti-heroes Walter, Jesse and Mike, finally jamming together, although in a rather perfunctory fashion. Who knew that Mike wasn’t faking it and really had developed an affection for Jesse during their romantic delivery runs in the desert? This bromance is far from over.

* Wasn’t it just a little too easy to get into that Police Gated Community with the Death Magnets? Fortunately for our rockin’ trio, none of the cops had any of the easily magnetized appendages that Larry Hankin had warned them about. A rare case of "BB" setting up something, and then not really paying it off.

* Credit Suisse in the Cayman Islands seems to be Gustavo Fring’s piggy bank of choice. Maybe he and Mitt Romney share the same personal banker? I think we’ll be meeting some Germans with a personal stake in that bank account, and soon. That whole “Gus has heavy friends in Chile” connection is too good to be just a red herring. Maybe the love child of Josef Mengele and Eartha Kitt? Hmmm. And, while we’re on the subject, just who is in that framed picture with Gus? Not like "Breaking Bad" to show something, and not pay it off, later. Or did I miss something and this is no stranger?

* Hank exploring the spectral Tomb of the Unknown Henchmen. Who knew that teeth explode like popcorn if the temperature is just right? The things we learn on TV. Maybe one of those teeth will be added to Hanks' apparently abandoned mineral collection.

* Poor Ted. Just. Poor Ted. Ever notice how much time "Breaking Bad" spends in hospitals? Walter, Hank, and now Ted, who looks like he will be there awhile. I feel like I now know the joint as well as Mike seemed to when he pulled the plug on the last remaining Cousin.

* Saul’s back. Really? I thought for certain his avaricious receptionist was going to be taking over the family business. Glad to see that door is fixed.

* Enough already with the ricin cigarette, Huell’s stealth Jesse-frisking (score another one for observant commentators!) and the Lilies of the Valley. We get it. There wasn’t an easier way than a stealth poisoning of a kid to convince Jesse that Gus was a bad guy? Or was this just another excuse to take advantage of that budget hospital location?

But, whatever. The overture is over, the curtain is about to rise. We’re in for a bumpy ride. By assuming that the audience is as smart as its creators, "Breaking Bad" has, over its last four seasons, filled a Lake Mead-sized reservoir of good will -- something that seems so easy yet so far beyond the reach of so much that passes for popular entertainment. However tentative “Live Free or Die” (I’ll bet on the “die” part) was, it just marks the slow ascent to the top of the coaster, before the first big plunge.

One is left in “Live Free or Die” with that image of Walter toasting himself in the mirror, in front of a now-silent crib. Something inside him has been slouching to be born over the last four seasons. The gyre has widened between Walter and everything that that he once held precious. As Winston Churchill so memorably said, when confronting another form of theatrically over-the-top evil; “Now, this is not the end. It is not even the beginning of the end. But it is, perhaps, the end of the beginning.”

Speaking of which, scenes I’d like to see this season, with old friends I would like to meet again, complete with loose ends I’d like to tie up. New Walter has another, er, lunch, with Gretchen Schwartz, the Bentley-driving “Grey Matter” entrepreneur. Talk about class war. Walter and Donald Margolis, the haunted air traffic controller, hoist another beer, and talk some Milton. At least his daughter Jane has moved on to a better place, Apartment 23. And what ever happened to that sweet little old lady who got her wheelchair-friendly wheels boosted by the slithering Cousins? Inquiring minds want to know!

And it goes without saying, more Badger, please.