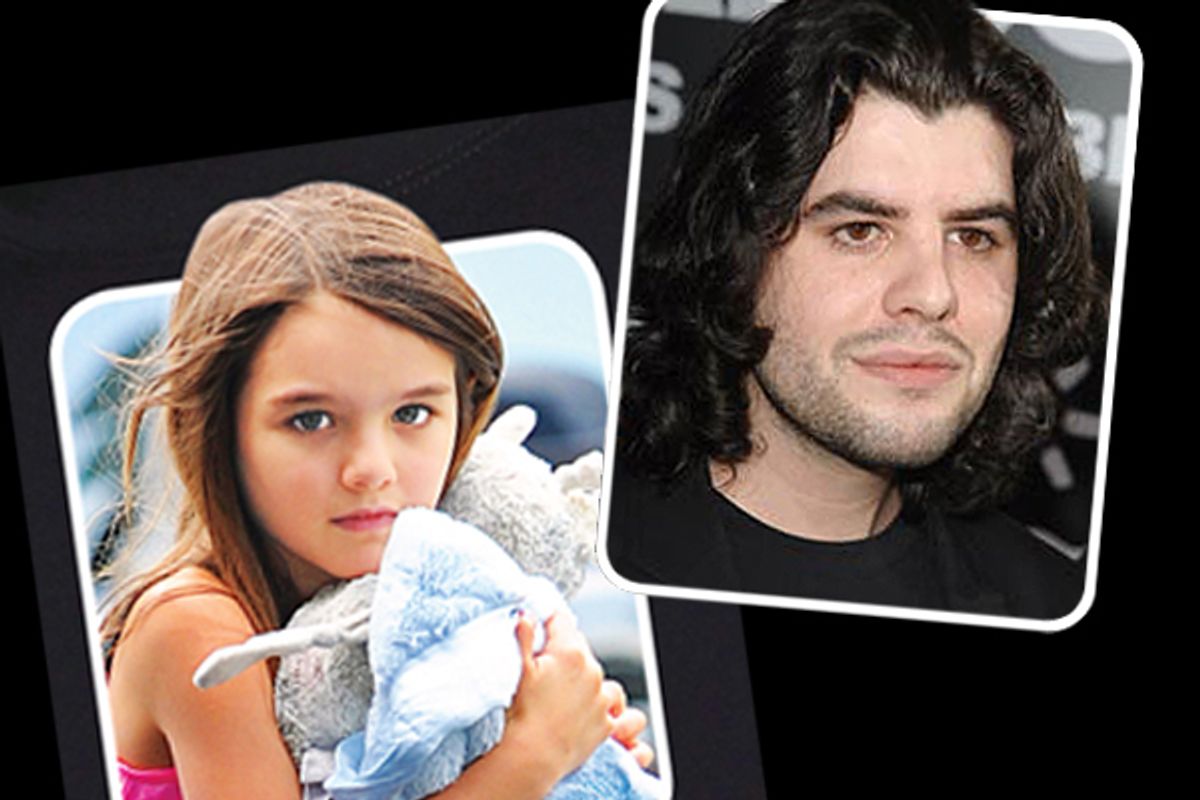 Come on, you'd cry too if you were Suri Cruise.

On Monday, young Miss Cruise, the pacifier-brandishing, high-heel-wearing 6-year-old product of Tom Cruise and Katie Holmes' loins literally made front-page news for a public display of weeping. There, on the cover of the New York Daily News, was a picture of little Cruise in full-blown wailing mode -- a photograph shot, by the way, while she was in the back seat of a car with her mother. Suri's source of "heartbreak"? An equally well-documented, paparazzi-chronicled trip to a local pet store, setting off speculation that the poor girl just wants a puppy. This is an incident that was also reported by ABC News -- as a "mommy-I-hate-you tantrum … over a puppy." Oh, Suri is also apparently now enrolled in an all-girl Catholic school, in case you missed that.

But Suri Cruise is, of course, not the only big story of the day. Over the weekend, the news broke that Sylvester Stallone's 36-year-old son, Sage, was found dead in his Los Angeles apartment. There may be been prescription bottles at the scene! Nobody found a suicide note! He might have been engaged! He was posting on Facebook just a few hours before he died! And you know the worst, most tragic thing in all of it? The toxicology report is "still pending." Hellooooo, L.A. coroner's office? People have deadlines here.

It's a given that in our relentless, round-the-clock, need a new headline every five minutes news cycle, we've have managed to wring out every nip slip, every baby bump, every unflattering moment of open-mouthed chewing, and every vague, unconfirmed, overheard-at-a-restaurant tidbit of celebrity life into a full-blown piece of breaking news. I promise you that somewhere right now, someone with a very expensive camera is sitting patiently in the shadows, waiting for Melissa Joan Hart to scratch at a booger. In about 15 minutes, that image will be burning up on Us.com. The invasive, anything goes, hey-you-asked-for-this-when-you-got-famous culture that fuels the alarming number of tabloids clogging up the supermarket checkout line -- and the even more daunting number of websites devoted to wondering exactly what is going on in Jennifer Aniston's womb and when Beyoncé is going to drop all that pregnancy weight and whether Justin is cheating on Jessica and Kris is cheating on Bruce and whether that reality star got a boob job -- are exhaustingly gross enough. But what do we make of the fact that the current top two stories on the New York Daily News, New York Post, People and several other sites belong not to celebrities themselves but their ostensibly unhappy children? How far into the lives of public figures are we going to go now? All the way to the puppy store? All the way to the grave?

The celebrity child has never been a creature who could grow up entirely out of the limelight. Generations ago, movie fans watched Joan Crawford create  elaborate tableaux of a happy domestic unit – and then, decades later, just as eagerly lapped up her grown daughter's exposure of its dark underside. Yet the mad, pathetic scramble to expose the tragedy of movie star families keeps sinking to new depths. Suri Cruise's gymnastics classes and ice cream cones and basically any moment outside of her extravagant domiciles are now news fodder. Reminder: She is 6. And if the kid has a meltdown, jackpot! What a glorious opportunity to ruminate on the source of her misery, and her no doubt incredibly spoiled disposition! And it is here that I would like everyone who has ever spent any time whatsoever in the company of a 6-year-old to join me in attesting that they cry about every five minutes. They run around and they pout and they sulk -- and if there are other kids around, someone is getting shoved. It's just that, fortunately, most children and their parents have the luxury of having their daily crap hit the fan without an action news team waiting outside.

Likewise, most family losses unfold in the same way. That the son of a big movie star died is an event that would, on Planet Normal, still be noted. It's the insane, whipped-up, desperate display of clawing around to break the news of every awful circumstance surrounding Sage Stallone's death that's ghoulish and sick. And you do know what happens when a zillion sources are tripping over themselves to get the message out there as speedily as possible? They get the message wrong. Whatever, right? A half-assed, heavily clicked-on story is still a traffic driver. Who cares if it's entirely about someone whose newsworthiness is his or her last name? Or that the message is just some messed-up exercise in declaring to the world that money and fame can't buy you a happy life? I think we've all figured out they can't buy you a private one, that's for damn sure.

Yet neither 6-year-old Suri nor 36-year-old Sage ever entered into an agreement with the public that the intimate details of their lives were going to be forever up for grabs because of their parents. That's why the statement of Sylvester Stallone to gossip hub of the universe TMZ rings so sincere and painful. On Monday the actor pleaded for an end to "the speculation and questionable reporting," saying he's "imploring people to respect my talented son's memory and feel compassion for his loving mother, Sasha."

"Compassion" isn't a word generally associated with gossip, or contemporary culture in general, come to think of it. It means to share in the suffering of others -- rather than wallow in it. It means to put yourself in somebody else's shoes instead of snarking on them. To respect the parent-and-child relationship, whether that child is a kindergartner pitching a fit or a grown man whose father now has to grieve him. It means to give people their dignity. Including people whose greatest claim to fame is simply being someone's daughter or son.