Madison Square goofiness: How to bungle the business case for a global point guard sensation 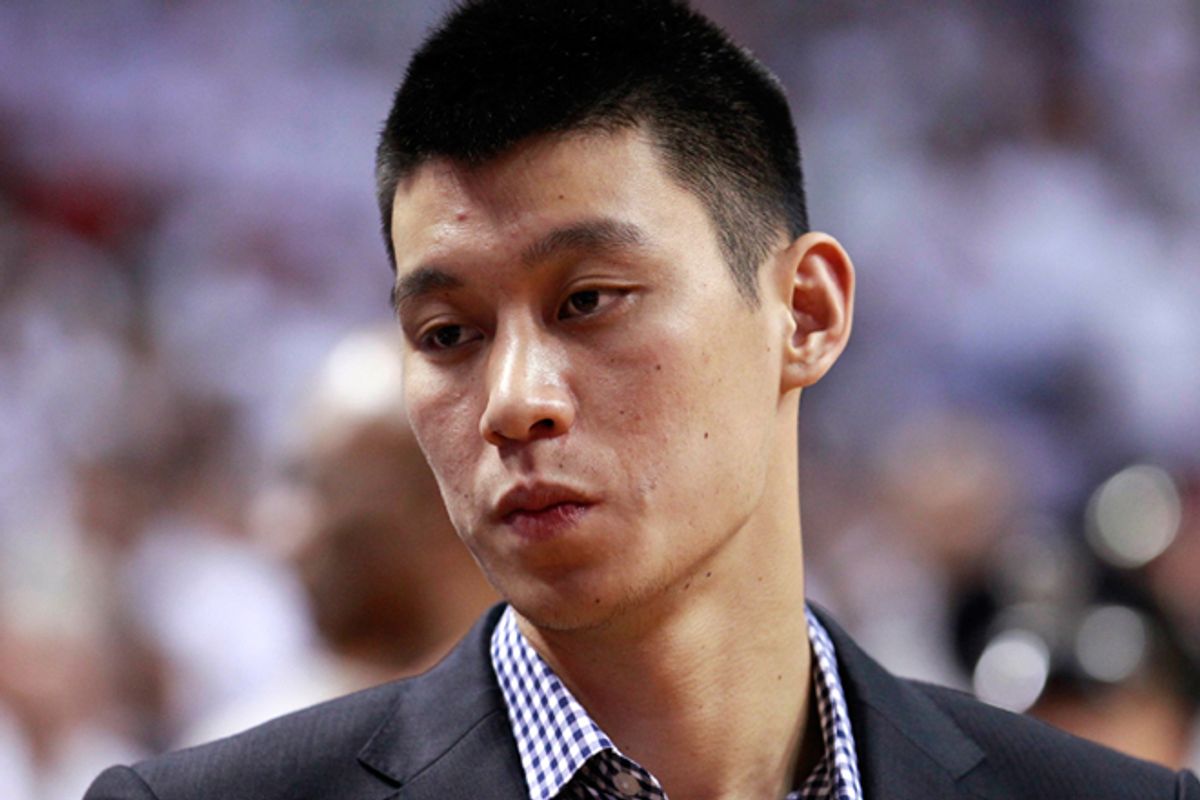 How could it have come to this? New York doesn't deserve Jeremy Lin.

A disclaimer: After a couple of weeks of Linsanity earlier this year, I pulled out my credit card and sprang for DirecTV League Pass access to every single NBA game, just so I could revel in every last second of Jeremy Lin's astonishing run as the point guard for the New York Knicks.

This was unprecedented economic behavior on my part, but I don't regret the decision for one second, even if Lin's ensuing knee injury and absence from the playoffs ended his fabulous run with a distressing whimper. Lin played a creative, hustling style of basketball that serious fans adored. He was unselfish in the sense that his ultimate goal was to make everyone around him better, but also selfish enough to be unafraid to take the big shot in the clutch. And he delivered. His explosion may have provoked a frenzy of identity politics, but at the same time it transcended color and race. True basketball fans loved Lin's game, end of story.

All this might help explain why I, along with untold bazillions of basketball fans around the world, am flabbergasted at the possibility that the New York Knicks might not sign Lin to be their point guard of the future. Under the convoluted terms of his current NBA player status, Lin had the right this year to entertain contract offers from other teams, but the Knicks had the corresponding right to match any such offer and keep him. Lin ended up getting a deal from Houston that may well reward him more than he's technically worth -- on strictly basketball terms -- but until very recently, all the scuttlebutt from New York suggested that the Knicks were ready to match any offer.

And for good reason! In pure dollars-and-cents terms, Lin transcends mere basketball. Who cares how many assists per game he gets -- if you count the global Chinese population (and you should), his fans literally number in the billions. That's a lot of jersey sales and a serious spike in the TV ratings. His early spring run as a Knick raised the market capitalization of the Knicks' parent company, the Madison Square Garden company, by around $70 million. The rumors that the Knicks might not sign him have resulted in a $50 million drop! Consider this: the Houston Rocket offer is worth $25.1 million over three years -- that's just half the loss in value MSG has suffered since the news broke that the Knicks are giving Lin the cold shoulder.

I pity the long-suffering Knicks fan. I'm with them -- I'd love to see him, in a Knicks uniform, continue to out-duel Kobe Bryant, stick 3-pointers over Dirk Nowitzki, throw alley-oop passes the length of the court to Amar'e Stoudemire. The New York media machine plus the Asian-American superstar is a match made in hype heaven. I know that that there's no guarantee Lin will repeat his exploits -- his knee might turn out to be a long-term problem, the league might figure out his game, by next May he could be a reserve coming off the bench -- but the essence of fandom imbues every future with hope. Letting Lin go is a sucker punch to the fans that roared for Lin.

But here's the thing: The more I learn about the dysfunctional management of the Knicks, the more I think that Lin may end up being better off in Houston. A franchise stupid enough to throw away the chance to cash in on Lin's potential as a global brand is a franchise stupid enough to surround him with the wrong players and wrong coach. There's no player in the NBA more selfish than Carmelo Anthony, and no sign that the Knicks current coach, Mike Woodson, believes in the creative, share-the-ball style of play in which Lin best shines. In New York, Lin would be set up to fail. In Houston, he'd be encouraged to blossom.

So I'm not going to sign the petition to keep Lin in New York. Knicks fans deserve Lin, but MSG owner James Dolan doesn't. Basketball karma will be harsh: Next year New York will see another dysfunctional team stumble its way toward an early-round playoff exit while playing selfish, ugly ball. Meanwhile, the eyes of the basketball world will suddenly turn to Houston, as everyone who loves underdogs, sweet outlet passes and improbable glory suddenly becomes a Rockets fan.