The anti-tax king goes postal on a conservative Republican senator 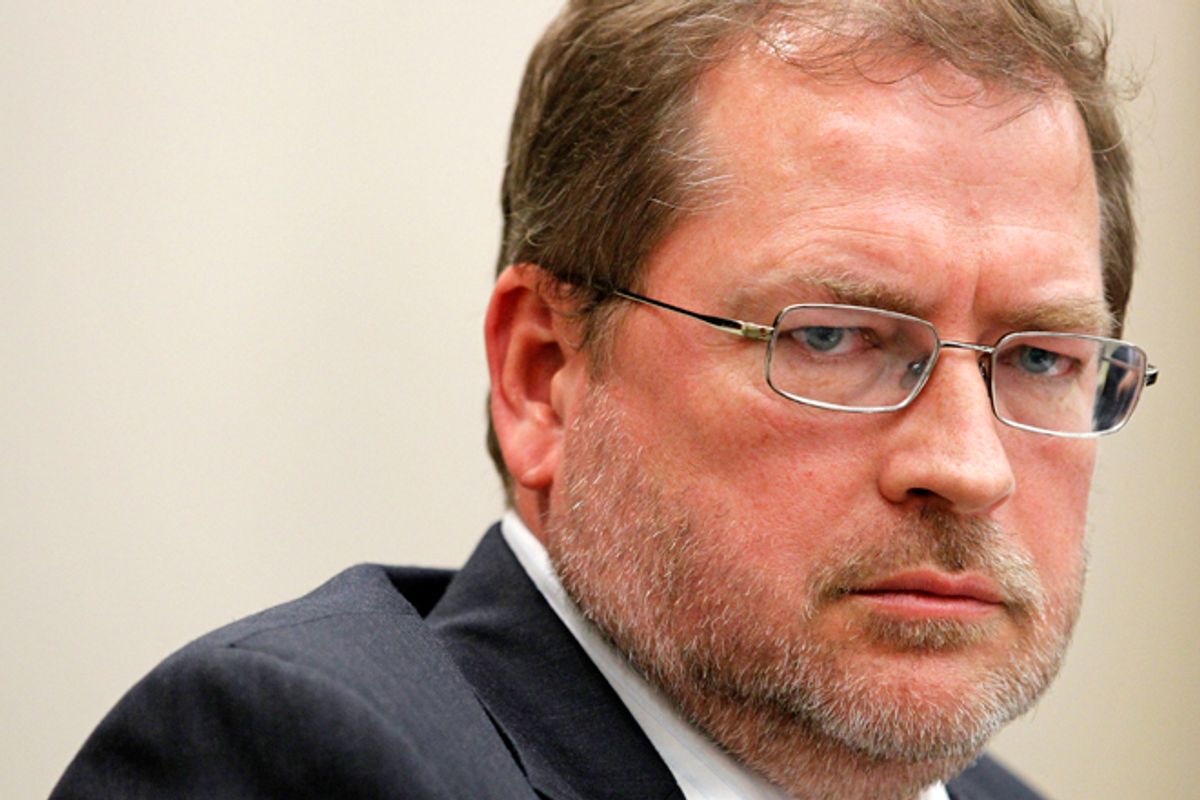 Has Grover Norquist gone too far? The uncompromising starve-the-beast activist -- before whom (nearly) all Republicans bend a cowering knee, for fear of violating his anti-tax-hike pledge -- has always had a way with the over-the-top sound bite. On Monday, he reaffirmed his penchant for lethal toxicity and may have finally stepped over the line, when he called a conservative Republican senator a liar who appears to have developed Stockholm syndrome.

The senator in question is Oklahoma's Tom Coburn, and there's some history here. Coburn and Norquist have been tussling with each other for years, providing much delight to liberal spectators who are probably hoping that neither party is left standing after a 12-round heavyweight fight. Their most recent disagreement centered on Norquist's contention that abolishing a tax break for ethanol constituted a tax hike that must be matched by other cuts. Coburn, who introduced the amendment to get rid of the tax break, argued that Norquist's position was ridiculous: Getting rid of tax loopholes negotiated by special interests should not be considered the equivalent of tax hikes.

In a Monday op-ed in the New York Times, "A Greater American Pledge," Coburn upped the ante. Not only did he reiterate his scorn for Norquist's position on matching every tax loophole eradication with another tax cut, but he also took matters a serious step further, declaring that Republicans were willing to cut a "grand bargain" with Democrats that included revenue increases.

Crazy talk! In the Church of Norquist, Coburn's assertion is equivalent to saying that the Vatican is ready to cut a deal with Planned Parenthood that would allow some abortions. Norquist wasted no time communicating his dismay to The Hill.

Norquist told The Hill that the piece is filed with “lies” and said that Coburn is violating, and trying to get colleagues to violate, a pledge they made to voters...

He also said that Coburn’s claims about his colleagues turning their backs on the pledge are false.

“When Coburn stands up and says, 'I want to raise taxes,' he stands alone,” Norquist said.

Norquist said that Coburn ... appears to have “gone native or developed Stockholm Syndrome” from spending too much time with Sen. Dick Durbin (D-Ill.) in Gang of Six meetings.

While the notion that Tom Coburn is the 21st-century's equivalent to Hearst-heiress-turned-Symbionese-Liberation-Army-terrorist Patty Hearst is amusing to contemplate (who knew that liberal Democratic senators were so adept at psychological warfare!) the real story here is that cracks in the GOP's Great Wall of Anti-Taxes are finally starting to show. Coburn makes a convoluted case that the real villains here are Democrats who have been pumping up Norquist as a political "boogeyman" as part of their evil plan to make Republicans look intransigent, but he's fooling nobody. Republicans have indeed been extraordinarily intransigent, to the point that the government's ability to accomplish even the most trivial legislation has been  hamstrung. And Norquist is a big reason why, which of course explains why Coburn's been taking him on in such high-profile fashion.

How big will those cracks spread? It's hard to be optimistic in a world where someone as conservative as Tom Coburn is playing the role of liberal, compared to the rank and file of House Republicans. But some kind of deal on taxes and the budget is going to be cut before the "fiscal cliff" at the end of this year, and if Democrats hold firm, the Coburn-Norquist squabbling is a sign that there may be some weaknesses to exploit in the GOP united front.