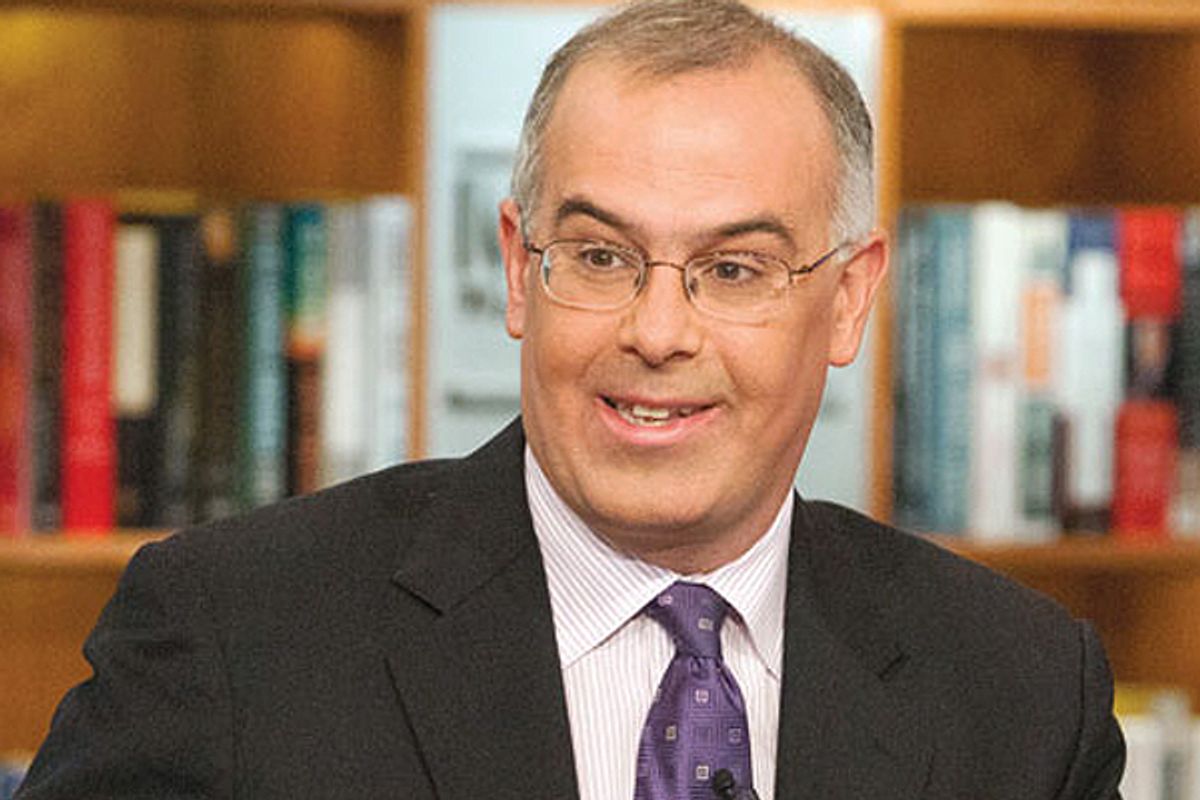 In today's New York Times, moderate conservative columnist David Brooks presents the middlebrow version of the "Obama is attacking capitalism" line, and, as usual, he does so poorly and with much unintentional humor.

The idea is that Obama's ad with Romney singing, and the outsourcing headlines and so on, is an "audacious" attack on the free market that "challenges the entire logic of capitalism as it has existed over several decades," and that Romney must immediately "define a vision of modern capitalism" persuasive enough to win over a nation seduced by Obama's irresponsible notion that there could theoretically be a form of American capitalism that doesn't lead to so much misery and inequality.

The ad makes Brooks mad because, as he notes (correctly!), Obama himself, as a moderate Democrat, actually has no problem with globalization as currently practiced. But it's not just the hypocrisy! It's the vile idea that Bain Capital's practices were somehow not a great thing for the nation.

"Worthy" is an opaque word choice there, but I'm going to go out on a limb and say "global business leaders" have indeed been behaving amorally for the past half century and most of the half centuries prior. (And whether outsourcing is "good" or not, patriotism doesn't enter into it at all. It would be bad business to let outdated notions of patriotism interfere with efficiency and shareholder value! No true capitalist would place loyalty to a nation-state above corporate best practices!)

But this ad, tragically, "has shifted the focus of the race from being about big government, which Obama represents, to being about capitalism, which Romney represents." (As Brooks patently refuses to understand, Romney doesn't represent "capitalism"; he represents financialization -- but that's a different post altogether.)

This is Brooks' thesis, which is a common enough sentiment among rich folks around the middle of the ideological divide: Modern capitalism would be much more popular if its beneficiaries were better able to explain to the less fortunate why their misfortunes are, in an important, broader sense, a good thing. (You don't understand: Working harder for less money is a productivity gain!)

This all leads to the single funniest claim David Brooks has ever made (emphasis mine):

The Romney campaign doesn’t seem to know how to respond. For centuries, business leaders have been inept when writers, intellectuals and politicians attacked capitalism, and, so far, the Romney campaign is continuing that streak.

Ha ha, poor business leaders, beset on all sides, powerless to defend themselves against rhetorical criticism. "Oh heavens, Mr. Carnegie, the intellectuals and politicians are attacking capitalism again! What ever shall we do?" "I'm afraid we haven't any defense whatsoever against this attack besides our near-complete control of the political process and national economy, and also all these Pinkerton police we hired to infiltrate labor unions and crush organizing attempts with deadly force."

Mitt Romney, please, I beg you, loudly and publicly defend the form of capitalism you pioneered at Bain Capital. It would be hilarious (and possibly lead to a socialist revolution).