Can Mitt hide his taxes forever?

A new ad hits him for stonewalling, and another conservative calls on him to release more tax returns 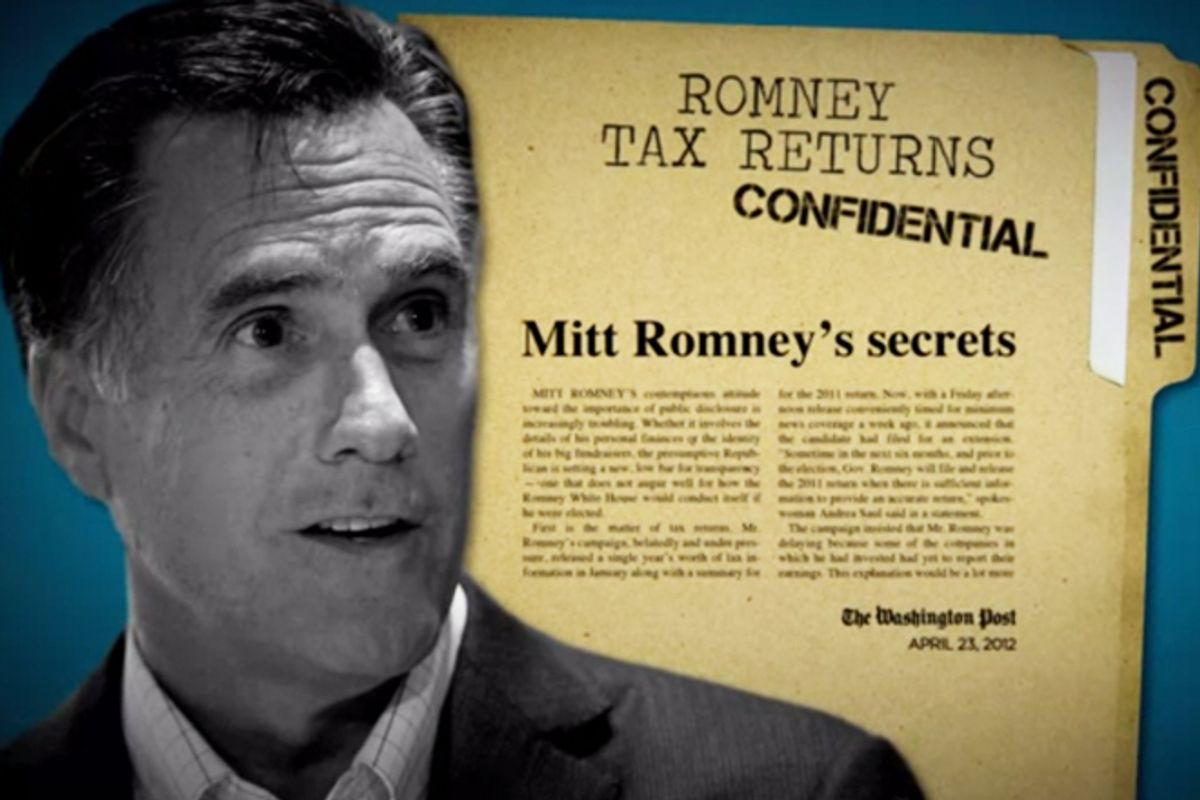 “Anytime it's disclosure versus nondisclosure, you always wonder whether it isn't better just to put it out there,” he said on Bill O’Reilly’s Fox News show last night.

Hume’s comment came a few hours after Haley Barbour used an interview with ABC News to reiterate his call for Romney to put out more tax records.  “The advice I would give Romney is, Who cares about your tax returns?” Barbour said. “Release 'em! We need for this campaign to be about Obama's record."

Other conservatives who have offered similar advice include George Will, who said on Sunday that the Romney campaign is “losing in a big way” on the topic, Bill Kristol, and Alabama Gov. Robert Bentley.

So far, Romney has released his returns from 2010 and an estimate for 2011, with a promise that he will release that year’s full return when it’s completed. But he’s drawn a line at putting out information for any other years. This is causing him two problems. The first is with the Obama campaign, which is jumping at the chance to paint Romney as a man with something to hide.    Today, for instance, Obama’s team launched this ad:

The bigger problem for Romney, though, is that the media has also latched on to the story, pressing him to explain why he won’t release more and exploring all of the possible reasons he might be reluctant to share his past returns – especially the possibility that his effective tax rate might have been at or close to zero in some recent years.

Romney and his team haven’t helped themselves by offering bogus precedents for a presidential candidate releasing so little tax information, a response that has only encouraged the media to push harder. A measure of how big the story has become to the nonpartisan press came last night, when CNN’s Erin Burnett abandoned her neutral pose and excoriated Romney for not coming clean.

It’s hard to believe Romney can ride out the next four months without offering up some additional records. Of course, as Joan Walsh noted yesterday, it’s possible the returns Romney is now sitting on contain information that would be more damaging than what he’s now enduring. Then again, what little tax information Romney has released already reveal investments in Swiss bank accounts and offshore havens and an effective tax rate of just 13.9 percent. So the image of him as an extravagantly rich man who benefits from a tax system that’s skewed toward the investor class is already established. Assuming he’s done nothing illegal (surely the IRS would have taken notice if he had), would it really be that much worse for Romney if documents came out showing he paid an even lower effective rate in some years?

Maybe the calendar offers a clue about Romney’s thinking. In just over a week, the London Olympics will kick off. If you’re going to release more embarrassing tax returns, maybe that would be the ideal time?