Money laundering for drug dealers, terrorists and gangsters is the latest evidence of financial sector corruption 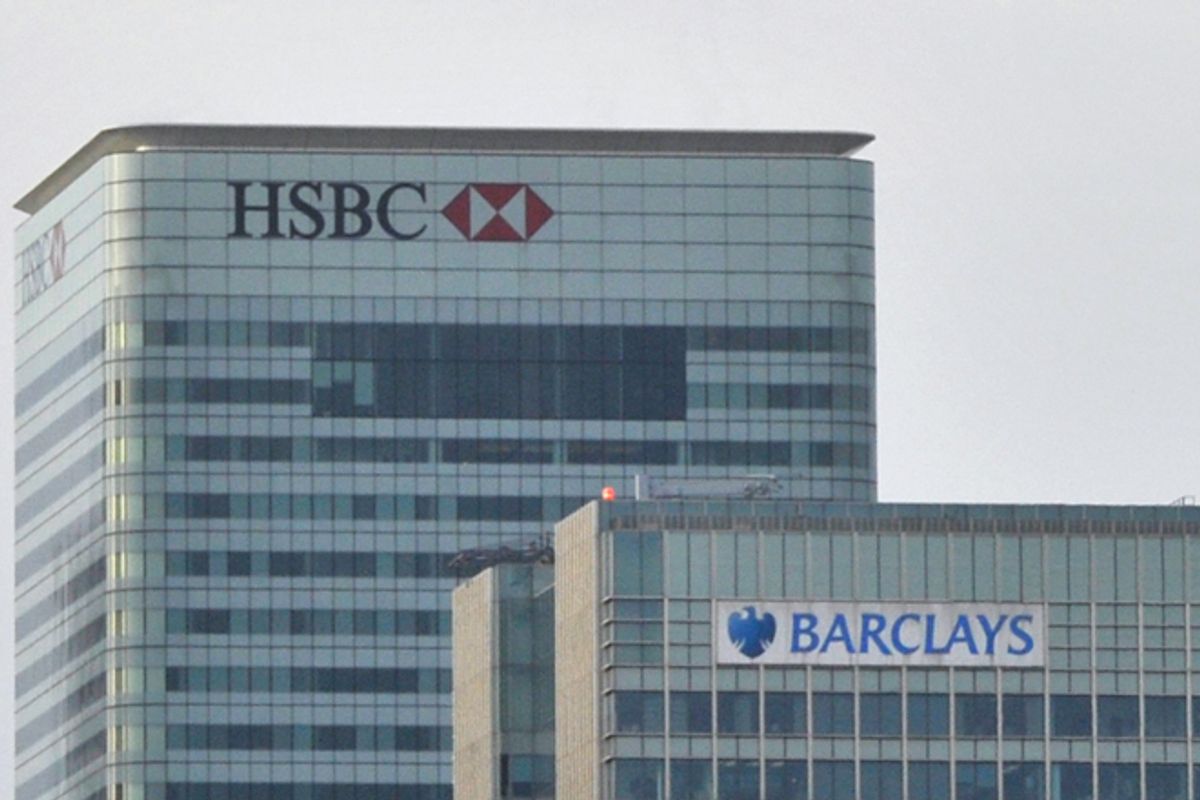 And you thought bankers fixing interest rates and playing games with mortgage-backed securities was bad? How about laundering money for Mexican drug dealers, the Russian mafia and Mideast terrorists?

OK, if we're talking about the potential economic impact on the average person, the interest rate and mortgage shenanigans are really bad, probably more so than the money laundering apparently brokered on a massive scale by the huge international bank HSBC. But even so, the new report from the Senate's Permanent Subcommittee on Investigations detailing HSBC's multiple failings over the past years is quite the doozy. It reads like a treatment for a villain in a James Bond thriller that never got greenlighted because it was too unrealistic. We could accept getting in bed with the Russians -- but the drug dealers and the terrorists as well? That's overkill.

The first takeaway from the HSBC story is of a rogue bank that didn't care where the money was coming from as long as it kept pouring in. To take just one hilarious example: For several years, HSBC's U.S. money-processing centers were clearing vast amounts of extraordinarily dubious traveler's checks for a Japanese bank. On a typical day, HSBC would process half a million dollars worth of sequentially numbered traveler's checks that were signed and countersigned by the same (illegible) person. When a curious low-level HSBC flunky tried to learn more about where the money was coming from, all he could find out from the Japanese bank was that the checks were being purchased by around 30 or so "used car salesmen." The used car salesmen turned out to have Russian surnames, which is the kind of thing that should wave a big honking red flag to any bank official. Russian nationals were buying hundreds of thousands of dollars of American-dollar-denominated traveler's checks from a Japanese bank every single day? If you're looking to convert ill-gotten rubles into clean American dollars, that's how you go about it.

The second takeaway is a failure of regulation. The Senate report repeatedly lashes the Office of the Comptroller of the Currency for failing to act on multiple warning signs that HSBC was in bed with all sorts of the wrong people. This should not come as a surprise to anyone familiar with OCC's pathetic record of bank supervision leading up to the financial crisis. (For the definitive treatment of this topic, please read Zach Carter's blockbuster demolition of John Dugan, the Bush appointee who was in charge of OCC right before the financial crash.) The OCC provides us with the definition of "captive regulator" -- it was an agency more concerned with preventing restrictions on bank behavior that might hurt profits than on cracking down on behavior that could harm the economy.

But the biggest takeaway from this drama is how HSBC's behavior underlines, emphasizes and highlights what we already know about the banking industry in general: It is corrupt at every level, and the bigger the bank, the less likely it is to be a responsible player. HSBC failings were egregious to the point of absurdity -- it's hard to imagine someone like JPMorgan's Jamie Dimon allowing his underlings to be so wayward. But in principle, HSBC's actions were no different from the machinations of the Barclays traders who fiddled with Libor, or the chicanery of the Goldman-Sachs traders who created mortgage-backed securities designed to fail, sold those securities to their clients, and then bet on their failure, or the self-interested greed of any of the banks funneling millions of dollars to lobbyists in an effort to prevent further regulation.

That greed is inexhaustible. Their every action serves to bolster the argument that they should be broken up into tiny pieces and their executives jailed. Once upon a time, you could make an argument with a straight face that it was necessary to keep the banking industry upright in order to avoid a larger systemic failure. But the more we know, the more disgusting the whole charade becomes.