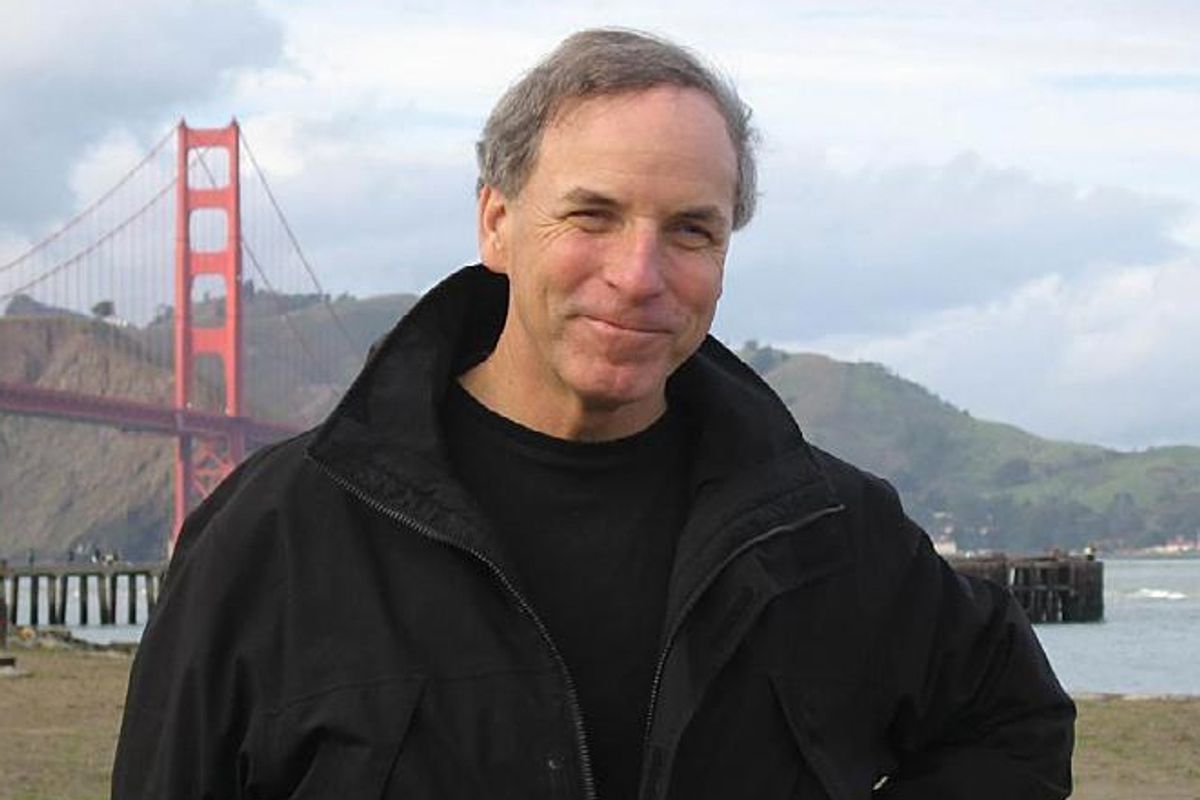 In the spring of 1981, a seemingly unremarkable poem called “Pop” appeared in the Occidental College literary magazine. It began:

Sitting in his seat, a seat broad and broken
In, sprinkled with ashes
Pop switches channels, takes another
Shot of Seagrams, neat, and asks
What to do with me, a green young man
Who fails to consider the
Flim and Flam of the world…

On the surface, it is a poem about a young man’s relationship with, and ambivalence toward, a paternal figure. But in recent years, attentive readers have noticed some extraordinary subtext: In fact, it is a poem about pederasty and sexual abuse. What’s more, it is shot through with clues that its author -- Barack Obama -- was not its author at all, that “Pop” himself was its true author, and that “Pop” was also, unbeknownst to its false author, its false author’s true father.

Barack Obama is the Rimbaud of American poetry. He was active only briefly, during his teenage years, after which he moved on to other pursuits and spoke dismissively of his underripe verses. Yet those youthful efforts have attracted a cult of devoted readers, many of whom showed no prior interest in poetry. And his tiny body of work — just three published poems — has inspired an enormous body of criticism, one that grows every time a new biography like David Maraniss’ "Barack Obama: The Story" brings the president’s juvenilia back to the public’s attention.

No critic has been more energetic than Jack Cashill, a blogger for AmericanThinker.com and WorldNetDaily and the author of "Deconstructing Obama: The Life, Loves, and Letters of America’s First Postmodern President." Cashill is well-matched with his subject, because he is a postmodern critic. He may think of himself as an old-fashioned close reader of texts, but he’s a theory guy at heart — someone who applies a single big idea, like feminism or Marxism, to everything he reads. Cashill’s theory, specifically, is that “Obama’s entire life is one massive fraud,” and he looks at the president’s writings through that lens alone. Poetry is perfect for this line of literary inquiry because it’s so opaque and ambiguous, and therefore subject to limitless interpretation. Cashill has written that “Pop” is “arguably the Rosetta Stone of the Obama psyche.”

Like his fellow postmodernists, Cashill is capable of recognizing multiple and even mutually exclusive truths. When he first encountered Obama’s poetry back in 2008, he knew immediately that it was terrible. At the time, he was building his case that Bill Ayers (of Weather Underground infamy) was the true author of Obama’s celebrated memoir "Dreams From My Father," and he was happy to have a few more bricks for that argument’s foundation. Surely, no one who wrote bad poetry as a college sophomore could produce a book of polished, thoughtful prose just 15 years later. “Obama had composed what he calls some ‘very bad poetry,’ and he does not sell himself short...,” Cashill wrote. “These poems [‘Pop’ and ‘Underground’] are only a little sillier than the average undergraduate’s, but they show not a glint of promise.”

By 2010, though, Cashill was pursuing a more ambitious theory, and it required him to reevaluate the poems. He now believed that Obama had been a literary fraud from the beginning and that the actual author of “Pop” was Frank Marshall Davis, a significant poet and journalist who had been a sort of godfather figure to Obama during his childhood in Hawaii. Like many other black intellectuals of his generation, Davis had at one time been a communist. He had also written, pseudonymously, a book of pornographic prose in the late 1960s. Needless to say, the prospect of proving that Obama was a serial borrower from better writers who also happened to be unrepentant bombers, communists and pornographers touched several of Cashill’s pleasure centers at once.

By great good fortune, when Cashill took a second look at “Pop,” he discovered that it was in fact an excellent poem — far too excellent to have been written by Obama. “This is more hunch than science,” he wrote, “but I suspect that as a reward for the young Obama’s friendship, Davis may well have slipped this ‘green young man’ a poem or two for publication. Nowhere else in his unaided oeuvre, such as it is, does Obama show the language control he does in ‘Pop.’ Such an everyday scam would not have seemed unethical to an old Communist.”

Cashill compared “Pop” and an even earlier poem from Obama’s high school literary magazine with a late Davis lyric, and he found the old poet’s fingerprints all over the young man’s work: “All three poems show a comparable sophistication in language and structure. Written in free verse, each makes ready use of what is called ‘enjambment’ — that, [Cashill’s comma] is the abrupt continuation of a sentence from one line into the next.”

Cashill knows just enough about poetry to help people who know nothing about poetry come to a proper misunderstanding of it. His definition of enjambment is almost correct, and it’s true that both Obama and Davis make ready use of it, as have most poets for the past hundred years. But poetry critics have a more precise term for the kind of enjambment Obama employs: “bad line breaks.” Concluding lines with weak little function words is not, typically, a mark of sophistication in poetry. It’s the mark of a beginning poet who is enjoying being the boss of the right-hand margin and who has not thought seriously about the line as a unit of composition. In 60 years of writing poetry, Frank Marshall Davis never once broke a line at “the,” despite its being the most common word in the language; Obama does it four times in three poems. (To be fair, that may be evidence that Davis took pains to conceal his authorship.)

As you might imagine, Cashill’s arguments about Obama’s paternity and Davis’ pederasty are even subtler and more involved. I’m afraid I don’t have the space or the stamina to engage them fully, but here are a couple of highlights:

In response to the blistering blog post Cashill is composing even as you read this, I can only concede that he’s right: I am ignoring most of his arguments. When my son was 5, he asked me if I thought his 1-year-old sister was “president of all the babies in the world — I mean, like, secretly,” and I had to admit that I couldn’t prove she wasn’t. I also have to admit that I’m not crazy about the Cashill-like character this assignment is turning me into — combing through a guy’s writings, pulling out the most egregious contradictions, describing them in a superior tone. If Cashill is wasting his life writing about Obama, what exactly am I doing writing about Cashill?

And yet I find him a fascinating subject — complicated, tragic, at times oddly sympathetic. Other than my own loved ones, I don’t think I’ve ever cared about anybody as much as Cashill cares about Obama. He’s a Javert, an Ahab, consumed by a perfect monomania: The world must believe that Barack Obama is a semiliterate phony. That’s the only thing Cashill wants, and he’ll never get it.

And Cashill isn’t some loner blogging from the pine-paneled bedroom of his childhood. As far as I can tell, he’s an otherwise respectable citizen — the executive editor of Ingram’s magazine and a contributing writer to non-loony conservative publications like the Wall Street Journal. What could drive such a seemingly well-adjusted person to spend his life chasing theories that are, as my now-6-year-old daughter would say, totally coo-coo beans?

Let me complete my transformation into Cashill by offering a theory about that. It’s more hunch than science, mind you.

Cashill is a writer, and not a bad one. He can be engaging, resourceful and intentionally funny. He does need a better editor (one should avoid referring to a book’s “forward” or making liberal use of the Shatner comma when mocking cosmetic errors in other people’s prose), but it’s clear that he takes his craft seriously and has put in his years. And he is constantly using his own writing as a yardstick with which to measure Obama’s. He seems incredulous every time Obama chooses a word or makes a reference that he doesn’t recognize, and there’s a touching unguardedness about that. He argues, hilariously, that the word “ballast” in "Dreams from My Father" constitutes “very nearly conclusive” proof that Ayers, a former merchant seaman, wrote the book: “As a writer, especially in the pre-Google era of 'Dreams,' I would never have used an image as specific as ‘ballast’ unless I knew exactly what I was talking about.” It can’t be coincidence, Cashill submits, that Obama and Ayers both use “baleful” in their memoirs: “I had to look it up.” Asserting that Obama must have plagiarized portions of his college-era love letters, Cashill marvels that the Columbia senior “has the wherewithal to put an umlaut over the ‘u’ in Münzer … I had not even heard of Münzer before reading this letter.” And he’s astonished that Obama didn’t remember the poem from his high school magazine when reminded of it in 2008: “By contrast, I can still recite the poem that won a class contest when I was a freshman in high school.”

Seeing Obama lead the free world may infuriate Cashill, but that’s garden-variety political anger. Seeing Obama celebrated as an author — that’s personal, and intolerable. You can’t fake being a good writer, and yet Obama is doing it. Or maybe Obama really is a good writer, and that’s even worse. There he goes again, using words Jack Cashill has never heard, citing authors Jack Cashill has never read, failing to make errors Jack Cashill would have made, laughing off his undergraduate poems while Jack Cashill pores over them, deep into the night, begging them to betray their author once and for all. There he goes, forgetting all about a poem he wrote in high school while Jack Cashill recites his own prize-winning composition, proudly, to an audience of one.

Eric McHenry has written about poetry for Slate, the New York Times Book Review, and other publications. He teaches English at Washburn University.