Emmy nominations: Is this Lena Dunham and Claire Danes' year? 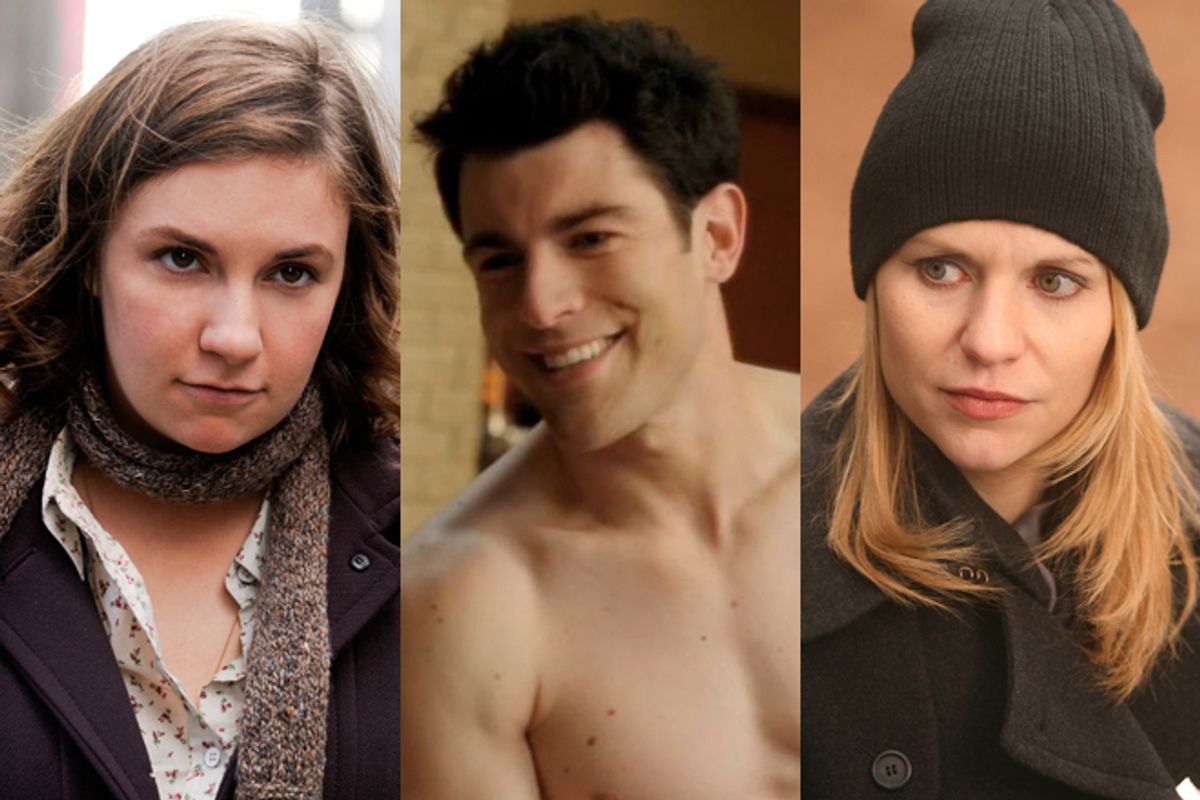 The Emmys — 2012 nominations will be announced tomorrow morning — are a bit like the Oscars' talented, handsome (but not quite as talented or handsome) little brother. As far as awards shows go, they're a pretty big deal (more prestigious if less fun than the Golden Globes; more famous than the SAGs; more reputable than the People’s Choice, America’s Choice, MTV Choice; less likely to feature performances from Skrillex and/or Steely Dan than the Grammys). But the campaigning, as well as the event itself, are relatively tame in comparison to the three-ring hype circus that is the Oscars. (Though there have been some moves this year to make the Emmys race as much a spectator sport as the Oscars). TV stars are still not quite as glamorous as movie stars, Jon Hamm aside, and because they are up for the same awards year after year, as are the shows they appear on, the Emmys have an element of sameness the movie awards lack. But if some things are preordained (like, Alec Baldwin will get nominated and so will all the adult actors on "Modern Family"), not everything is set. Here are some things I’ll be looking out for tomorrow morning.

“Homeland,” which hasn’t been on your TV for almost a year, should join “Mad Men” and “Breaking Bad” as one of the big drama kahunas this go-round. Claire Danes is not only a lock for a nomination, she’s pretty much a lock to win (and to do fun things for maternity wear while she does). The show should get nominated for best drama, and Damien Lewis deserves to get nominated for best actor in a drama as well. Even if “Homeland” doesn’t win for anything other than Danes, the timing of its Season 2 premiere should turn the Emmys into a big push for the show. The Emmys air on Sept. 23;“Homeland” premieres on Sept. 30.

2. How will the girls fare?

The L.A. Times has asked if “girls could rule the Emmys,” wondering how the spate of female-centric comedies unveiled this past year — everything from “Whitney,” “Two Broke Girls,” “Apartment 23,” “Are You There, Chelsea?” “BFF” and “New Girl” to “Girls” —  might actually do during awards season. Unsurprisingly, the only two legit contenders are the only two shows that were very good: “New Girl” and “Girls.” To get best-comedy nominations the shows would have to break into a category that is sure to include "Modern Family,” “30 Rock,” “Big Bang Theory,” and “Parks and Recreation”; will probably include the horrible “Glee”; and absolutely should include the excellent “Louie.” They may stand a better chance on the "best actress in a comedy" front, where both Lena Dunham and Zooey Deschanel are legitimate contenders, with a chance to bump off nominees from last year like Martha Plimpton, Laura Linney and Edie Falco. Of course, even if Dunham does get nominated, the real oversight is that “Girls'” Adam Driver, Hannah's hateable-lovable boyfriend, doesn’t stand a chance.

Last year the delectable British costume drama “Downton Abbey” won an Emmy for best miniseries. This year it will have to make a go of it in the best-drama category, alongside sure things “Mad Men,” “Breaking Bad” and “Homeland,” and less sure things like “Game of Thrones,” “Boardwalk Empire” and “The Good Wife.” (This should leave room for “American Horror Story” to clean up in the miniseries category, presumably the only show in that very Merchant-Ivory category to feature a guy in bondage gear.) I love “Downton Abbey” beyond reason, but it got very silly in its second season, and while it will always be better than the ersatz serious drama “Boardwalk,” it’s hard to think of it as really competing against “Mad Men” or “Breaking Bad” — I imagine petits fours facing off with a handgun. Still, I’m rooting for it and for Maggie Smith, whose dowager countess is a pretty sure thing in the best supporting actress category.

4. The fate of Schmidt

Oh, Schmidt! Wonderful Schmidt! The ridiculous, hilarious, indelible Schmidt! How will “New Girl’s” breakout character fare tomorrow morning? It’s pretty hard to call. Schmidt — or, fine, the actor who plays him, Max Greenfield — is trying to get a nomination as the best supporting actor in a comedy series, which is hard, since four of the spots will be taken up by the cast of “Modern Family.” (Last year Ed O’Neill was the only one of “Modern Family’s” men who didn’t get nominated, but that will be rectified.) That leaves two spots open for some combination of Chris Colfer, Neil Patrick Harris, Ron Swanson and Schmidty. If Schmidt is outdone by Swanson, I will not complain (though I do hope Swanson sends Schmidt a package of meat as consolation), but if he is pushed out by anyone else, I will be outraged and disappointed.

5. Some wonderful actors who don't stand a chance

Schmidt stands a small chance. These great actors don’t, and I will be outraged afresh about this fact tomorrow a.m.: the aforementioned Adam Driver; “Downton Abbey’s” Michelle Dockery, who as Lady Mary is the star of the show but is not yet famous enough here to be appropriately recognized; Jared Harris, who played “Mad Men’s” tragic Lane Pryce; Joel Kinnaman, the reason to watch “The Killing”; “Happy Endings'” Eliza Coupe and her on-screen hubby Damon Wayans Jr. (who should win the nonexistent “best TV couple” category, as reigning champs Mr. and Mrs. Coach are no longer eligible); “Parenthood’s” Lauren Graham; “Shameless’s Emmy Rossum.

6. Some wonderful actors who do

While nursing my ire about the fate of Schmidt, Lady Mary and the rest, I will at least be very happy about these folks, who all seem like sure things, and deserve to be: Louis CK, Peter Dinklage, Bryan Cranston, Amy Poehler, Christina Hendricks, Jon Hamm, Aaron Paul, Elizabeth Moss,and “Luck’s” Nick Nolte, mostly because that man now has the deepest, craggiest voice and I just want to hear him talk and talk and talk.