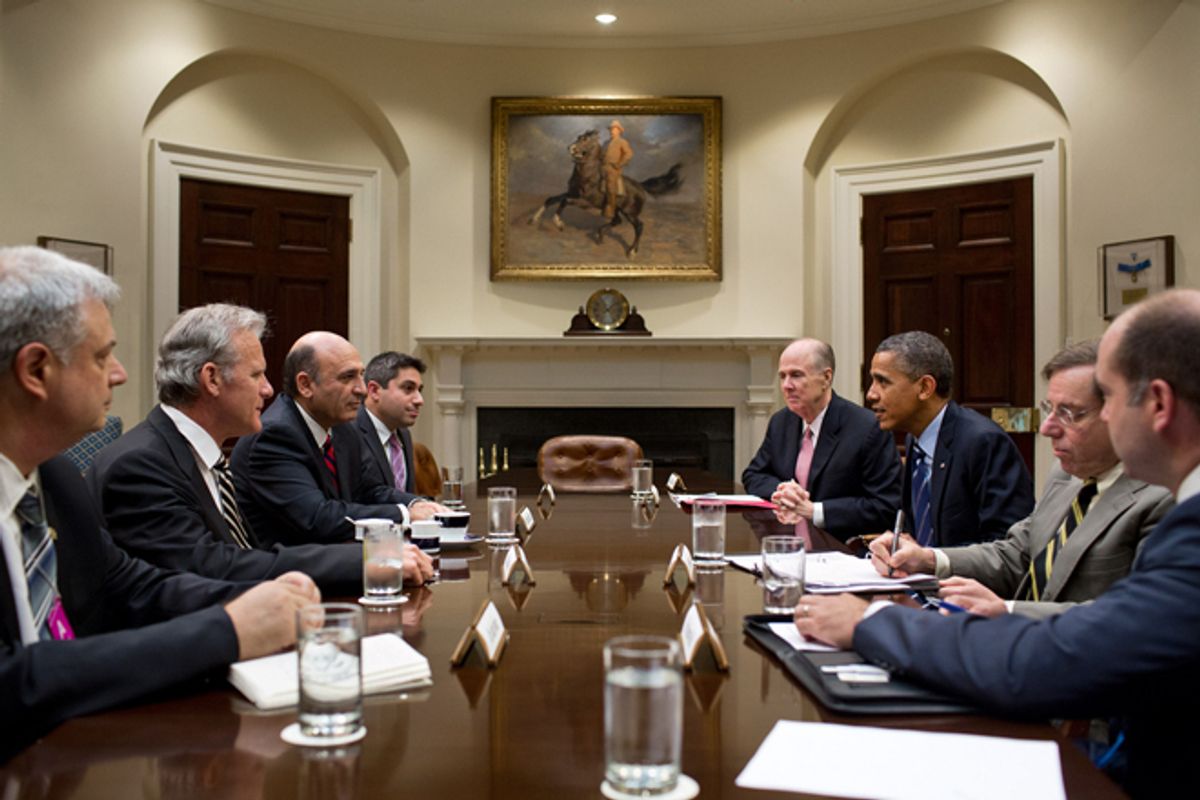 President Obama drops by a meeting in the Roosevelt Room of the White House, June 21, 2012. (The White House/Pete Souza)
--

The ACLU and the Center for Constitutional Rights this morning filed a lawsuit in federal court against several Obama officials, including Defense Secretary Leon Panetta and CIA Director David Petraeus. The suit is brought on behalf of the survivors of three American citizens killed in Yemen by the U.S. Government -- killed specifically by the CIA and the Pentagon's Joint Special Operations Command -- with no due process and far from any battlefield: Anwar Awlaki and Samir Khan (killed together in a drone strike) and Awlaki's teenaged son Abdulrahman (killed two weeks later).

The suit alleges that the killing of these Americans violates their Constitutional rights (including their Fifth Amendment right to due process) because "the United States was not engaged in an armed conflict with or within Yemen" and "these killings rely on vague legal standards, a closed executive process, and evidence never presented to the courts." While there is substantial dispute over the role, if any, that the senior Awlaki played in Al Qaeda plots (the Complaint alleges that he "was not then directly participating in hostilities within the meaning of the law of war"), nobody -- not even the U.S. Government -- claims that Khan or the American teenager were combatants of any kind. None of the three had ever been indicted, let alone convicted, by the U.S. Government.

Just to provide a sense of the magnitude and radicalism of the powers at stake here, consider this paragraph from the Complaint:

To see how extreme these powers manifest in a specific assassination, consider the circumstances that led to the death of the American teenager:

I've written countless times about the reasons these seized powers are so extremist, menacing, unconstitutional and wrong, so I won't recount them here. Instead, I want to focus on what should be an area of agreement raised by this lawsuit among those who oppose Obama's assassination program and those who support it.

Even many supporters of the Awlaki assassination are bothered by the way in which President Obama has arrogated unto himself the right to order the execution of citizens without a shred of judicial review or transparency. For instance, one of the American media's most vocal defenders of both Barack Obama generally and his assassination powers specifically, Andrew Sullivan, in responding to criticisms from Conor Friedersdorf and Tom Junod, just yesterday wrote:

But [Junod] goes on to make a vital point:

[W]hen Sullivan asks what I consider an alternative to lethal operations, my answer is not any of the ones he provides: it's not war or surrender. It's anything that will provide a check and a balance to a power that no president before President Obama has wielded so confidently, and with such a busy hand. It's the reintroduction of some semblance of democratic norms to a program that has left them far behind.

And that's where I am more than happy to join Tom - and Conor - in believing that while the evidence, I believe, supports the morality of drone warfare compared with the workable alternatives, vesting all this judgment in the executive branch is not due process. And it is indeed dangerous as a precedent, especially given what Cheney did with expansive interpretations of executive power. Conor is dead-on about this:

If we're presuming a world where a widespread campaign of drone assassinations is a given, I'd have him build various safeguards into the program that limit the unchecked power he now recklessly claims as the executive's right. I'd have him anticipate the sorts of abuses that he worried about as a senator, demonstrating that he damn well understands them. I'd ask him to stop using the secrecy he has created to elevate defenders of his procedures and silence critics who express important misgivings.

Congressional and judicial scrutiny and buy-in makes sense to me. Urgent sense, actually.

So, for the moment, let's put aside the question of whether Obama's drone assassinations are justified. Shouldn't we all be able to agree that the power to order people executed (including U.S. citizens) is far too extreme and dangerous to vest in one person without any checks, review, oversight or transparency? After all, it was a consensus among Democrats that George Bush should be forced to obtain judicial review before merely spying on or detaining people, let alone ordering them executed by the CIA. If Andrew and other Obama defenders agree that "judicial scrutiny" is necessary, then they should cheer this lawsuit, which seeks judicial review, and more importantly, should condemn efforts by the Obama DOJ to argue that courts have no role to play here, either in assessing the legality of these actions or in compelling basic disclosure.

But the problem is that each time lawsuits have been brought against the Obama administration seeking either a judicial adjudication of the legality and constitutionality of assassinations, or even seeking basic transparency, the Obama administration has invoked secrecy, immunity and other procedural claims to bar courts from having any role to play. They have insisted repeatedly that they have no obligation to show evidence that the people they're targeting for death are guilty of anything. In other words, Obama officials have insisted -- following John Yoo's vision of executive omnipotence -- that these are decisions for the President, and him alone, to make. Back in 2010, The New York Times' Charlie Savage wrote about the application of the state secrets privilege even in the context of its presidential assassinations, and quoted the far-right, Bush-supporting, executive-power-revering lawyer David Rivkin as follows:

The government’s increasing use of the state secrets doctrine to shield its actions from judicial review has been contentious. Some officials have argued that invoking it in the Awlaki matter, about which so much is already public, would risk a backlash. David Rivkin, a lawyer in the White House of President George H. W. Bush, echoed that concern.

“I’m a huge fan of executive power, but if someone came up to you and said the government wants to target you and you can’t even talk about it in court to try to stop it, that’s too harsh even for me,” he said.

So if -- or, rather, when -- the Obama DOJ comes into court in response to this new lawsuit and demands that it be instantly dismissed (rather than defending the legality of its acts on the merits), shouldn't critics and supporters of the Obama assassination program alike jointly and strongly condemn that? After all, shouldn't proponents of this assassination power -- those, such as Andrew Sullivan, who believe it is legal and Constitutional for Obama to do this -- want more than anyone else for courts to adjudicate its legality?

UPDATE: At Esquire, Tom Junod has more thoughts on the implications of this new lawsuit.