The "Dark Knight" trilogy thunders to an end with this huge, gloomy, magnificent (and fascistic) spectacle 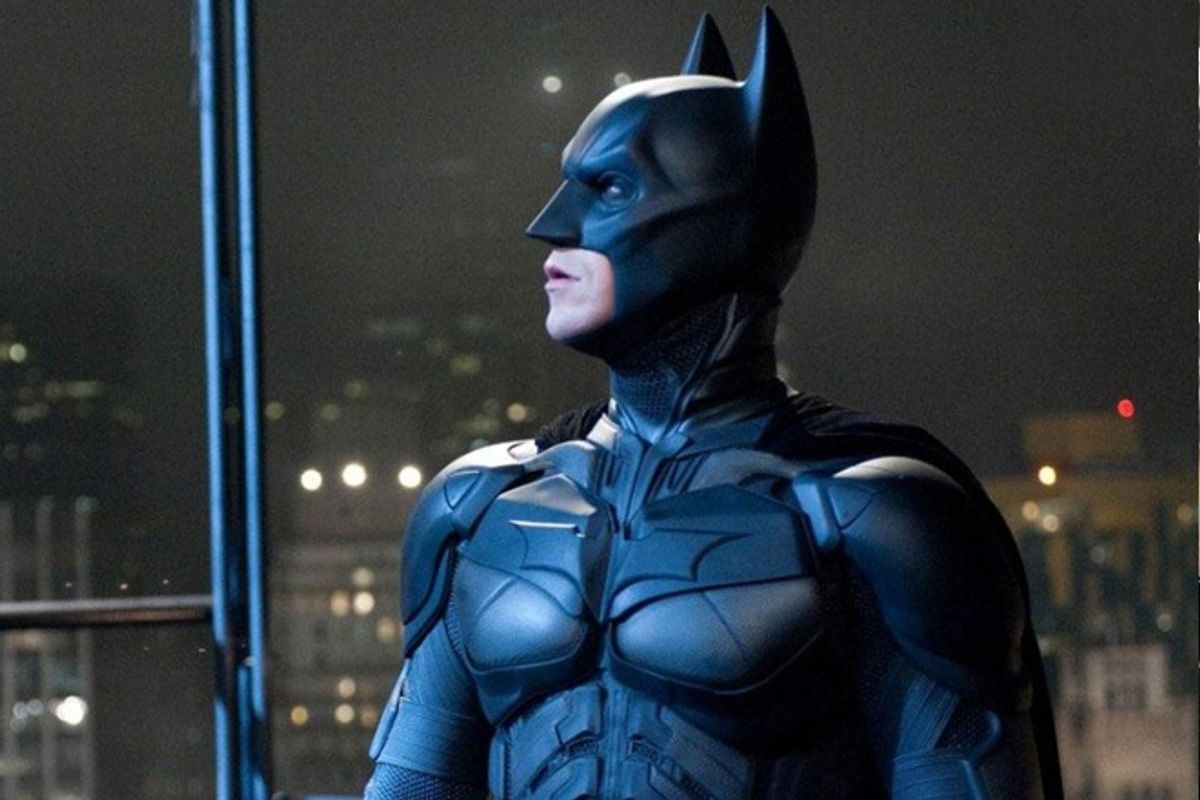 In one of the crucial, climactic scenes of Christopher Nolan's disturbing and triumphant "The Dark Knight Rises" -- which has so many crucial and climactic scenes I can't count them -- a major character has to risk death by climbing to daylight up a stone shaft, in order to escape from a dire underground prison in what seems to be the Middle East. No one (or almost no one) has ever made it out alive, the other prisoners report. In fact, we've already been told that the shaft and its promise of freedom are there only to offer the prisoners in the pit some delusional hope, much as some Christian doctrines hold that the damned souls in hell can see Paradise, but can never get there.

At about the same time, back in Bruce Wayne's hometown of Gotham -- which more closely resembles New York than it has before in this trilogy -- the city has fallen under the rule of a tyrannical, revolutionary regime closely modeled on the French Revolution's Reign of Terror. All bridges that connect the island city to the outside world have been dynamited, save one, a tightly policed Checkpoint Charlie where emergency supplies are allowed to enter but nothing can leave. Those prosecuted as traitors to the revolution, in kangaroo courts out of "Through the Looking-Glass" ("Sentence first -- verdict afterwards"), are offered the choice of death or exile, which come to the same thing. Either sentence is imposed by forcing the renegade out onto the cracking winter ice that surrounds the city and watching him try to totter and slide across to the safety of normal, non-revolutionary America. No one ever makes it.

I'm trying to make a number of points at once about "The Dark Knight Rises," but I can't help being distracted for a second by the fact that no living New Yorkers, in all likelihood, can remember significant winter ice on the Hudson or East rivers (which was relatively common in the 19th century). I honestly don't know whether Nolan is some kind of furious right-winger, and I also don't think it's an especially important question, but in his Batman universe global warming seems to be a myth. Of course the ice around Gotham, like that prison shaft, serves an allegorical as well as a narrative function. I'm tempted to argue that the real story of Nolan's "Dark Knight" trilogy is the story of its own creation, a dark, personal, auteurist spectacle on a scale never before possible and never before attempted, and an enormously successful mass-market entertainment to boot. If the central theme of these movies is the triumph of the will (to coin a phrase), then that triumph is not Batman's or Bruce Wayne's but that of solitary and devious superhero/supervillain Chris Nolan, as he imposes his bizarre obsessions on the entire world.

Let's back up for a minute and observe that all this stuff -- the French Revolution and the Middle Eastern pit-prison and the vision of America's greatest city capitulating to the ugliest kind of anarchy and terror -- happens in a Batman movie. There are all kinds of valid reasons not to like "The Dark Knight Rises," which absolutely does not offer the summery, pure-popcorn pleasure of something like Joss Whedon's "The Avengers." It's loud and bombastic and exceptionally long -- 164 minutes from opening to closing credits -- and brutal in several senses of the word, taking sadistic pleasure in both its scenes of violence and its Camus-meets-Nietzsche existential nihilism. It has no villain with even half the charisma of Heath Ledger's now-legendary Joker, since Tom Hardy's monstrous, 'roided-out Bane remains figuratively and literally a masked figure, behind his Hannibal Lecter-as-Darth Vader faceplate.

As I've suggested, I think it's a trap to read too much into this movie by way of political commentary, but whatever you come away with, it won't be uplifting. The Gotham status quo is a cynical regime based on "useful lies," false heroes and systemic inequality -- straight out of the playbook of neocon founding father Leo Strauss -- that corrupts even decent men like Gary Oldman's Commissioner Gordon. But the so-called revolution that overthrows it, overseen by the forbidding mercenary Bane (who is himself just the mouthpiece for a sinister hidden agenda, or several at once), is an Orwellian nightmare of atavism, unreason and anarchy.

It's no exaggeration to say that the "Dark Knight" universe is fascistic (and I'm not name-calling or claiming that Nolan has Nazi sympathies). It's simply a fact. Nolan's screenplay (co-written with his brother, Jonathan Nolan, and based on a story developed with David S. Goyer) simply pushes the Batman legend to its logical extreme, as a vision of human history understood as a struggle between superior individual wills, a tale of symbolic heroism and sacrifice set against the hopeless corruption of society. Maybe it's an oversimplification to say that that's the purest form of the ideology that was bequeathed from Richard Wagner to Nietzsche to Adolf Hitler, but not by much. Whether you think Nolan is endorsing or condemning that idea, or straddling the fence with a smirk on his face, is very much up to you.

But if "The Dark Knight Rises" is a fascist film, it's a great fascist film, and arguably the biggest, darkest, most thrilling and disturbing and utterly balls-out spectacle ever created for the screen. It's an unfriendly masterpiece that shows you only a little circle of daylight, way up there at the top of our collective prison shaft -- but a masterpiece nonetheless. Fighting against the tendency toward exhaustion in the final chapter of any entertainment franchise, Nolan, cinematographer Wally Pfister, editor Lee Smith, production designers Nathan Crowley and Kevin Kavanaugh, and their enormous team have done grandiose and magnificent work, spinning this operatic saga of a great city brought to its knees and an idol smashed.

I've had mixed feelings about Christian Bale's stony, underplayed performance as Batman and Bruce Wayne throughout this series, but it pays off here with his portrayal of an aging, ailing superhero -- demonized for crimes he did not commit -- who comes out of retirement, Michael Caine's loyal Alfred suggests, because he yearns to be destroyed. Alfred further says he thought it was a mistake for Bruce to return to Gotham from his youthful wanderings and don the Bat-cape in the first place: "I always knew there was nothing here for you but pain and tragedy." Setting aside Hardy's impressive but limited Bane, this movie has the best acting of the series, with brooding turns from Oldman (who spends much of the film in a hospital bed), the noticeably older Caine and Morgan Freeman, and the reliably terrific Joseph Gordon-Levitt as an idealistic young cop with a childhood connection to the Batman. (Longtime DC Comics buffs already know where his character is headed.)

Bruce now knows the truth about Rachel Dawes (Katie Holmes in "Batman Begins" and Maggie Gyllenhaal in "The Dark Knight"), his longtime love who had chosen to marry crusading D.A. Harvey Dent (Aaron Eckhart) before both of them died at the end of "The Dark Knight." Do-gooder socialite Miranda Tate (Marion Cotillard, also the mysterious muse in Nolan's "Inception") has designs on both Bruce's corporation and his irresistibly battered bod, but it's mischievous cat burglar Selina Kyle (Anne Hathaway) who gets his attention. Male-female romance has never been Nolan's strong suit, still less sexuality, but Hathaway's delectable and treacherous character adds a welcome dash of Eros (and just the tiniest echo of the 1960s Adam West TV series). Selina is never described herein as Catwoman, by the way, although a glimpsed newspaper headline alludes to that possible monicker.

But it's the fearsome Bane, and the non-metaphorical underground army he has assembled in the sewers of Gotham, that compel Batman's return. Again, I would argue that Nolan is mostly being provocative with this tale of underclass resentment, of an uprising by the lower half of the 99 percent that is turned to evil purposes. If so, it works. In its tremendous, almost apocalyptic action sequences, "The Dark Knight Rises" suggests a reverse-engineered version of a Soviet-era revolutionary epic, in which the masses are the villains and their onetime overlords the heroes. Bane's attack on a football stadium right after kickoff concludes a simultaneously brutal and elegant sequence, set against an angelic boy singing the national anthem, that's worthy of Martin Scorsese at his best. When Bane seizes control of Gotham, he claims to be acting in the name of the people, literally imprisoning the police and opening the prisons, but his method is terrorism on a grand scale, and his rhetoric of freedom is meant to pave the way for all-out annihilation.

Nolan carefully hits all the beats of the superhero action flick in the right order: Batman returns from exile, has an initial victory followed by a crushing defeat and the loss of his powers, and then must rebuild himself and make unexpected alliances in order to save the day. But the whole thing is cranked to 11, or maybe 13, the whole time, so it becomes barely recognizable. I guess this counts as a minor spoiler, but Batman receives a startling beatdown in this movie, one that belongs more to the universe of crime films than superhero fantasy. Bane leaves him alive only because he wants to make Bruce watch Gotham suffer, and needless to say that sadism will prove hubristic. (Even so, Bane is ultimately revealed as a tragic-romantic figure, pursuing mayhem and murder only out of love.) A fair piece of the story proceeds with Batman offstage, and Bruce Wayne literally crippled and helpless.

Arguably the Nolan-Goyer plot is unnecessarily complicated and loaded with MacGuffins, starting with a dynamite hijacking sequence that opens the film and continuing through an exciting stock-exchange hostage-taking sequence and Selina's irrelevant quest for a nugget of software that will erase her identity and allow her to start afresh. After a terrific late plot twist and a bravura, literally explosive conclusion that leaves Gotham -- and the mythical version of America it inhabits -- permanently scarred in a way Osama bin Laden could only dream about, Nolan dutifully drops us off at the gateway to another sequel, one he has said he won't direct. But he leaves future Batman filmmakers in an impossible position. They'll simply have to try something different, because for grandeur and pretension and evil genius and pure thrills -- for delivering exactly what the multiplex audience wants, in tremendous style, and undercutting it at the same time -- there's no way to top "The Dark Knight Rises."