Do foodies care about workers?

If food lovers are serious about bettering the world, they should pay more attention to the people who serve them 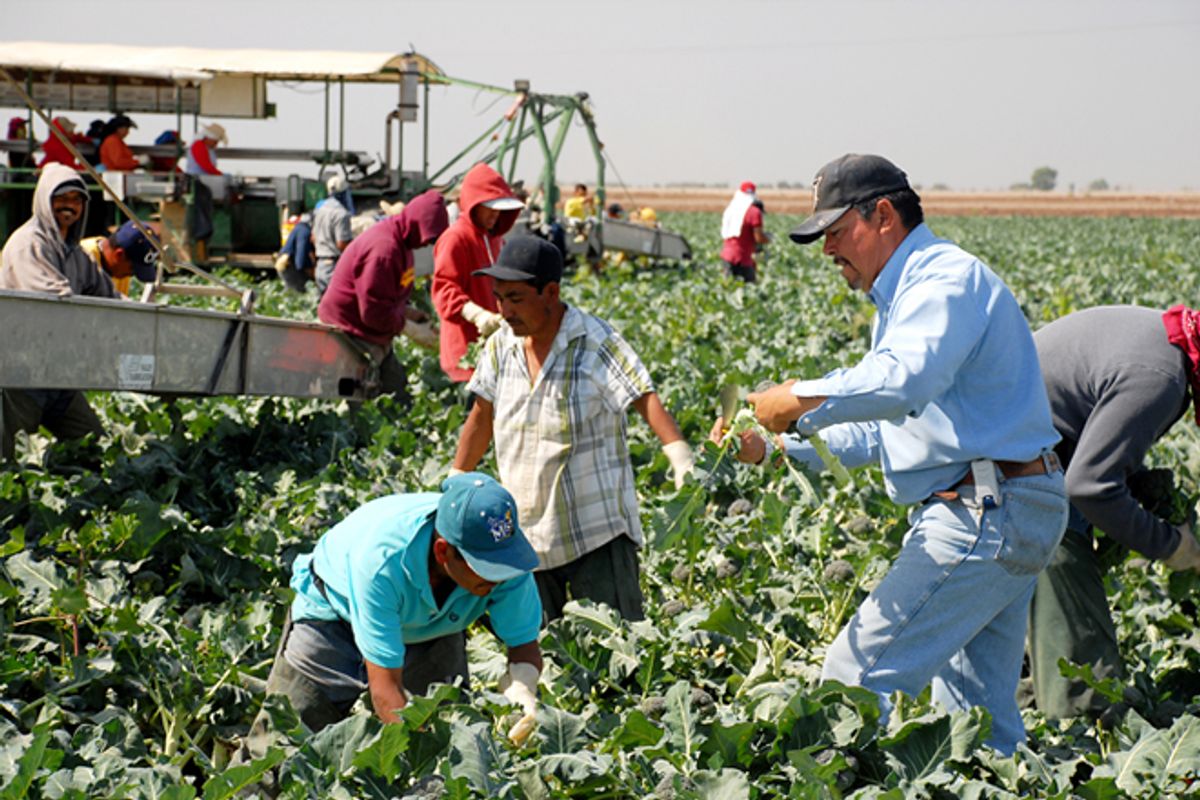 In a scene from the hit show "Portlandia," Fred Armisen and Carrie Brownstein play hipsters at a local restaurant. They ask about the chicken on the menu.

“The chicken is a heritage breed -- woodland-raised chicken that’s been fed a diet of sheep’s milk, soy and hazelnuts.”

“Is it local?” asks Armisen.

Then the questions get outlandish. Are the hazelnuts the chicken ate organic? USDA organic or some other standard of organic? How big is the area where the chickens are able to roam free?

Like a lot of great satire, the scene is funny because it so painfully reflects reality. And as in reality, the characters in the sketch never ask, “Does the poultry worker who killed the chicken get paid sick days?”

In fact, so-called foodies who are outraged at the idea of inhumanely raised pigs are remarkably uninterested in the inhumane work conditions of those who help get their pork to the table. Stopped at a farmers' market or in line at a top restaurant, foodies are definitely concerned when told about the dismal treatment of food workers. But does it shape their buying habits? Not really. Responses range from “I've never really thought about it” to “At least they have jobs.”

Yes, and those jobs are bad jobs and getting worse. The food industry employs one in five private sector workers. Yet only an estimated 13 percent of those workers make a living wage. Thanks to lobbying by the National Restaurant Association (once led by Herman Cain), the national minimum wage for tipped workers is $2.13 per hour. Many warehouse and farm workers are paid by the piece, which can amount to even less. And so, in a situation riddled with irony, food-system workers rely on food stamps at double the rate of rest of the U.S. workforce.

That’s right: That $22 dish of line-caught halibut with organic pea shoots and avocado gelée? The worker who washed the plate it’s on can’t afford to feed his family.

“We’ve always assumed that when we support organic farmers, we’re supporting people -- not only taking care of the land but also taking care of the people who work the land,” says Alice Waters, the chef-owner of Chez Panisse restaurant in Berkeley, Calif., considered the fairy godmother of the foodie universe. But more and more, we’re seeing the fallacy of that assumption.

For some time, the organic giant Whole Foods has been under scrutiny for labor abuses and union busting.  In 2005, the Coalition of Immokalee Workers won an agreement from Taco Bell to pay 1 cent more per pound of tomatoes, resulting in a 75 percent increase in wages for tomato pickers. And just this year, 3,000 diners at an Olive Garden in Fayetteville, N.C., had to be tested for hepatitis C because the company doesn’t provide paid sick days, and so an employee came to work ill. These and other horror stories are just the tip of the iceberg, according to “The Hands That Feed Us,” a recent report by the Food Chain Workers Alliance.

Slowly, food-sperts like Eric Schlosser and Mark Bittman are speaking up for food-worker justice, but consumers don’t seem to care much. Jessamyn Rodriguez founded Hot Bread Kitchen, a nonprofit bakery whose mission is to train and employ immigrant women. Rodriguez says customers are compelled by the workers'-rights pedigree of her products, but they don’t demand it the same way they demand pure ingredients. “It’s one step further from self-interest,” says Rodriguez. Of course, points out New York restaurateur and organic pioneer Peter Hoffman, the hipsters who drove the organic movement to prominence don’t care only about keeping their bodies clean. If that were the case, they’d drink substantially less beer and have fewer tattoos. Rather, the organic movement is as political as it is personal, a practical way to manifest environmental awareness in daily life. Your politics are what you eat. So why not eat what’s good for workers? There are even guidebooks to help .

It would be nice to think that, just as elite chefs and advocates had to lay the groundwork for the mass organic movement, so too will worker justice eventually make it onto the foodie table. Which sounds good, especially if you’d like to go back to that restaurant with the halibut that you love and not think about this any more.

But if it disturbs you that an estimated 79 percent of food-service workers don’t have paid sick days, 52 percent don’t receive health and safety training from their employers, 35 percent experience wage theft on a weekly basis, and 75 percent have never had an opportunity to apply for a better position, maybe it’s time to put down your fork and open your mouth. After all, these food-service workers are disproportionately black and Latino. Many are undocumented immigrants. It’s optimistic at best to think the traditionally elite, environmentally driven food movement will inevitably embrace the concerns of these workers and be the driving force for change.

In the food industry, as in America overall, the concerns of low-wage workers tend to get swept under the table. A generation of hipsters has built its identity around sustainable food. Maybe it’s time to start a new trend. The next time you order that hormone-free hamburger on a stone-ground bun with organic ketchup, ask for a side of worker justice.