Emmys shocker: They get it right

Voters turn geeky superfans and back "Mad Men," "Downton," "New Girl," Louis CK and "Girls" -- as they should 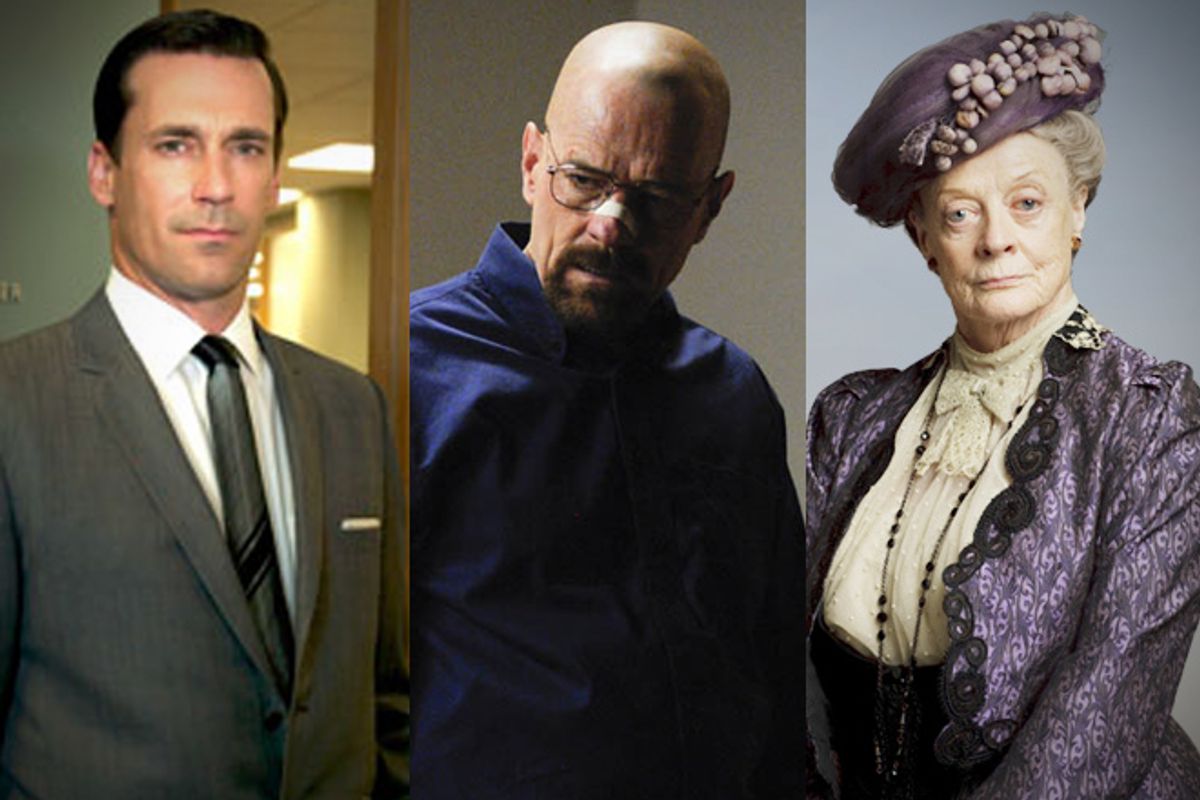 Emmy nominations were just announced (you can see a full list of nominees here), and while there are inevitably some disappointments — what, no “Parks and Recreation” in best-comedy category?? — this year the Emmy voters have done good, really good. They've behaved like people who not only watch TV but really adore the TV that they watch. Typically, the most frustrating thing about the Emmys has been the grandfathering in of previously nominated shows that have fallen off the quality cliff. This year, that bad habit was largely set aside. Aging shows like “Glee," “Dexter," and "The Office" made way for the new, better and more vibrant (“Downton Abbey,” “Homeland,” “Girls,” “Veep"). This year's Emmy nominations have a fan’s spirit.

Look at what happened with “Downton,” which cleaned up. Yesterday, I predicted that Lady Mary (Michelle Dockery) would not get nominated because she's not that famous. Shame on me. Anyone who watches “Downton Abbey” knows who she is, and it is now clear that Emmy voters don’t just watch “Downton Abbey”; they love “Downton Abbey.” (And for all of those who say "Downton" got worse in Season 2: It did. It was lovable anyway.) Not only did the show snag a best-drama nomination and a nod for Lady Mary, but Maggie Smith and Anna — for goodness' sake, Anna! — got nominated in the best supporting actress category, Hugh Bonneville got nominated for best actor in a drama (sorry Timothy Olyphant!), and Carson and Bates got nominated too! (It’s hilarious that the villains — Thomas and O’Brien — got shunned even though both had a million more things to do last season than Carson. Well, we do all watch “Downton” for the good guys.)

This sort of deep love for a show can be seen elsewhere too. “Breaking Bad,” “Mad Men,” Bryan Cranston, Jon Hamm, Elisabeth Moss, Christina Hendricks and Aaron Paul were all nominated, as was expected. What was not expected were the nominations for Lane Pryce, Gustavo Fring and Skyler White. For goodness sake, "Breaking Bad's" Tio Salamanca and his ring-a-ding-bell got a nomination for best guest actor in a drama. He will face off in that category against… “Mad Men’s” twitchy Ginsberg! What all of this says to me is that Emmy voters aren’t voting for “Breaking Bad” and “Mad Men” because they know they are supposed to, because they know they are prestigious, or because they’ve seen a couple of episodes. They are voting because they are watching, passionately and avidly. They are watching just like us, which might seem obvious, until you think about past Emmys or Oscars ceremonies where the voting body acquiesces to "common wisdom" and votes for what they “should,” for the prestige project, for the famous person, and not for what they love. Look, this year's Emmys snubbed Dustin Hoffman in a Michael Mann-David Milch HBO project, as they should have. Louis CK, meanwhile, was nominated no less than seven times!  (That said, they did nominate all four guys from "Modern Family" and Uma Thurman for her role in "Smash." Baby steps.) Even the fact that the networks were locked out of the best-drama race is exactly as it should be. It reflects the reality of TV right now: The best dramas are on cable.

The fannish spirit of this year’s nominations extended to a spate of exciting nods for new actors: Lena Dunham and Zooey Deschanel and Julia Louis-Dreyfus joined Tina, Amy, Edie and Melissa McCarthy in a powerhouse category, best actress in a comedy. Claire Danes and Damien Lewis of "Homeland" were recognized. “Big Bang Theory’s" Mayim Bialik, better known as Blossom, got a nod. “Nurse Jackie's” wonderful Merritt Weaver did too. And, closest to my heart, so did "New Girl's" Schmidt.

If there are some head scratchers — seriously, how do you leave out “Parks and Recreation” and Ron Swanson? “The Good Wife” should have been nominated over “Boardwalk”! How can “Mad Men’s” Marie Calvet (Julia Ormond) get nominated and not John Slattery?! How can the best comedy and the best comedy writing categories basically not overlap at all? And some silliness — how is it that "American Horror Story" is a miniseries again? At least maybe now Connie Britton will win the Emmy she should have won last year for "Friday Night Lights" and get to beat a nominated Nicole Kidman while doing it. How can "Community" continue to be ignored, even with the Harmon drama? This is as good a list of nominees as I’ve seen the Emmys assemble, a not-totally-accurate-but-not-so-inaccurate list of TV's very best.