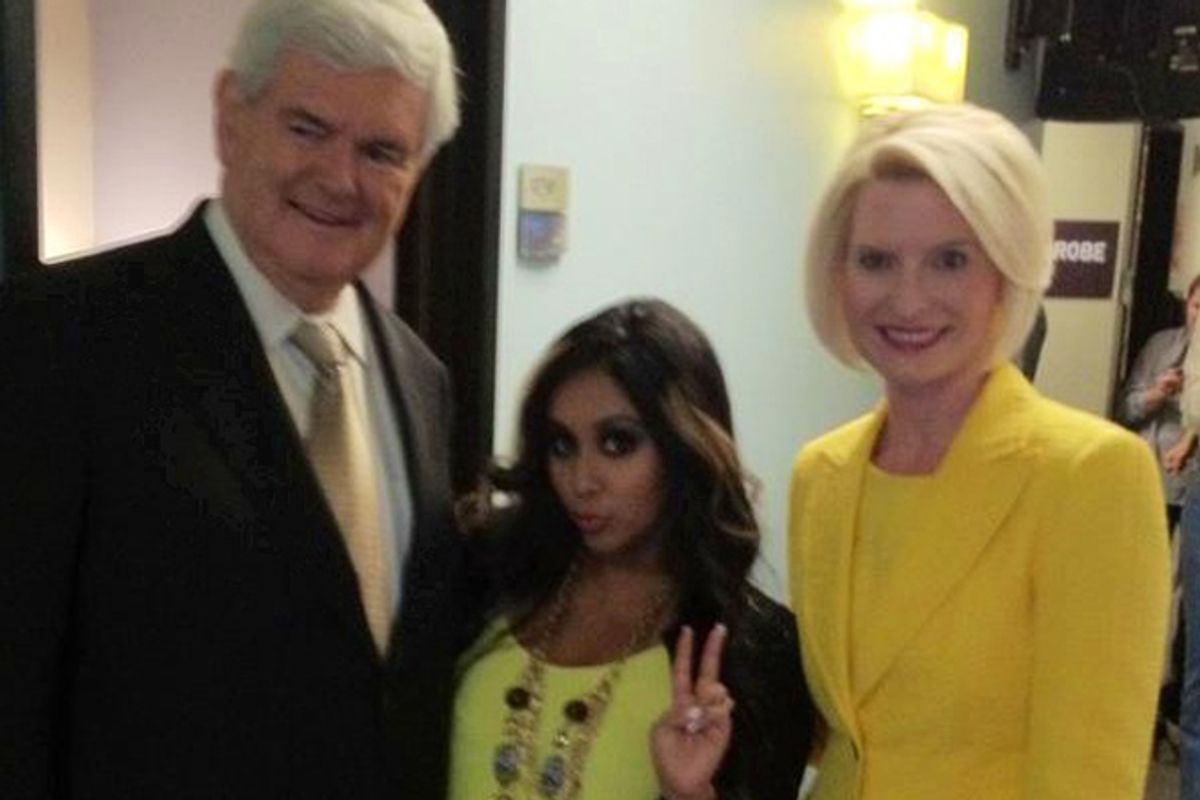 On the “Tonight Show” last night, Jay Leno presiding, Newt Gingrich and Nicole “Snooki” Polizzi met cute. Either because both are members of the famous-people club, whose constituents don’t stand on ceremony, or out of deference to the Snook’s one-name only status, only nicknames were exchanged: “Newt, Snooki. Snooki, Newt,” Leno said. The coziness escalated from there.

Newt has already expressed his excitement about the meeting, having tweeted earlier — in what at least one observer noted contained a logic flaw — “On the way to Snooki and Jay! Callista and I both look forward to what should be a fascinating show. Tonight Show is always a class act,” and behaved as such. As Snooki, in her matter-of-fact, controlled, “I’ll tell you anything you want to know and anything you don’t want to know” way, updated Jay on her pregnancy, her breasts, her marriage plans, Newt leaned forward -- friendly, curious, hanging on every word. The two are now tweeting at each other and have bequeathed the world this picture.

The exchange between Newt and Snooki contained the following nuggets. (1) Newt’s genuine, judgment-less interest in a person made famous for being drunk on TV (to earn his disdain, you have to be in politics). “‘I’m really impressed. I’ve seen clips of “Jersery Shore.” I’ve seen some of your interviews. It’s great,” he gushed. (2) Newt’s appreciation for Snooki’s stunning capitalist impulse. “Congratulations on having two New York Times bestsellers,” he complimented Snooki. She replied — as cagey as ever — without missing a beat, “I’m trying to be like you.” Newt sighed. Maybe he even blushed. (3) Newt seriously does not care about family values. After Snooki explained that she was definitely going to let her fiancé have strippers at his bachelor party, Leno asked Newt if he’d had strippers. “No,” he said, before following up with “I feel in someway like my life has been deprived." (4) Newt also approves of her parenting strategy, which will be to show her unborn son all her TV shows, and say, “Yes, I did that; don’t you do that,” the reality-TV version of “Do as I say, not as I do. Newt approved: “I like that phrase, 'Yes, I did that; don't you do that.” Of course he does. (5) Maybe he will cameo on Snooki’s TV show. “That would be great. I could just hang out," he said. "Do you drink, Newt?” Snooki asked. “Sometimes.” “Good for you,” said the pregnant lady.