Their odds of taking back the House are … not good. And the consequences will be significant, even if Obama wins 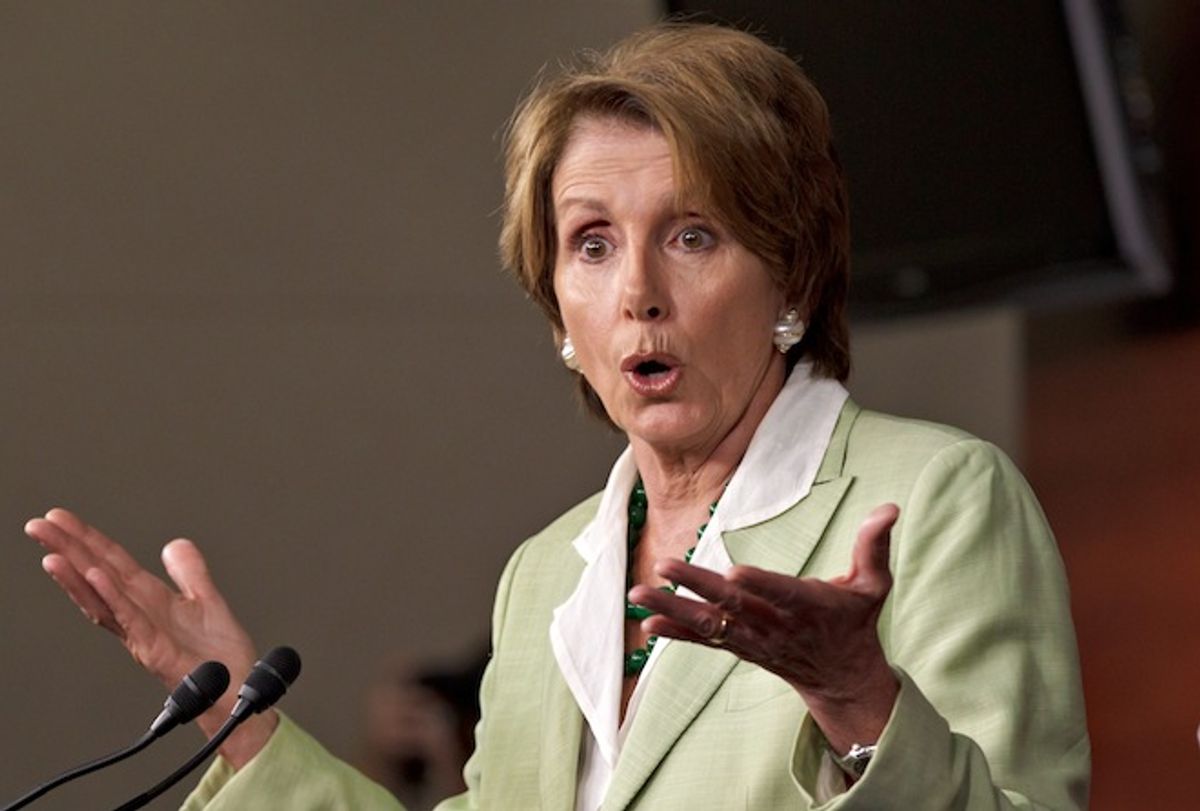 In a new interview with Politico’s Lois Romano, Nancy Pelosi puts on her rose-tinted glasses and explains how her party will win back control of the House this fall:

“Going to my home state of California — in our Drive for 25 in California and the president’s home state of Illinois and New York, Steve Israel’s state, and then in the state of Texas, which is not going to go Democratic for the president but we have opportunity there, in those four states, we can get half the votes we need to get to 25,” she says. “Then, you’ll go to my native state of Maryland, we’ll win one there.

“Onesy-twosies around the country, Washington state, Arizona, etc. , we get to the high teens [in Democratic gains]. Then, we go where the president is. He’s not been in any of these states yet — just raise money and take it to the battleground states, which is exactly what he should do. Then, we go to the battleground states — Florida, Pennsylvania, Ohio — like that, and we think that then we go from the high teens into the high 20s, I would say, possible to get to my 35.”

Twenty-five is the magic number for Democrats to take back the chamber and return the Speaker’s gavel to Pelosi, who would become the first person since Sam Rayburn to go from Speaker to minority leader and back again. But the scenario she paints is wildly optimistic.

The challenge Democrats face this fall is illustrated by the first installment of Scott Bland’s House race rankings, which were published at National Journal this week. Of the 25 seats Bland rates as most likely to change party hands, 13 are currently held by Democrats, 11 are held by Republicans and one represents a merged district (an Iowa contest between Democratic Rep. Leonard Boswell and Republican Rep. Tom Latham). It’s only when you get to the next set of 25 that Democrats enjoy a clear advantage in pick-up opportunities. But if every seat in Bland’s top 50 flips hands, it would only translate into a net gain of 11 for Democrats. And the further you get beyond the top 50, the less likely additional pick-ups for either side becomes.

Part of the reason Republicans are in fairly strong position is related to redistricting. Empowered by their 2010 landslide, GOP lawmakers in several states managed to redraw the congressional map in a way that created a handful of near-guarantee pick-ups.

Scandal is also boosting the GOP in two New England districts that should be safely Democratic. Accusations that he turned a blind eye to and benefited from his brother-in-law’s gambling activities have imperiled Massachusetts Rep. John Tierney, who has held his North Shore seat since 1996. No Republican has won a House race in the Bay State since 1994, but Bland rates Tierney’s seat as the 22nd most likely to flip in November. The situation is even worse for Democrats in neighboring Rhode Island, where belated revelations about Providence’s municipal finances during his mayoral tenure have made freshman Rep. David Cicilline an underdog in what is normally a Democratic redoubt. Losing seats like these makes getting to 25 even more difficult for Democrats.

What Democrats really need to get anywhere near 25 seats is a wave election similar to 2006 and 2008. But with the presidential race likely to be close, it’s hard to imagine something similar taking shape this fall. The example of 1996, the last time a Democratic president sought reelection, is worth keeping in mind here. Bill Clinton was in much stronger political shape that year than Obama is today, while the image of the Newt Gingrich-led House GOP was at least as battered as that of today’s House Republicans. Clinton ended up beating Bob Dole by 8 points that fall, but Democrats only picked up nine seats. In fairness, a late-breaking scandal about Clinton’s fundraising activities may have tightened the presidential race in its final few weeks, rescuing some down-ballot Republican candidates. But Clinton’s reelection experience (and Ronald Reagan’s in 1984, and Richard Nixon’s in 1972) shows how hard it can be for even a popular president to build a wave.

The House is looking like the Democrats’ weak link this fall. And the consequences could be substantial. Look at it this way: Obama could lose, but his odds of surviving aren’t bad. And his party’s chances of hanging on to the Senate are decent too. But as long as Republicans have a majority in the House, they’ll have all the power they need to stall Obama’s agenda. As Pelosi told Romano in an earlier interview, with the GOP running the lower chamber, “it’s going to be two years again of a presidency without a legislative agenda.”