Aurora shooting eyewitness: "We just ran for it"

Two teenage Aurora eyewitnesses tell Salon about seeing their friend shot: "He had blood pouring off of his arm" 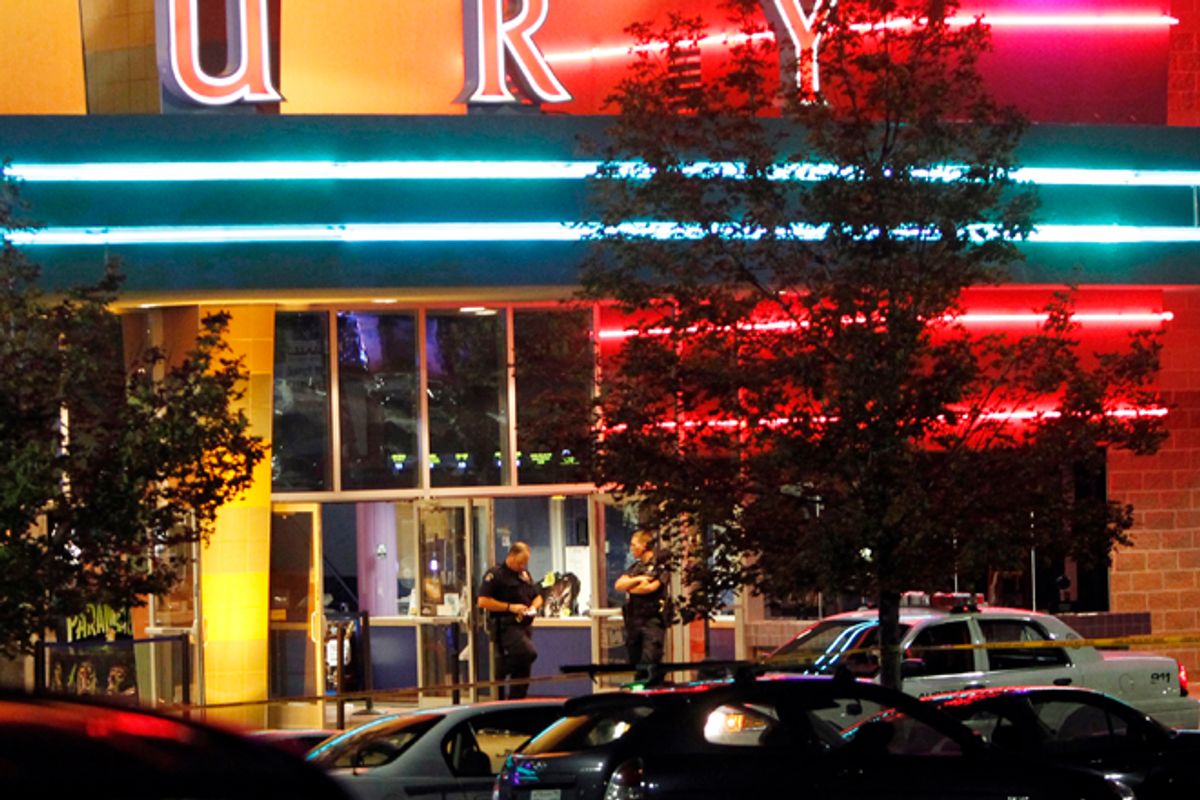 Police are pictured outside of a movie theatre where as many as 12 people were killed in Aurora, Colo. (AP Photo/Ed Andrieski) (Ed Andrieski)
--

Melanie Haiken and her two daughters, Melia and Linnea Schurig, came to Aurora, Colo., to attend a conference for families with children who stutter. It was the ninth straight year the family had attended the conference, and the community of families that comes together each summer keeps in close touch throughout the rest of the year. So close that this year a group of 12 teenagers had arranged to see the midnight showing of "The Dark Knight Rises."

"Parents weren't invited," said Haiken by phone from the conference. But with Melia a college sophomore at California's Humboldt State, and Linnea about to start her senior year of high school, the outing was hardly unusual. Her biggest worry, said Haiken, had to do with the fact that teenagers she didn't know that well would be driving in a strange town.

At 12:30, just as she went to bed, she noticed that she had turned the ringer off her phone and missed three messages from one daughter and two from the other. They were calling her from a car racing home from the theater. Her daughters were safe, but one of the 12 teenagers in the group was in the hospital -- he had been shot in the arm by James Holmes, the former Ph.D. student in neuroscience who went on a deadly rampage Thursday night in Aurora.

Linnea and Melia Schurig recounted their story to Salon.

We were in theater 8 [Holmes was in theater 9], and we were right on the aisle by the wall. About half an hour into the movie, there was suddenly this kind of firecracker sound. We didn't know what it was -- we thought it was like a prank, some kid was trying to be cool, and so we didn't really think anything. Then my friend who was sitting right behind me started yelling, "Oh my god, what the f---, what the hell just happened!" I turned around, and he had blood pouring off of his arm. We didn't know what it was. My first thought was that it was a piece of shrapnel from the smoke bomb. [They later realized that Holmes' first round of gunfire in theater 9 had penetrated the wall into theater 8.]

Then one of our group said that everybody should just stand up and get out of the theater. Nobody else in our theater knew what was going on -- there was a big gun battle going on the screen. So we were the first to leave the theater and then, as we were leaving, there was a second round of gunfire, and the panic started. We ran into the lobby, and people were shouting, "There's a shooter!" and freaking out.

And then we just ran for it. I ran and hid behind a car, but my friend who was hit couldn't make it. He couldn't see, he was blacking out, so we went back and huddled by the entrance with him. People were yelling, bleeding. I saw a woman holding a baby who was shot in the leg.

You always hear about terrorist attacks. It's a concept that you know and it's kind of scary, but it's not that close to you. But here people died and it could have been any of us. That's a lot more real.

Why? What is the motive? I don't understand. Everyone was panicking. I didn't understand what was going on. Why here? Why now? Why us? Why any one of us?

I remember right before the movie started, they wheeled in all these extra seats. I told my mother today that I was thinking, "This is why nobody shouts 'Fire!' in a movie theater. There's no way people could get out of here if something happened." I don’t even know why I thought that. I'm just really glad we left right away -- everybody was looking at us funny when we stood up to leave.

I have had kind of abstract fears of terrorists since 9/11 -- you have that on your radar, but it's never something you are very afraid of happening to you. This felt so surreal -- it is something that happens in newspapers. It makes me feel a little more fearful of things. You are never really safe from violence. Which is scary.

The thing that I keep getting hung up on is that they are reporting that 12 people are dead, and we were a group of 12 people. We could have been the 12 people who died.