Does Batman have blood on his hands?

The "Dark Knight" shootings are sure to reignite debate about violent media, but the real problem is bigger 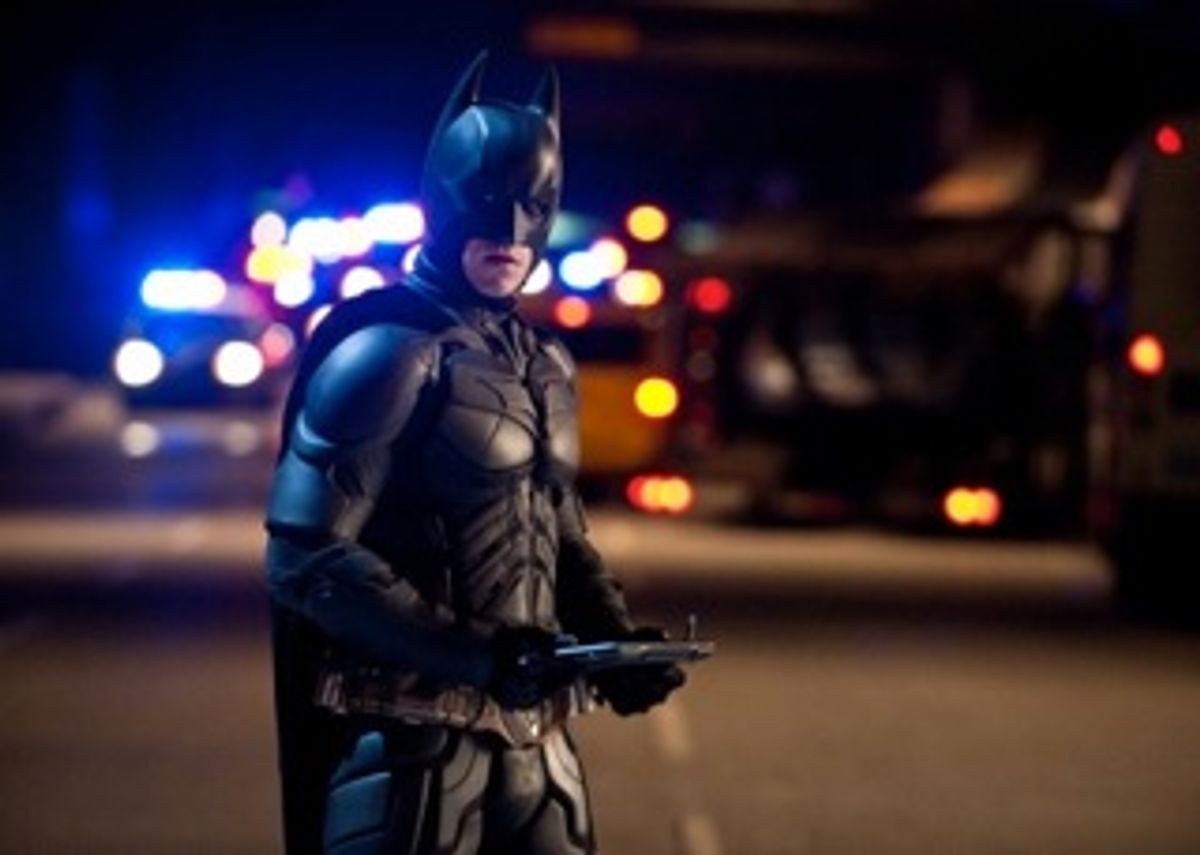 We still don't know enough about the shootings during a midnight screening of "The Dark Knight Rises" in suburban Denver to say much about the motivations of the gunman, who has been identified as a 24-year-old man named James Holmes. What we do know is that at least 12 people who went to the movies on Thursday night, no doubt excited to be among the first paying customers to see the biggest Hollywood spectacle of the year, are never going home again. At least 59 other moviegoers were reportedly injured, some of them seriously.

We also know that the reputation of Christopher Nolan's dark and violent blockbuster has been marred, perhaps permanently, by its association with these senseless murders. I can guarantee you that some of the more hardheaded executives at Warner Bros. are already wondering (in private) how this incident will affect the global box-office take, which is likely to exceed $1 billion. No one is ever likely to forget that "The Dark Knight Rises," a movie in which a masked supervillain imposes his will on ordinary people through violence and terror, apparently attracted the attention of a real-life masked villain who inflicted violence and terror on a theater full of total strangers. (To be clear, it seems unlikely that Holmes modeled himself after Bane, the villain played by Tom Hardy in "The Dark Knight Rises." Multiple news reports have indicated, however, that he identified himself to police as the Joker, the villain played by Heath Ledger in Nolan's previous Batman film.)

Whatever unknowable personal and private factors may have driven Holmes to commit these crimes -- let's emphasize that he hasn't been convicted of anything -- he has successfully elevated his empty and vicious actions to the level of grand spectacle. That's a dreadful thing to say, but it's true. What happened in the small hours of the night at that shopping center in Aurora, Colo., has become worldwide headline news and will be chewed over ad nauseam by TV talking heads and newspaper columnists in the weeks to come. Whether or not Holmes had any particular interest in "The Dark Knight Rises," he saw correctly that in our increasingly fragmented culture it was the biggest mass-culture story of the year and one of the biggest news stories of any kind. Shoot up a Ken-Taco-Hut or a Dunkin' Donuts, in standard suburban-nutjob fashion, and you get two or three days of news coverage, tops. Shoot up the premiere of a Batman movie, and you become a symbol and provoke a crisis of cultural soul-searching.

I know that's an awfully coldblooded analysis to offer in the immediate wake of a real-world event that has left families grieving for their loved ones, and severely injured people in hospitals clinging to life. Amid the sadness and anger and bewilderment that all decent people feel after something like this is the sense that mass killings of this kind are far too common in American life, and that our struggle to find explanations is not satisfactory. Within the first hour after the story of the Aurora shootings was posted on the New York Times website, several commenters suggested that violent Hollywood movies like "The Dark Knight Rises," or violent entertainment more generally, bore part of the responsibility for inspiring such theatrical acts of real violence. We are sure to see that long-running cultural issue -- which goes at least as far back as the spread of literacy and the "penny dreadful" novels of the 19th century -- discussed a great deal in the days ahead.

Does Batman, broadly speaking, have blood on his hands for what happened in Aurora? I'm a film critic and a hardcore civil libertarian who has spent much of my career defending free expression even in its nastiest and most disturbing forms. I do not believe that symbolic or fictional violence leads to real violence in any direct or causative manner. If it did, we would have seen rising crime rates in recent decades rather than the opposite, since violent entertainment has clearly become more realistic and more pervasive. So it may surprise you to learn that I think the question is a legitimate one and that, considered properly, it lacks a clear yes-or-no answer.

Perhaps the first thing to say is that so many factors are involved in crime and violence in America -- easy access to handguns, social inequality, the sweeping failures of our educational and healthcare systems -- that "Call of Duty" and Christopher Nolan movies are pretty far down the list of potential suspects. Most efforts to associate killing sprees with some fictional source, like the specious allegations that the Virginia Tech shootings in 2007 had been inspired by the Korean action film "Oldboy," are transparently ideological and lack solid evidence. Nonetheless, any time defenders of free expression respond to such charges by arguing, in essence, that art and culture have no discernible psychological effects, my B.S. meter starts clanging. If that were true, we wouldn't argue about them so much! We wouldn't even be interested.

You can find academic specialists on all sides of this issue, which may reflect the fact that violent entertainment has complicated and perhaps contradictory effects, which vary widely from individual to individual: It could be neutral for most people, for instance, desensitizing for some, and even beneficial or cathartic for others (as libertarian scholar Jib Fowles has argued). For a few unhealthy people on the margins of society, it could certainly provide unfortunate role modeling or inspiration. Again, we know almost nothing about James Holmes at this point, and I don't want to augment the tide of unfounded speculation. But eyewitnesses have apparently said that he began shooting during one of the movie's early action scenes; some people in the theater assumed the gunshots were a highly realistic sound effect.

Both literally and metaphorically, Holmes inserted himself into the spectacle at that moment, with a lovingly crafted soundtrack to match. By "spectacle" I don't just mean "The Dark Knight Rises," although it’s the biggest Hollywood tent-pole production of the year. I mean the larger sense of the term, pioneered in the '60s by situationist philosopher Guy Debord, who argued that our entire culture and indeed all of Western society had become a form of performance (or "representation," to use his word), in which the distinction between the symbolic realm and the realm of reality had been erased, and all social life was mediated by images and commodities. We live in "The Society of the Spectacle" far more today, in the age of the 24/7 news cycle and ubiquitous hand-held electronics, than Debord could possibly have imagined in 1967, when he published his prescient little volume under that title.

Debord's metaphor is a brilliant philosophical structure that can sometimes be taken too literally. Even the most cynical among us (I hope and believe) understand the real and terrible difference between ordinary people being killed for no reason in a movie theater and actors pretending to be killed on-screen in a superhero movie. But here's the point that got Jean Baudrillard and Karlheinz Stockhausen in such trouble after 9/11: Consumed via electronic media, as spectacle -- and within the spectacle, to use Debord's language -- they look about the same. What happened in Aurora, like what happened at Virginia Tech or what happened in Manhattan in September 2001, "seemed like a movie," as we so often say. Which may be why we're so eager to blame the movies -- a corner of the spectacle we can cordon off and pretend to understand -- instead of looking at the bigger picture.

Part of our outrage at the Aurora shootings, as my colleague Mary Elizabeth Williams has suggested, stems from the fact that the shooter has poisoned the collective joy of the moviegoing experience, one of the last widespread group activities in our segmented society. And another part of our dismay comes from the realization that Holmes' evil acts resemble a performance meant for mass consumption, a petty and despicable analogue to the movie itself, but nonetheless successful. It would be more decent, perhaps, to mourn the dead and ignore the killer, but we're not made that way. James Holmes has become the latest villain in a long-running violent movie for which we are all responsible and from which we can't turn away.