Crime is at a 40-year low, but nervous parents are limiting their kids' freedom to roam -- and it hurts urban life 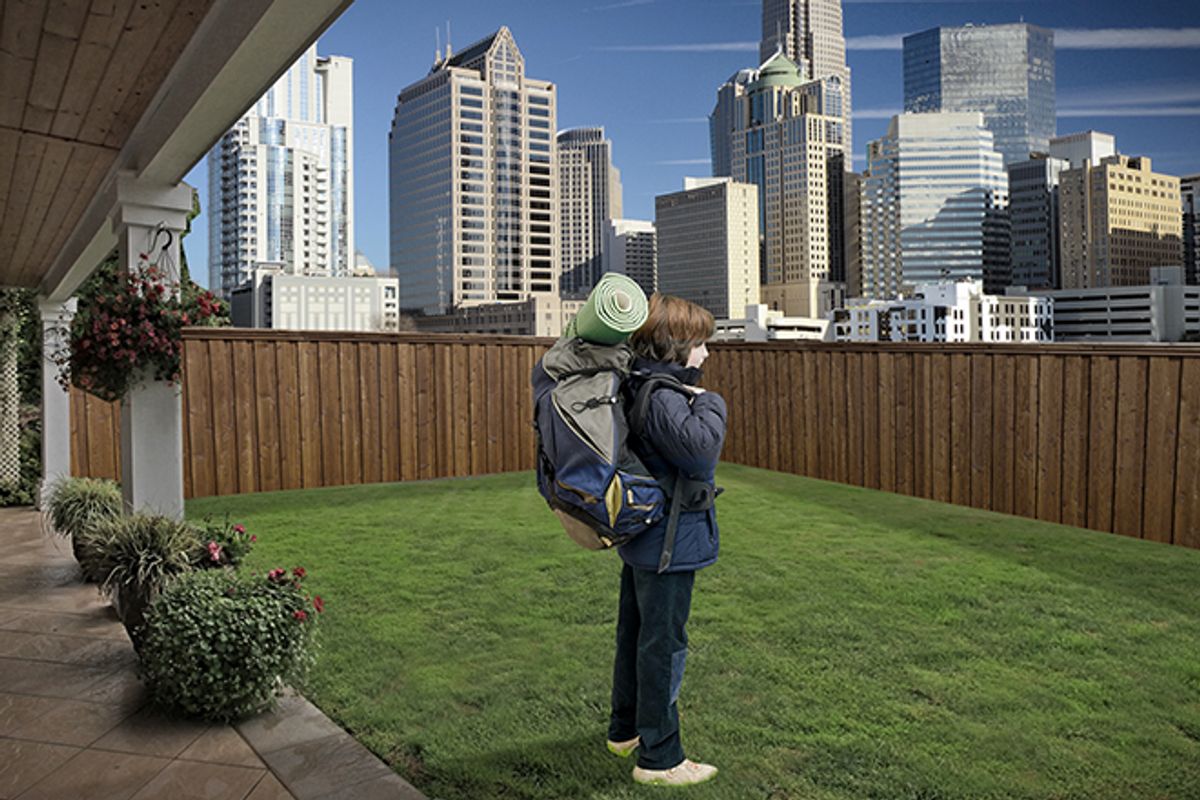 When Lenore Skenazy was growing up in Wilmette, Ill., in the 1960s, she routinely walked the four blocks between her home and her kindergarten all by herself. She knew to stay safe near traffic and not go anywhere with a stranger. And to help her cross the street was a friendly crossing guard -- a sixth-grader named Joey. "For the record, I ended up marrying him," she laughs.

That a kindergartner was allowed to toddle four blocks without adult supervision seems extraordinary now, even though cities are at least as safe for children today as they were then. Crime is at a 40-year low. The percentage of kids fatally hit by cars has been dropping for decades. And the child abductors that leer from every corner are tabloid fantasy -- only about 100 kids, out of tens of millions, are kidnapped in public by a stranger each year.

So naturally, children can now be found romping unsupervised throughout our neighborhoods, acquiring the intuition, resourcefulness and sense of independence that such a childhood provides, right?

Actually, no. In the time since Skenazy walked off to kindergarten alone, the number of children that can be found in public without supervision has only diminished. In one survey, 85 percent of mothers said they allowed their kids outside unsupervised less frequently than they themselves were allowed. In Britain, the average age of children allowed to play outside adult-free has risen by more than a year since the '70s, and 25 percent of 8- to 10-year-olds have never played outside without an adult. One study diagrammed the shrinking distances that four generations of one family's kids were allowed to stray from home: six miles in 1919, one mile in 1950, half a mile in 1979, and 300 yards today.

"I hear from people who have had cops show up at their door because a neighbor called them to report an unsupervised child playing outside," says Skenazy, now a mom herself who's become famous for her anti-helicopter ways. She travels the globe preaching the gospel of less-protective parenting and hosts an annual event called "Take Our Children to the Park and Leave Them There," which is exactly what it sounds like. It's not just for the kids' sake: Skenazy believes that free-roaming children are an integral part of what makes a good city. "When you're talking child-friendly, you're usually talking about the same things urban planners talk about: mixed-use, people outside, a rhythm to the streets."

She says the "Popsicle test" is a convenient way to use free-roaming kids to gauge a city's health. "If an 8-year-old child can go get a Popsicle from the store by themselves and finish it before they get home, that city is probably thriving," says Skenazy. Such an act is possible only in a walkable, reasonably safe environment that has a good pedestrian infrastructure and where retail and residences are relatively intermixed.

As it happens, this is exactly the type of environment that's proliferating in many cities. So why has kids' freedom to roam only faltered? Overprotective parenting is, of course, the culprit that first springs to mind. "We've come around to the idea that parenting is a skill," says psychologist Alex Russell. "We're now all aware that those early years are extremely formative." But another reason, says Russell, "is that we are parenting more and more in isolation. Parents used to parent in communities, but now it falls squarely on the mother and father."

Cities reinforce this paradigm with ever more creative ways of banning unsupervised kids, even though the definition of "unsupervised" depends on one's perspective. As Russell suggests, kids can be supervised in the absence of their parents. In the Sydney Morning Herald, a writer recently marveled at seeing children wandering unchaperoned all over Tokyo. When she worried to her Japanese colleague about the lack of adult supervision, he responded, "What do you mean, no adults? There were the car drivers, the shopkeepers, the other pedestrians." In Japan, 80 percent of kids between 6 and 12 walk to school grownup-free.

Part of this is simple geography -- Americans are more spread out than the Japanese. Sixty percent of Americans lived within two miles of their children's schools in 1969. Now, 40 percent do. This helps explain why, in 1969, walking or biking was the most common way of getting to school, according to a UCLA study. Today, only about 13 percent of kids get to school that way.

But the shift is also cultural. The UCLA study also details the differences between how kids get to school in Japan and the United States. Whereas half of all American kids now get dropped off by private car, that practice is banned at public schools in Japan, and even school buses are rare. Instead, the money is spent on crossing guards and an enviable pedestrian infrastructure. Children as young as 5, in a choreographed daily routine, arrive at each other's homes, one by two by three. Once a critical mass has formed, they walk the route as a group (in adorable yellow hats, no less).

Compare that to the U.S., where the anecdotes about unsupervised kids being caught in the net of paranoid parenting are as laughable as they are depressing: the Davidson, N.C., school that ended its long tradition of fifth graders walking to the village green over "concerns about safety"; the Pittsburgh dad who was charged with child endangerment for letting his 9- and 6-year-olds play in a park; the Florida community that banned anyone under 18 from being outdoors without a chaperone.

"It's almost a suburbanization of cities," says Skenazy. "The idea that we should keep kids in cars and hover at the park and be with them 24/7 -- it started in the suburbs and became the norm for parenting."

The withdrawal of unsupervised kids from the public sphere has a way of feeding on itself, as the recent congressional gutting of the federal transportation bill grimly illustrated. The bill cuts the already-tiny fraction of federal funding for bike and pedestrian infrastructure by 30 percent and contains loopholes that allow states to slash that even further. The lack of mainstream concern over this speaks volumes. In a culture where kids are free to roam, these types of budget cuts might spark the righteous parental outrage that effects change in Washington. But even in this era of super-safe parenting -- of BPA-free water bottles and PB&J-free schools -- the issue of more walkable streets remains tellingly hazy on the national radar. (Compare it to the outsize influence of Mothers Against Drunk Driving in the 1980s, a group that almost single-handedly pushed every state's legal drinking age to 21.)

Could this be because the very idea of letting kids get around without adults has become so incomprehensible to parents that they don't care how safe the infrastructure is? I had a revealing conversation about this with Nancy Pullen-Seufert, associate director at the National Center for Safe Routes to School (one of the programs on the transportation bill's chopping block, it so happens). When I asked her about this cultural shift, she emphasized how many cities buck the trend: "We have communities around the country that are the exact opposite of that. They're forming walking school buses, they're forming bicycle trains." Safe Routes has had great success with these strategies -- both of which involve close adult supervision. "The idea is, we can address a lot of parents' concerns when kids do it with peers while supervised by adults."

These are worthy endeavors indeed, but the difference between a walking school bus led by a chaperone and a group of 5-year-old Japanese kids getting to school on their own is the point itself.

Pullen-Seufert gets this, and I imagine that when she's not talking to a reporter, she's just as openly frustrated with parents' irrational fears as Lenore Skenazy is. "Sometimes what we hear from [parents] is, 'Look, my job is to protect my kid, and if this is one less thing I can expose them to, great, let's mark it off the list,'" she says. "For a while some organizations tried to convince parents by saying, 'Take the longer-range look: This is a way to build physical activity into your kid's day.' And some parents bought that, but a lot of others just said they could get the physical activity in other ways."

It says something that we perceive walking down the street to be a greater risk to kids than speeding along in two tons of steel and glass, when in actuality, four-fifths of kids killed by cars are in those cars. No parent, however, is going to be accused of endangering their child by driving them to school, but the parent who lets them walk might be -- the fear of being judged by other parents looms large. As does the fear of liability on the part of these schools and cities. "Our belief in our communities has been eroded by fears of lawsuits, insurance companies whaling on the schools, the constant din of horror story tonight at 6," says Skenazy.

So what's the antidote? Skenazy has thought about setting up a website, Find a Free-Range Friend, "like a dating site," she says. "You put in your kid's age and ZIP Code so you can find another parent and say, 'OK, you believe in it and I believe in it. Let's send them to the park together, or they can walk to school.'" Or, she says, just decide with another parent that you'll both send your kids to the park on Saturdays at, say, 10 a.m. "Once the kids are together, nature takes over," says Skenazy. "People need to take that first step to send their kids outside. That's how to break the ice ... The thing that gives parents the confidence to send their kids outside is seeing kids outside."

And seeing kids outside can give people confidence in their city, too. It can make them think twice about speeding in their cars and help old people age in place (kid- and senior-friendly infrastructures are often one and the same). "There's this intangible piece to it," says Pullen-Seufert, when asked what makes a true safe route for a child. "It's an overall community feel, where people just feel comfortable being out there."