During Sunday's vigil, several hundred demonstrators gathered in Aurora to shield families of the shooting victims 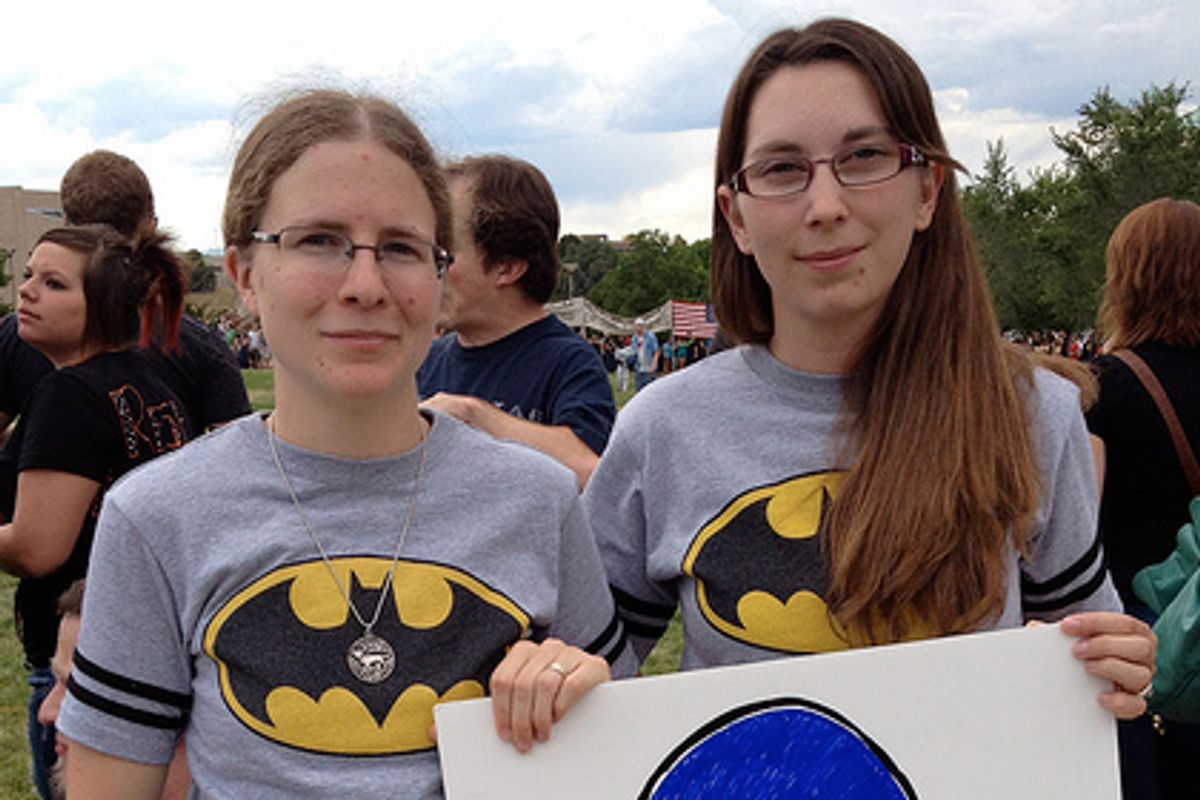 AURORA, Colo. – Linking arms in a human chain encircling a large swath of green grass in front of the Aurora Municipal Building, a young married couple vowed Sunday not to let anyone disturb mourners who had come to honor the city’s dead and to pay their respects to its newly knighted police heroes.

“The point is to create a silent barrier,” said Jamie McCurdy, 25, as she stood next to her wife, Kronda Seibert. “We’re not engaging them.”

The “them” McCurdy was referring to were members of the Westboro Baptist Church of Topeka, Kan., who were rumored to have traveled to Colorado on Sunday to disrupt a memorial and candlelight vigil for the 12 people who were gunned down on July 20 during a midnight premiere of the new Batman film, “The Dark Knight Rises.”

The church and its members are known for protesting at military funerals, where they brandish jarringly unsympathetic signs that condemn the United States for its growing acceptance of the gay community. Emblazoned on the church’s website are the words “God hates fags.” Indignant that Westboro supporters might show up at a peaceful vigil meant to honor the dead, McCurdy, Seibert and hundreds of other Coloradans mobilized for a “Colorado Rises” demonstration. Word of the planned human chain spread across Facebook on Saturday. By Sunday, McCurdy and Seibert were in Aurora linking arms with others at the memorial and vigil. Their goal? To create a protective barrier for the families of the shooting victims.

Ultimately, no Westboro demonstrators were spotted, but it didn’t stop people from staying in formation.

Eric Moore, a college student from Aurora, sat in a soccer chair in the human chain, hobbled by a dislocated knee. He arose from bed rest last Thursday and planned to see the new Batman film when the shootings occurred. The thought of anyone disrupting a memorial for the victims and their families drove him to participate in the demonstration. He also felt a connection to shooting victim AJ Boik. The two had never met, but they knew a lot of the same people. Boik, 18, had graduated recently from Gateway High School in Aurora and had scarcely started his adult life when he died from gunshot wounds suffered during the theater shootings.

Moore plans to see the new Batman film but will wait until the public focus on the shootings fades. He worries about copycat scenarios. Beyond that, “I’m a huge supporter of Batman and what he represents,” he said resolutely.

Brian Beckham, a Navy veteran originally from Knoxville, Tenn., stood quietly on the edge of the crowd but didn’t join in the human chain. He wore a white cowboy hat and a guayabera shirt and held a Bible under his arm that was zipped into a hand-tooled leather case engraved with crosses and other Christian symbols. He was ready in case anyone needed ministering and guidance.

Members of his church, the Calvary Church of Aurora, had been at the theater during the shooting and had ministered to the injured and traumatized after they fled the theater in horror. It was bad enough when shootings occurred during wartime, but “to think that it happened here on the home grounds” was even worse.

“Their kids went off to the movies, something you do in the summertime," said the veteran as he embraced his Bible. "Their lives were forever changed.”