Muzzled by a disaster

Post-Aurora, the predictable spectacle followed, allowing Obama, Romney and everyone to avoid the tough questions 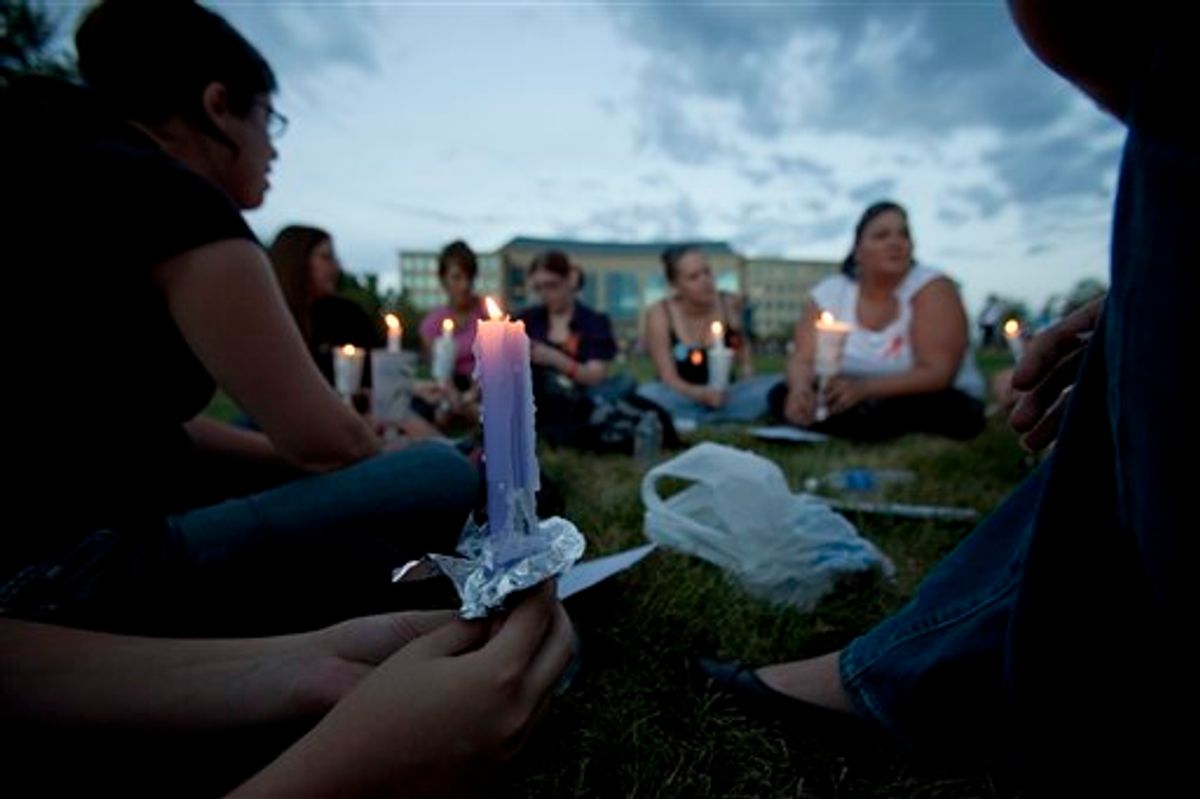 A group of friends with various connections to the deceased and wounded gather at a prayer vigil outside the Aurora Municipal Center in Aurora, Colo.,(AP/Barry Gutierrez) (Associated Press)
--

Cultures have rituals, and one of our most unique rituals is the Disaster Aftermath. A catastrophe hits, and we now expect a practiced and precise response: the interviews with survivors, the rhythmic press conferences at set daily times, the politicians preening for attention, the predictable partisan debates over alleged causes and supposed solutions. As the aftermath of the Aurora shooting shows in such hideous detail, this is America's funereal requiem in the soul-sucking Information Age, a clichéd spectacle that substitutes screeching noise for some desperately needed silence.

This perverse banality, of course, often ends up disrespecting the dead and undermining the healing process by shoving real-life victims into the maws of the Political-Media Monster. It's soul-sapping to watch, but, then, these post-atrocity atrocities do at least spotlight the ugly -- and often baseless -- assumptions that lurk in the shadows of our collective psyche.

As I noted on Friday, after Aurora, one assumption revolves around "terrorism," specifically, what it is, and what it is not.

Until Colorado Gov. John Hickenlooper (D) belatedly (and rightly) inserted "terrorism" into the discourse yesterday on NBC’s "Meet the Press," this most recent Disaster Aftermath made sure to immediately marginalize the term from the post-Aurora discussion, raising the question of why? Why would we so quickly decide that a carefully planned military-style attack designed for maximum media reverberation was not terrorism? Why would we make that assumption especially when police haven't even been able to enter the alleged perpetrator's apartment; that is, when we don't even know his motive? Could it be that we simply assume a well-educated white male can never be a terrorist? Or is it that while we deem some motives as a hallmark of "terrorism" (Islamic fundamentalism, for example) we assume other motives as just the hallmark of a random "madman"?

In response to my essay on Friday, some have emailed me asking why this particular assumption is so important? The answer is because there are things we've shown we are willing to do when our assumptions distinguish between events we call "terrorism" and events we just call "crime." In the name of the former, we have, for instance, supported a "no step is too far" ethos that justifies everything from invasive TSA body scans to warrantless wiretapping to due-process-free assassination. Meanwhile, the latter typically elicits a "nothing can be done" rationale to cut off any discussion -- no matter how earnest -- of even the most minimal gun-control laws. While this isn't to argue for a Patriot Act-like response to the Aurora shooting, it is to question the double standard, and ponder why, when violence is violence, we nonetheless react so differently to perceived differences in perpetrators' motives.

Speaking of guns, the Disaster Aftermath has seen fantastical assumptions pervade both sides of the issue.

For those blaming the victims for not being more heavily armed and insisting that the shooting somehow justifies even looser gun laws, the assumption is that more weapons would have either deterred the perpetrator or at least neutralized him earlier in the massacre. This line of thinking conveniently ignores a) the empirical data finding that the deterrent "effect of various right to carry laws on the incidence of public mass shootings to be negligible," b) the fact that it is, by definition, difficult to deter a deranged person who is not thinking rationally and c) that this particular shooter was wearing full body armor, meaning he was equipped to survive a gunshot. It also omits the fact that Colorado does indeed make it comparatively easy to buy firearms, and circumvents the fact that had tougher gun laws been in place -- specifically, the old assault weapons ban, which expired in 2004 -- the shooter would not have been legally able to buy an AR-15, a weapon whose rapid firing allowed him to get off so many shots in so short a time.

At the same time, those assuming that tougher gun laws could have prevented the massacre are also making a speculative jump. Even if the alleged shooter could not have purchased that AR-15 legally, who is to say he wouldn't have accomplished the same blood-soaked objectives in another way? As Hickenlooper said on CNN:

“This person, if there were no assault weapons available, if there were no this or no that, this guy’s going to find something. Right? He’s going to know how to create a bomb. Who knows where his mind would have gone. Clearly a very intelligent individual however twisted. That’s the problem, this is a human issue in some profound way."

This doesn't mean America should oppose tougher gun laws, which I believe are warranted for all sorts of good reasons that have nothing to do with this shooting (I've long supported a reinstatement of the assault weapons ban). It is only to say that the assumption that such a ban can singularly prevent now-regular mass shootings is just that: an unsubstantiated assumption that needlessly brushes other potential contributing factors (mental illness, social isolation, etc.) under the rug.

Maybe the worst assumption of all is the one that sees any discussion of these thorny topics as an opportunistic attempt to "politicize" an event.

Yes, there are certainly those who seek to utilize catastrophes for their own narrow agendas, and, sadly, in many cases we don't seem to mind that. Indeed, as Leighton Woodhouse put it, America seemed to have "no problem 'politicizing' the tragedy of 9/11 by invading Afghanistan" and Iraq. However, there's a vast difference between hijacking a tragedy for a narrow agenda, and honestly engaging in some tempered discourse about incredibly complex topics. When we assume the latter is the same as the former, we limit the possibility of healing, and we help political leaders (in this case, like President Obama and Mitt Romney) avoid answering pressing questions.

This, though, is a time for questions, tough, soul-searching questions about our leaders, our laws and, most important, our unspoken suppositions. They are painful to ask, and maybe as painful to answer. But if we once again succumb to the din of the Disaster Aftermath and don't ask them, there is little hope we will learn anything from this tragedy.