"Gangster Squad": A theater shooting in a movie. Too soon?

A trailer for a new Ryan Gosling/Sean Penn film includes an attack at the movies. Here's hoping it gets edited out 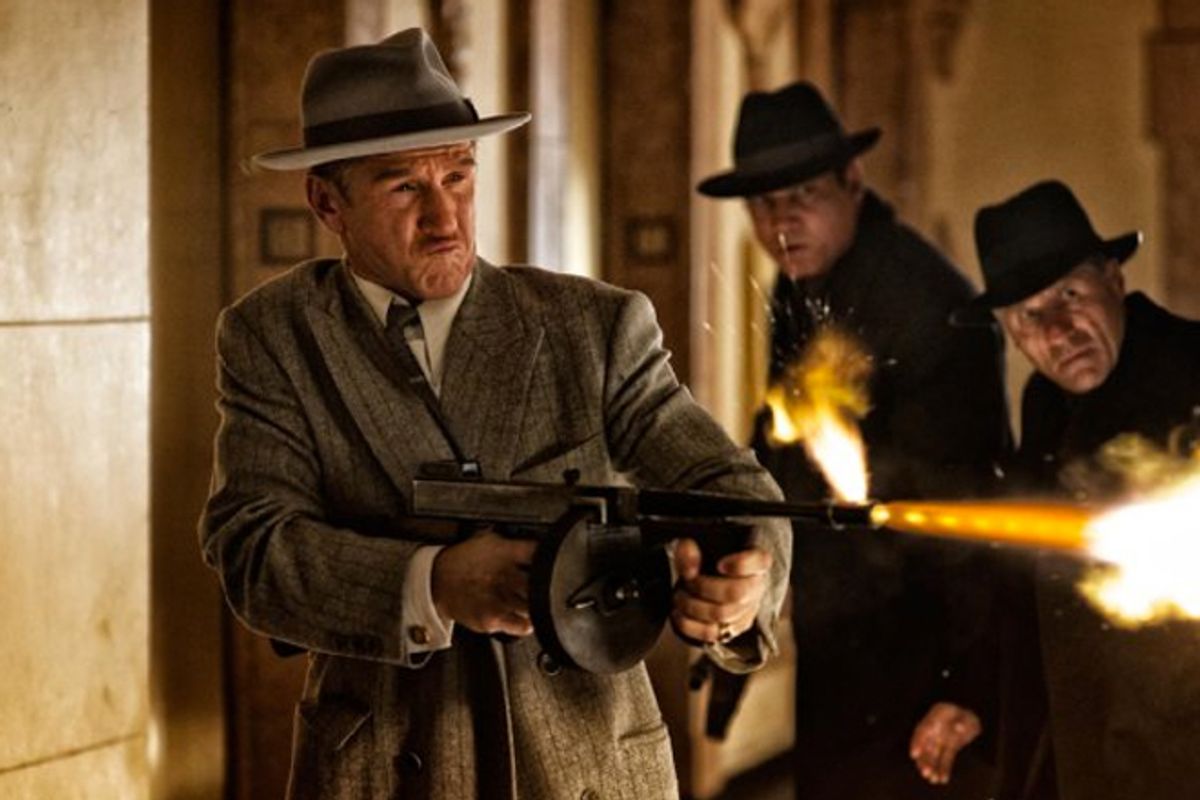 Movies are our escape. But they're also our catharsis. They're how we work through our fear and anger, how we make sense of the senseless. And in the wake of the most profoundly senseless acts, the challenge for the entertainment industry is to figure out at what point a once-innocuous scene becomes a painful reminder of a tragedy, or when an image, a reference or a word takes on unintended meaning. When terrible things happen, the question almost immediately arises: How soon is too soon?

That's the issue at hand for the upcoming film "Gangster Squad," a 1940s-era crime drama that features Ryan Gosling, Sean Penn, Emma Stone – and a scene of a squad of thugs opening fire in a crowded movie theater. The scene is featured prominently in the trailer that Warner Bros. released in May.

It's not the first movie moment of its kind. "Inglourious Basterds," after all, features a scene of horrendous movie theater carnage. And "Scream 2" features a murder at the hands of a masked killer in the midst of a pumped-up movie crowd.

But those movies didn't come out in 2012. A week ago, had you come upon that trailer while comfortably munching popcorn before the summer blockbuster of your choice, you'd simply have made a mental note of whether this was the sort of big budget, explosives-riddled flick you'd want to spend your 12 bucks on. A week ago, there were 12 more people living in the Colorado suburbs than there are today, and the word "Aurora" didn't have such a haunting connotation.

Variety reports that "Gangster Squad," which opens in September, is currently being hastily reedited to remove the scene, though the studio is not yet officially commenting on how it's handling it. (The trailer is not currently on the film's official page.)

This isn't the first time this year that a public tragedy has reframed a motion picture. One of the more unusual events to come out of the senseless and brutal death of Trayvon Martin last winter has been the renaming of a Ben Stiller comedy. Originally titled "Neighborhood Watch," the comedy, which opens this Friday, was rechristened in light of shooter George Zimmerman's self-appointed role as a neighborhood watch volunteer. Overnight, the phrase became a loaded one. It doesn't matter that in this context, it was supposed to be about a lighthearted space-alien comedy. The phrase "neighborhood watch" just can't be funny right now.

Ben Stiller, by the way, may be the Hollywood star with the longest track record of tragedy intersecting his films. Back in 2001, a shot of the New York City skyline had to be abruptly changed in "Zoolander" – which came out just two and a half weeks after the destruction of the twin towers. "Zoolander" was just one of several films and television shows that had to undergo similar swift reimaginings after 9/11. Both the poster and original trailer for "Spider-Man" had to be altered, and changes were made to "Serendipity" and "Men in Black II."

There is always the hope that a time will come when a fictional scene doesn't trigger the pain of a real-life disaster. With time, maybe a scene of gangsters blowing through a movie screen won't hurt so much. Or maybe, from now on, that image is irreparably altered. Eleven years later, I still can't see a shot of the twin towers in a movie without breaking down. I've tried. I can't. It breaks my heart every time, like it was yesterday. It's an ache that never goes away. Similarly, the idea of somebody tearing through the fantasy of moviegoing and turning it into an opportunity for destruction is no longer a clever cinematic conceit. It's something somebody really did. It's changed the experience. It's changed many of us as moviegoers. And in at least one case, it looks like it's changed a movie itself.