NRA members feel our gun laws should protect our families, not the financial interests of a clique of elites 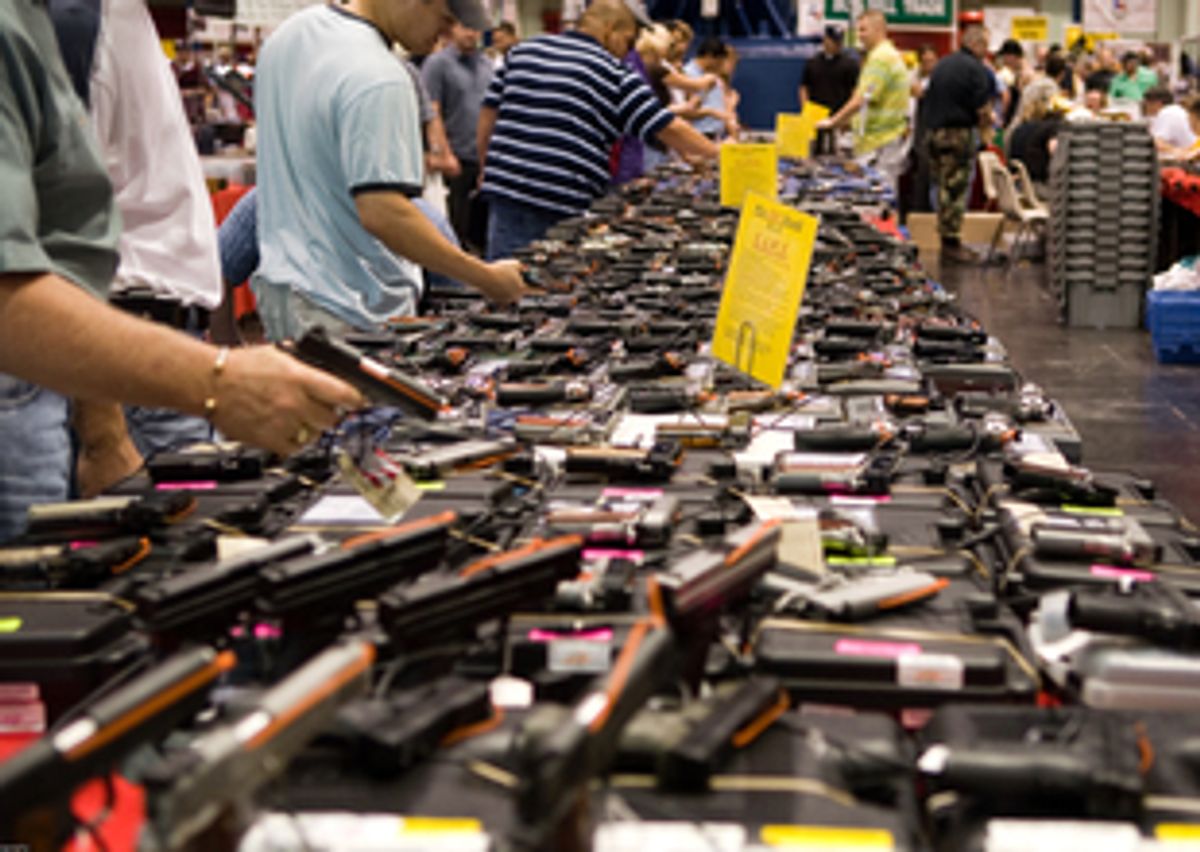 Wayne LaPierre, the executive vice-president of the National Rifle Association, is a con man. He has spent decades enriching himself, his fellow NRA executives and the organization’s board members by doing what he does best: shamelessly mainstreaming conspiracy theories that lead an increasingly paranoid subset of Americans (the percent of households owing guns has declined dramatically over the past generation) to arm themselves to the teeth, while ensuring any laws that might prevent the horrifying tragedy that occurred in Aurora, Colorado Friday morning are unable to make it through Congress.

LaPierre talks of gun confiscation being just around the corner, when he knows no such thing would ever happen in the United States. The irredeemably violent make good customers too, don't you know? So whether the NRA is working to restore gun rights to violent felons, protect the ability of terrorists, drug kingpins and serial domestic abusers to purchase high-capacity clips at gun shows, or fighting for military style weapons to be available to the Jared Loughners, John Patrick Bedells and James Holmes’ of the world, you can bet that whatever comes out of LaPierre's mouth, his only interest is protecting the real clients of today’s NRA: arms dealers.

This is made crystal-clear by the fact that the NRA’s own membership, many of whom joined only because of an outdated understanding of what the leadership of this organization actually stands for, agree with most Americans that our gun laws should protect our families, and not the financial interests of a clique of craven elites.

Here are five key issues that divide the LaPierres at the top of the NRA food chain from their 3 million (or 4 million, depending upon the press release that day) members:

Currently, in over 30 states, one can walk into a local gun show and purchase a weapon from a “private seller,” who does not have to conduct any kind of background check. For example, a .50 caliber sniper rifle, which can take down a helicopter. The NRA has fought to block any and all efforts to pass a federal law closing this infamous gun show loophole, as well as any efforts in the states. (But remember, they are anti-crime!)

Timothy McVeigh was once one of these “private sellers” on the gun-show circuit, and everyone from the Columbine killers to members of Hezbollah have obtained firearms this way. Not surprisingly, just like most other sentient beings (including 85% of gun owners not in the NRA), 69% of NRA members, when polled by conservative Republican Frank Luntz, think this loophole should be closed.

If you are put on the U.S. terror watch list you cannot board an airplane. You can, however, still purchase guns and explosives. According to the Government Accountability Office, “From February 2004 through February 2010, 1,228 individuals on the watch list underwent background checks to purchase firearms or explosives; 1,119, or 91 percent, of these transactions were approved."

NRA members understand this even if their leadership stubbornly tries to protect the gun-ownership rights of terrorists (but they’re patriots, I tell you!). Eighty-two percent of NRA members think this gap should be closed.

Named in honor of all-around clod, former Kansas Republican Congressman Todd Tiahrt, this is part of the NRA’s constant effort to hamper, harass and harangue any government effort to get to the bottom of how guns came to be used in a crime. These amendments, attached to federal spending bills, do their best to severely limit law enforcement's ability to access, use and share data that helps them enforce federal, state and local gun laws.

Not surprisingly, while these are a big hit at NRA HQ and among those members of Congress so graced with their campaign contributions, 69% of their own members have come to the logical conclusion that this is a pretty bad idea, as have 74% of non-NRA gun owners who think there should be no barriers to information-sharing between federal agencies and police when it comes to gun crimes.

Supporting provisions requiring this would seem to be only common sense. But there is not much of that present among the NRA’s leadership. For example, the NRA has not only fought all efforts to make reporting lost or stolen guns to the police a requirement, but in Pennsylvania, where scores of cities and townships have picked up the slack by passing these measures themselves, the fine Americans and conservative-lawsuit-abuse haters at the NRA have actually threatened to sue to overturn these laws. Yes, you read that correctly, our friends who love state and local rights when it comes to allowing a kid to stay on their parent's healthcare policy until they are 26, don't feel so much the same way about guns.

NRA members would seem to disagree: 78% of them think this provision would be a good idea, as do 88% of non-NRA gun owners.

The Fix Gun Checks Act, modeled on ideas developed by Mayors Against Illegal Guns, was introduced in the wake of the carnage at Tucson by, among others, Senator Chuck Schumer in March 2011. Besides closing the gun-show loophole (see #1), it also sought to fix a huge problem in the current federal background check system--a lax attitude by many states and some federal institutions in sharing records of those ineligible to buy firearms due to criminal record or mental health defects.

For example, Seung-Hui Cho, the mass murderer at Virginia Tech, had been declared mentally unfit by a judge in Virginia, and Jared Loughner had been rejected by the military for admitted drug use. Both of these men never should have been able to get anywhere near buying a gun legally. But these records were never shared.

The Fix Gun Checks Act would provide both incentives and penalties to states so that all these records are shared in as timely a manner as possible. But NRA leadership has gone to war with this bill, as with all other efforts to keep guns out of the hands of criminals and the mentally unfit. Yet, a poll of swing-state voters taken around the time the bill was introduced showed overwhelming support for this concept among gun owners. In Indiana, Ohio, Virginia, Arizona and (most ironically, and sadly) Colorado, more than 82% of gun owners believed states should be fully funded in their efforts to share these records, while 91% supported requiring federal agencies to share information on potentially dangerous persons such as Loughner.

So there you have it. Five measures, none of which would violate the very broad reading of the Second Amendment recently given by ultra-conservative Supreme Court Justice Antonin Scalia; all of which would have an immediate impact in terms of making our families safer, in a country where 34 people are murdered by guns every day--or one Virginia Tech every single day of the year.

Cliff Schecter is a public relations strategist, author and nationally syndicated columnist. He is a consultant for Mayors Against Illegal Guns.