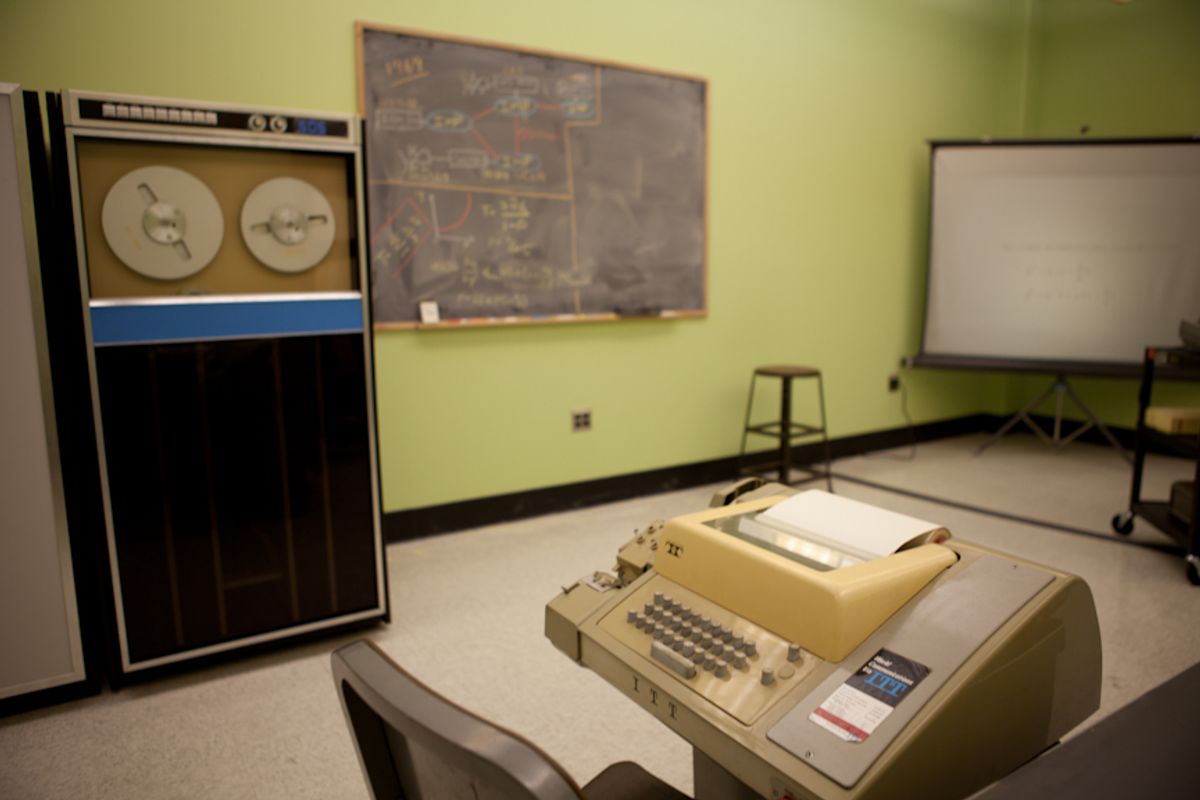 A re-creation of the first ARPANET node, installed at UCLA in 1969, at ULCA's Kleinrock Internet History Center. (UCLA)
--

Who built the Internet? A bunch of nerds, obviously, but who were those nerds working for? The traditional answer has always been "the government," specifically the Advanced Research Projects Agency (then ARPA, now DARPA) at the Department of Defense, which created the network that was the precursor to our modern internet, with contributions from people working for public universities and on government contracts.

But is that traditional answer incorrect? No. The accepted wisdom is correct. The government created the Internet. But because the Wall Street Journal is devoted to printing plausible-sounding lies designed to appeal to its anti-government readership, they printed a column by Gordon Crovitz this week claiming that the government did not invent the Internet, because governments can't invent anything useful, ever, and it was the wonderful private sector that did all the work. This "private sector created the internet" line rests on the fact that Ethernet was invented at PARC, a lab owned by Xerox.

Even if you're only vaguely familiar with the history of the Internet and the technical aspects of computer networking, you will probably recognize that Xerox developing Ethernet is not actually a stronger claim to inventing the Internet than everything ARPA (and CERN and the universities) did. (And also PARC, the Xerox lab division that invented Ethernet and pioneered lots of other personal computing tools, was staffed by a bunch of veteran government contractors, including Bob Taylor, a former government scientist, and it leased its land from Stanford and had a bunch of Stanford grad students working on its projects. And Ethernet was based on a networking system developed at the University of Hawaii.)

So, basically, the government had its grubby innovation-suppressing paws all over the creation of the Internet, a fact reinforced by Michael Hiltzik's response to Gordon Crovitz in the L.A. Times. (Hiltzik is the author of a book cited by Crovitz in his column.) Basically Crovitz got everything wrong:

Crovitz then points out that TCP/IP, the fundamental communications protocol of the Internet, was invented by Vinton Cerf (though he fails to mention Cerf's partner, Robert Kahn). He points out that Tim Berners-Lee "gets credit for hyperlinks."

Lots of problems here. Cerf and Kahn did develop TCP/IP -- on a government contract! And Berners-Lee doesn't get credit for hyperlinks--that belongs to Doug Engelbart of Stanford Research Institute, who showed them off in a legendary 1968 demo you can see here. Berners-Lee invented the World Wide Web--and he did so at CERN, a European government consortium.

And finally, Ethernet was "by no means a precursor of the Internet." So: Government created the Internet, just like we thought before. Even the ornery libertarian-leaning geeks of Slashdot concede the point.

(One more fun fact: Al Gore genuinely did have a formative role in creating the Internet! The 1991 bill that funded, among lots of other important-for-the-development-of-the-Internet things, the creation of Mosaic, the mother of all web browsers, was known as "the Gore Bill." And Mosaic was created by a government-funded unit at the public University of Illinois at Urbana-Champaign. The government invented the Internet.)

People familiar with the history of the Internet will, obviously, barely notice this attempt at partisan revisionism. But I am very confident that "The Government Had Nothing To Do With Inventing The Internet That Is a Liberal Lie" will become one of those wonderful myths that all true-believer conservatives subscribe to, like "FDR and the New Deal made the Depression worse" and "Reagan Was a Good President." You'll be seeing this one pop up -- as common knowledge, probably -- in Corner posts and Fox News hits for years to come. When some random idiot Republican candidate in 2014 or 2016 makes the rounds on the blogs for claiming that the private sector invented in the Internet, just remember that it all started right here, in the Wall Street Journal.

UPDATE: Oh, lord. Two minutes after publishing I see that Fox's John Stossel is on board with the new narrative!