"American Idol" snags the '90s diva as a judge for the new season. Paging Celine Dion -- someone has a job for you 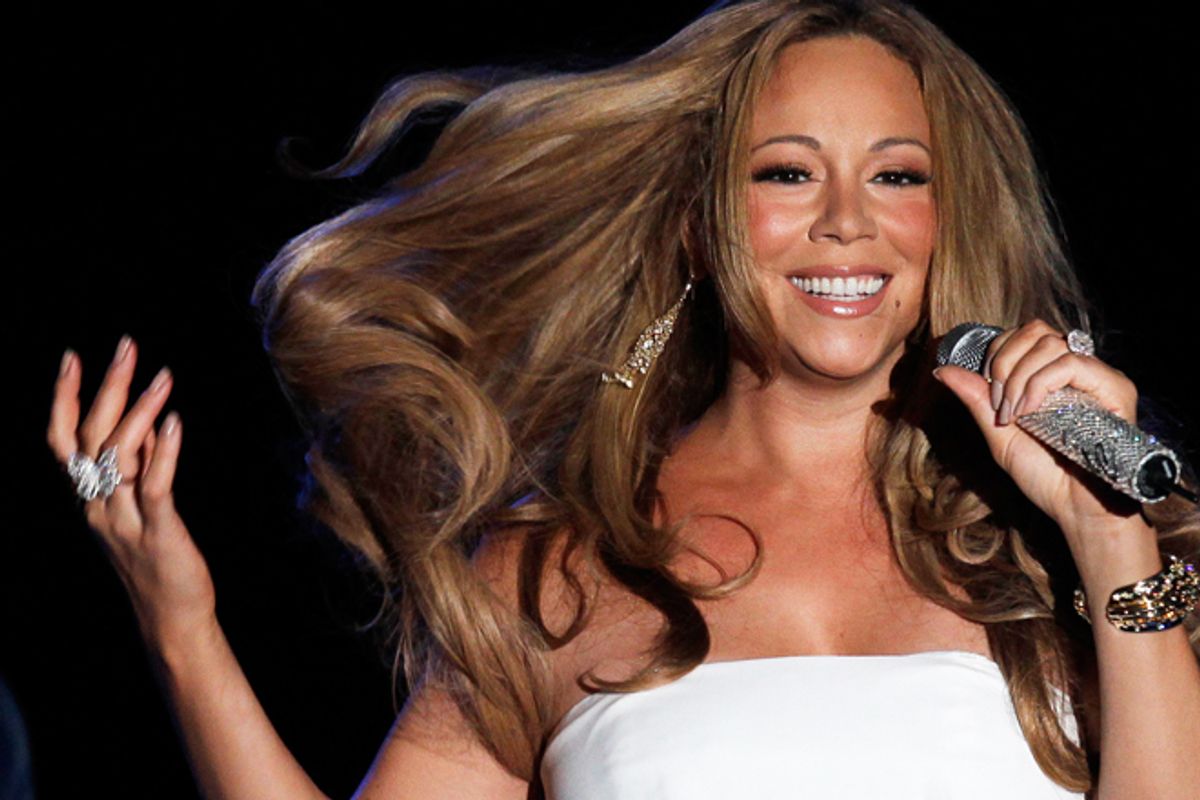 Once upon a time, a whole decade ago, all “American Idol” needed to be the biggest show in the land was a genuinely critical judge, some talented, green performers desperately in need of a makeover, and an MC to smooth over the rough edges. But as “Idol” gears up for its 12th season, facing depressed ratings and stiff competition for attention and buzz from “The Voice” and “The X Factor,” those simpler requirements no longer suffice. Thus, the singing competition shows are engaging in an arms race for famous ladies. (Celine Dion, you’re missing out on Scrooge McDuck piles of cash.) Yesterday, Fox officially announced that Mariah Carey, she of the eight-octave range, will be replacing Jennifer Lopez on “Idol.” This confirmation comes a week after Aretha Franklin expressed interest in joining the series. Meanwhile, at a panel for the Television Critics Association press tour also held yesterday, Britney Spears was trotted out to nervously answer questions about appearing on a rebooted “X Factor.”

By incorporating these famous women, the singing competition shows are following larger reality TV trends. A format that started out by focusing on regular people made interesting by their context — “Real World,” “Survivor,” “The Apprentice” — has long since trained its eye on the daily routines of famous-ish people — “Dancing With the Stars,” “Ice Loves Coco,” “Tori & Dean,” etc., etc. — and people made famous-ish by other reality shows — “Bethenny Ever After,” “The Kardashians," “Big Ang,” “Bachelor Pad,” MTV’s endless challenges, etc., etc. If “Idol” was once a show that made regular people famous — Kelly Clarkson, Carrie Underwood, Clay Aiken — after churning out five unmemorable white dude winners, it has fallen back on the more reliable ratings-grabbing strategy of making famous people more famous. (And I wouldn't be at all surprised to see an all-star version of "Idol," featuring previous contestants, fast approaching.)

The last two seasons of “Idol” are more memorable for boosting J-Lo’s career and establishing Steven Tyler as a sleazy grandpa type who loves shimmering scarves than anything that happened onstage. But thanks to these two the show did not collapse in the wake of Simon Cowell's departure.  The first season of "X Factor" tried to go the old-school route by hiring not-that-famous judges (Simon Cowell was joined by L.A. Reid, Paula Abdul and the useless Nicole Scherzinger), and the show wasn't nearly as big as Cowell or Fox had been hoping. For the new season, Cowell has brought on Spears, ensuring that its second season will be more of a referendum on her mental health than on any of the amateur performers. With Mariah and Britney onboard, the ratings for both shows may go up, but they might as well call themselves what they are, "American Idol: The Mariah Carey Hour" and "X-Factor: The Britney Spears Experience."