Do NRA leaders, like CEO Wayne LaPierre, believe their own dire prophecies? Their political donations suggest not 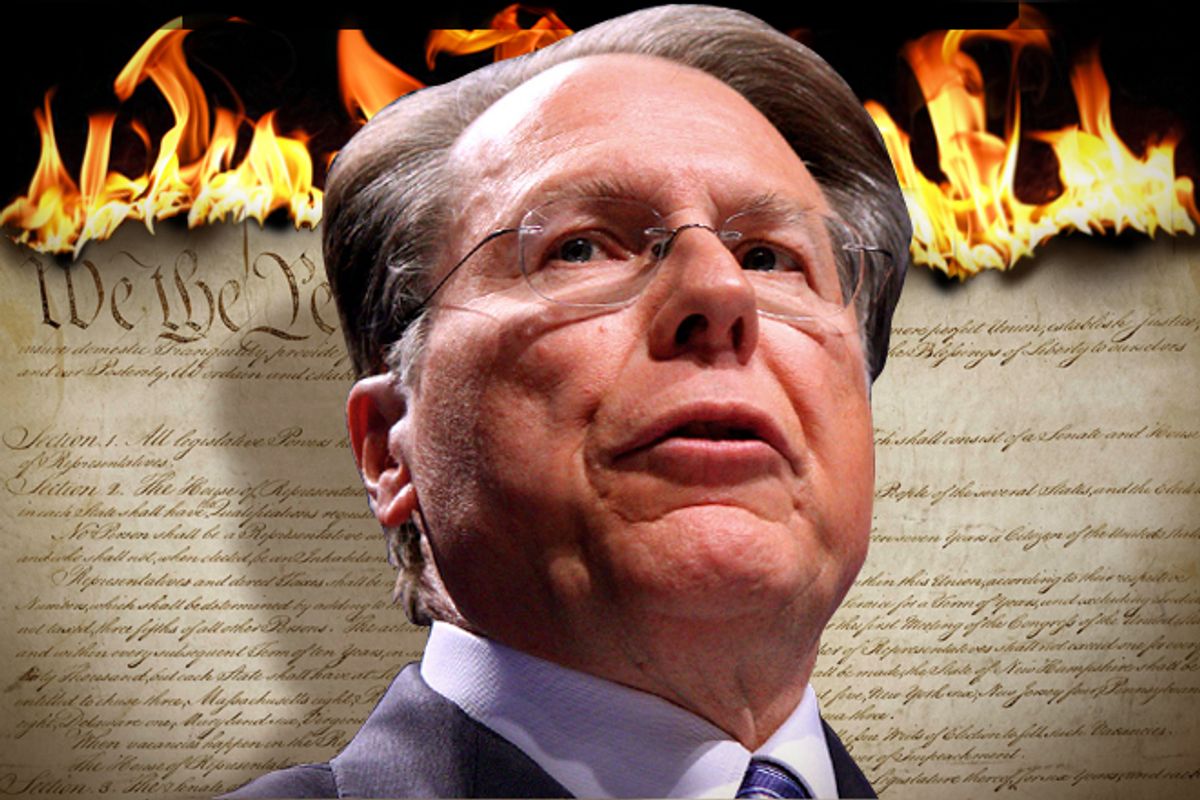 This is Part 2 in a three-part series on the NRA's influence in the United States. Read Part 1 here.

If Americans wake up one day to find out that they're living in a Stalinist police state and that government agents have confiscated all their guns leaving them utterly defenseless, it won't be because Wayne LaPierre didn't warn us. LaPierre, the CEO of the National Rifle Association, has been issuing warnings along these lines for most of his 20 years as the public face of what is regularly described as the nation's most powerful lobbying organization.

LaPierre is, of course, a perennial doomsayer with a nearly unblemished record of wrongful predictions, a record so reliably unreliable that, were it possible to bet against it, one could easily amass a sizable fortune. During the Clinton administration he claimed that a document "secretly delivered" to him revealed that "the full-scale war [to] eliminate private firearms ownership completely and forever" was "well underway." Yet a decade later Second Amendment rights are stronger than at any time in modern history, and law-abiding Americans are in about as much danger of having their 300 million guns seized by the federal government as by Lord Voldemort.

Four years ago LaPierre dusted off and embellished his Clinton-era prediction, arguing that if Barack Obama were elected, Rush Limbaugh, Glenn Beck, Laura Ingraham and Sean Hannity would be silenced, and "civil disarmament" would be implemented through a United Nations gun-ban treaty. Needless to say, that didn't happen, but LaPierre now says it's only because Obama and his advisers decided prior to his election to forgo implementation of the dastardly plan and instead "hatched a conspiracy of public deception to guarantee his re-election in 2012." According to LaPierre, Obama still plans to "erase the Second Amendment from the Bill of Rights and exorcise it from the U.S. Constitution" in a second term, when he will turn "American's guns into international soup cans and park benches." Exactly when that will transpire, and whether Obama will repeal the Second Amendment with a two-thirds vote of the Senate or simply forgo that constitutional formality and resort to extralegal means, remains unclear. LaPierre only says that Obama is "just waiting for the moment to strike."

The only way to avert this calamity, the NRA's 4 million members are told in daily email alerts, the organization’s various magazines and regular fundraising appeals, is if they all dig deep into their pockets and send money to the NRA. "This is the most dangerous election of our lifetime," screams the April cover of America's First Freedom, the NRA's flagship publication, showing a stern, pinch-lipped LaPierre. The battle cry for this year's campaign to defeat Obama is "All In," a poker metaphor designed to convey the idea that the stakes couldn't be higher. This election, LaPierre wrote in First Freedom, "will decide whether Americans remain free" and, "That's why NRA is 'All In' for the 2012 election, and why you must be 'All In' with the NRA."

But the "all" in "all in" apparently doesn't include LaPierre or any of the NRA's other top executives. In fact, when it comes to putting his money "in," LaPierre, who earns nearly $1 million a year at the NRA, invariably folds his cards. During his 20 years as NRA CEO, LaPierre's name hasn't shown up once in government reports of  contributors to NRA political action committees. (The Federal Election Commission requires public reporting of all contributions of $200 or more.) In 2003, when the organization was $100 million in the red and LaPierre was pleading with members to donate to a "war chest" to deal with a "full-blown legislative assault" by "gun banners," he himself donated nothing to the NRA's Political Victory Fund, the group's political action committee. He again gave nothing to the PAC in the 2008 election, despite  his claim that Obama would confiscate hunting rifles and "ban use of firearms for home defense" (a charge Politifact.com labeled "intentionally dishonest").  LaPierre, who has signed off on scores of fundraising appeals to NRA members to help defeat "gun-hating politicians" and elect lawmakers endorsed by the NRA, has also elected not to contribute to those campaigns. His last contribution to an NRA-backed candidate was a whopping $500 back in 2002.

The current election may, in LaPierre's words, "literally be a struggle for the survival of freedom in America," but he'd apparently rather take that risk than cut a check. And he's not alone. Other top NRA executives have also chosen not to put their money in, according to Federal Election Commission records going back to 1990 available at OpenSecrets.org. Executive director for general operations Kayne Robinson, another million-dollar-a-year man and a former NRA president, has never contributed to the Political Victory Fund -- or not enough to register with the FEC in the past 22 years. Others who have no chips on the table in this supposedly critical election year for gun owners -- and have never given to the PVF  -- include NRA president David Keene, the NRA's first vice-president, second vice-president, secretary, treasurer, chief of staff, managing director and membership director. In fact, among the NRA's current top officers, the only one who has ever contributed to the PVF is the PAC's own chairman, Chris Cox. Cox has made two contributions totaling $2,000 since joining the NRA in 2002, both in 2008.

The lack of enthusiasm for the NRA PAC also extends to its 76 current directors, and 29 lobbyists, only one of whom, other than Cox, donated to the PVF. Among the directors, only two ever donated. The most recent gift, $500, was in 2006.

Most notable are the NRA directors who have never contributed to the PVF, among them three former NRA presidents, Ronald Schmeits, Harlon Carter and Marion Hammer; Fox News analyst Oliver North; executives with some of the country's leading firearms manufacturers; and loudmouth rock star and NRA darling Ted Nugent, who has called President Obama "a piece of shit," Secretary of State Hillary Clinton a "worthless bitch," Sen. Dianne Feinstein a "worthless whore" and Nancy Pelosi "a sub-human scoundrel."

Now, it is theoretically possible that LaPierre and other NRA executives all make fat contributions to the lobby's general fund so they can remain anonymous. But it would be hard to understand why they would all want to hide their association with the NRA rather than boast about it -- and that they would have done this with such unanimity and consistency over the past two decades. Furthermore, given that NRA directors have written dozens, in some cases hundreds of checks to other reportable political causes, the idea that they would be hiding only their gifts to the NRA seems highly implausible.

From all of the empirical evidence, it seems fair to conclude that the NRA's big thinkers and chief proselytizers have instead concluded that the existential task of financing the NRA's political and legislative agenda  -- to say nothing of literally saving civilization as we know it -- is strictly for the squares, that these missions are best left to the little guys among NRA members who actually believe LaPierre's alarmist forecasts.

Former NRA lobbyist Richard Feldman has suggested one reason NRA big shots are happy to sit on their wallets. In his book “Richochet: Confessions of a Gun Lobbyist,” Feldman calls the NRA a "cynical, mercenary political cult ... obsessed with wielding power while relentlessly squeezing contributions from its members." According to Feldman, NRA leaders "weren't interested in actually solving problems, only in fueling perpetual crisis and controversy" because "that was how they made their money."

Its executives, directors and lobbyists may not be interested in personally financing the lobby, but they like the perks and the bills have to be paid. Their job is to keep the fear pedal pressed firmly to the floor at all times and make sure the dollars roll in.

Lucky for them, along came Obama who, tarred and feathered in the cloak of Armageddon, has proved an invaluable asset, not just for the NRA but for the firearms industry at large. Today gun show advertisements regularly parrot LaPierre's claim that Obama wants to confiscate everybody's guns, warning Americans to "GET THEM WHILE YOU CAN!" According to the FBI, 2.9 million firearms were sold in the United States during the two months following Obama's election. In 2009, 14 million guns were sold in the U.S., an all-time annual record. "To put it in perspective," a euphoric Ammoland Shooting Sports News crowed, "that is more guns than the combined active armies of the top 21 countries in the world." Ammoland estimated that at least 14 billion rounds of ammunition had been sold the same year, and ammunition shortages were widely reported. Outdoor Wire, a gun industry website, named Obama its "Gun Salesman of the Year."  "For me," editor Jim Shepherd told the Washington Times, "it was a simple fact of recognizing that without [Obama] frightening consumers into action, the firearms industry might be suffering the same sort of business slumps that have befallen the automotive and housing industries." In February, Ammo.net, an online ammunition retailer, called Obama "the greatest gun salesman in America," and posted a series of charts showing increases in gun and ammunition sales, concealed carry permits, hunting licenses and background checks since he took office. "Ironically, the perceived hostility toward gun owners by President Obama has actually helped the firearms industry tremendously," the gun seller concluded, suggesting that the industry might consider supporting Obama for a second term.

There is, however, another equally plausible reason the NRA's top leadership fails to put its money where its mouth is, which is simply that the keepers of the faith know better than anyone that the premonitions of doom, and all the claims about the precarious state of the Second Amendment and the fragile state of American democracy are unreconstructed nonsense.

As I'll discuss in Part 3 of this series, the evidence that these executives don't believe their own carefully honed propaganda is nothing less than overwhelming.