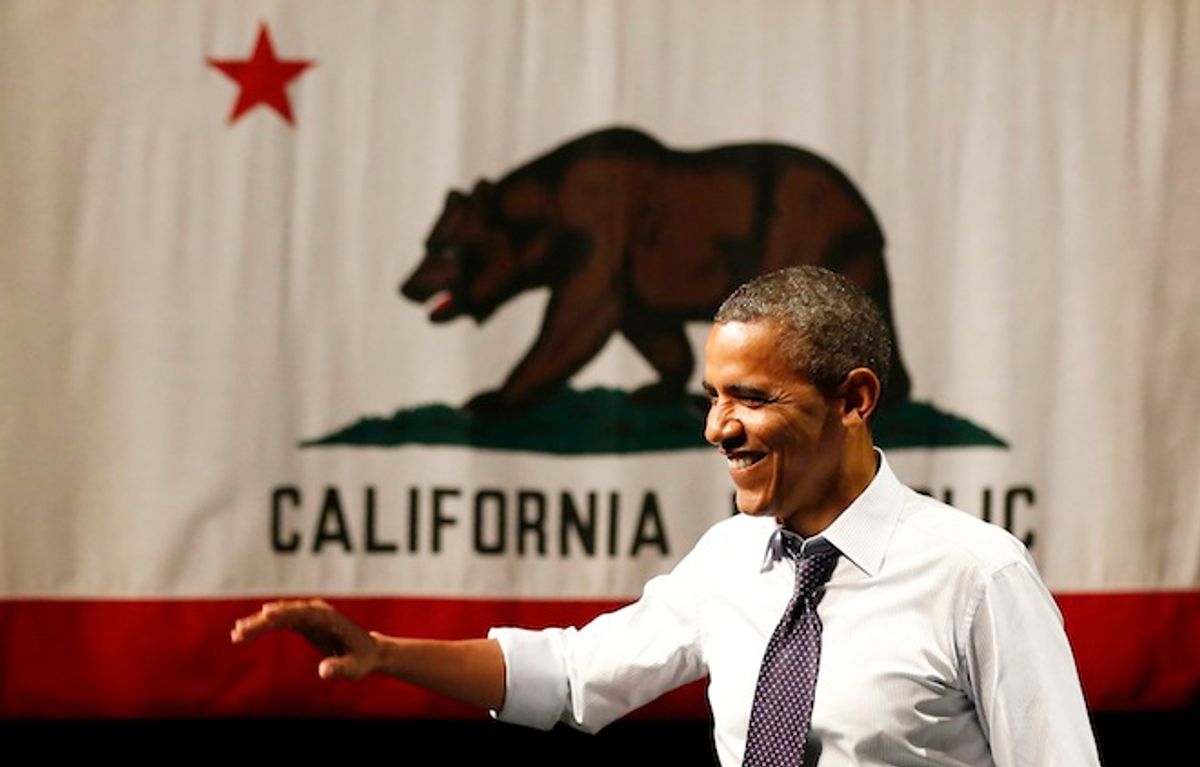 U.S. President Barack Obama waves before he speaks at a campaign event at the Fox Theatre Oakland in Oakland, July 23, 2012. (Reuters/Larry Downing)
--

President Obama tore into Mitt Romney with special zeal Monday night, at a packed Oakland, Calif., fundraiser whose political fire palpably restored his own. Obama got tougher as the speech went on, hitting Romney at length for distorting his comments on business owners, and jabbing back, saying it's Romney who "doesn't understand what it takes to succeed."

Obama attacked his opponent by name. "Gov. Romney was at it again today, [saying] I don't value small business. I believe in the drive and ingenuity of people that start businesses. That's what makes our economy the envy of the world." Then he ran down the government supports that make successful businesses possible, from public education to road-building, to "publicly funded research and development" that helped create the Internet, as well as the government-enabled "strong and growing middle class that can buy the products they're selling."

That led to his counterpunch that it's Romney who "doesn't understand what it takes to succeed." The president's build-up sounded strangely defensive, before it became clear that he was having at Romney with the same words Romney used to describe him.

Outside hundreds of protesters thronged on various corners attacking Obama's stands on medical marijuana, drones, war and civil liberties. An early rally drew hundreds to support the city's thriving cannabis community and oppose the federal crackdown on medical marijuana, after Obama pledged in 2008 to leave it alone. (Oakland's famed "Oaksterdam University" stands across the street from Fox Theater,  and just a couple of doors down from the local Obama campaign headquarters, just for irony.)

In a city where as many citizens died of gunshots last month as in the Aurora massacre (and even more are wounded monthly), I didn't notice any gun control protesters, despite the president's failure to push for tougher gun laws. I'll admit I didn't have a lot of time to canvass the crowd, since the media rules required we get inside a full two hours before the president's appearance. (More on that later.)

But inside the Fox Theater, the crowd was a happy microcosm of the Obama coalition, multiracial, gay and straight, fairly young for a fundraiser. Their frequent interruptions weren't to protest, as in other Obama visits, but to egg the tired president on. Introducing Obama, Rep. Barbara Lee noted it was his first visit to Oakland, a minor sore spot in a city with a storied African-American history. But all was forgiven when he came onstage to cheers and had to quiet the crowd. Obama ran through what's becoming his standard stump speech, talking about how, in the Americans he's met on the campaign trail over the years, he sees his family: his World War II vet grandfather and his "Rosie the Riveter" grandmother; his single mother who struggled to get an education and provide one to her kids; and Michelle Obama's family, Frasier and Marian Robinson, working-class parents who sent their children to the Ivy League.

"As different as folks seemed on the surface," he said of his campaign-stop crowds, "they all shared the belief that's at the core of the American experience: America is a place where you can make it if you try … This core American dream is at risk." Obama walks a politically tricky line these days, in which he talks of America's greatness but acknowledges some diminishing of the dream. In Oakland, at least, helped by a crowd that nodded and cheered him along, he pulled off the balance between optimism and realism, boosterism and tough-truth telling.

I haven't seen the president in person since the 2008 campaign trail (you can't count Inauguration Day). He's thinner and grayer and more tired. I winced at the phalanx of Secret Service agents who surged around him, a reminder of his vulnerability, as he waded into the crowd, to Bruce Springsteen's surging anti-anthem, "We Take Care of Our Own." Springsteen fans debate the song's meaning, and it's clear the singer is indicting a society that abandons people "from the shotgun shack to the Superdome." But I'm not sure the mixed-message song is wrong for the campaign, even if you hear it as "we don't take care of our own" ... anymore. The president seems willing to acknowledge we don't always take care of one another, but to remind us of the times that we did, to make sure that we do it again.

On the press arrangements for the event: I hate when privileged reporters complain about their treatment, so I hate myself right now, but I can't resist. I understand why, for security reasons, the media have to show up early. I traded my ability to cover the protests outside in order to cover the president. My choice. But once inside, reporters were confined to a small room and kept away from the vibrant crowd a door away. We could hear gospel music and jazz and cheering, and the sounds of a roaring good party, but we couldn't witness it. Why we couldn't have at least stood in the theater, if not mingled with the joyous crowd and actually talked to real live people who love the president, is one of those campaign-genius mysteries that is beyond me.

When I left the Fox Theater the protesters had mostly dispersed. Giddy people posed for pictures in front of the gorgeous marquee announcing the president's starring role. As I walked back to the car, I was behind an older black woman practically skipping down the street holding hands with her grinning blond granddaughter. It turned out to be former Oakland school board president Toni Cook, who paid $100 a ticket to bring her granddaughter Sydney Cook-Jeffress to see the president. "She'll never forget," Cook said. They passed by a man with a pit bull puppy holding a sign that read "Obama = Bush," who screamed at happy Obama backers over and over, "How dare you support that murderer!" Unabashed Obama supporters chanted back "Four more years!" as they walked away.