Prison for enabler of "monsters in clerical garb"

A judge blasts Msgr. William Lynn, the first American Catholic official to be jailed for covering up sexual abuse 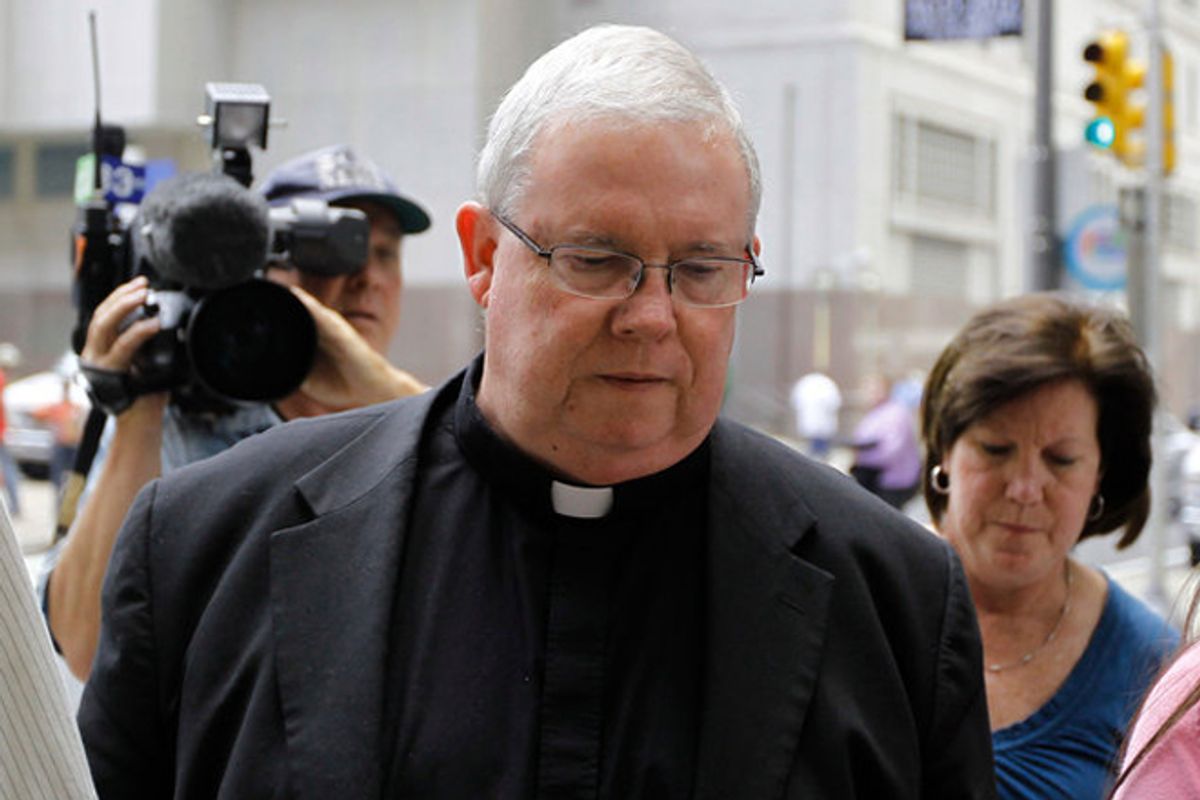 Sexual abuse isn't always a solitary act. There is, too often, a culture of complicity around it, one in which concerns for the welfare of children are trumped by the cowardice of the adults around them.

Yet in recent days, we have finally – finally! – begun to see change. We have seen it in the damning and decisive revelations of the Freeh Report at Penn State, which condemned "the total disregard for the safety and welfare of [Jerry] Sandusky’s child victims by the most senior leaders ... in order to avoid the consequences of bad publicity." We have heard it in the NCAA's statement on Penn State's "reckless and callous disregard for the children."

And now, after far too many years of horrifying revelations, lawsuits and clearly documented cases of coverups of sexual abuse within the American Catholic Church, Philadelphia's Monsignor William J. Lynn -- who has the distinction of being the first American Catholic official convicted of covering up the sexual abuse perpetuated by priests under his supervision -- has been sentenced. What took so long? On Tuesday morning, the 61-year-old Lynn was sentenced to a minimum of three and as many as six years in prison for his conviction on child endangerment. The conviction and sentencing stem from his handling of the former Father Edward Avery, who was returned to parish work after Lynn declared him guilty of "sexual misconduct with a minor" -- and who went on to sexually assault a 10-year-old altar boy.

In a statement on Catholics for Change, Robert Fisher, who came forward to Monsignor Lynn back in 1992, said, "I stressed in my communications with Msgr Lynn that I felt that Edward Avery might offend again. I conveyed the great difficulties that the abuse was causing me in my life. I never received the acknowledgment or validation from him confirming what I had experienced." And because of that, "for one little boy at St Jerome’s, everything changed. Msgr Lynn had all the information he needed to save this young man from a lifetime of pain, instead he made a series of choices to maintain an evil status quo. At the end of the day that is what this all boils down to – a young boy was raped and those who could have prevented it had other priorities."

During his trial, prosecutors depicted Lynn as a man whose behavior was "off the charts." At his sentencing, Judge M. Teresa Sarmina referred to him as a man who enabled "monsters in clerical garb ... to destroy the souls of children, to whom you turned a hard heart" over the dozen years he was in charge of managing priests' assignments and investigating sex abuse charges. But Lynn insisted he had been stymied by a church hierarchy that held the ultimate power to remove and discipline predatory priests. His defense team insisted that a lengthy prison term would be "cruel and unusual," and "serve no purpose at all."

That Lynn was working in a fantastically self-serving, dysfunctional, mind-bogglingly callous system is beyond all doubt. If you believe in a God, there are a whole lot of other guys in black dresses across the Catholic Church who are going to have a lot to answer for. But as screwed up as the entire Vatican-based workplace may have been back in Monsignor Lynn's heyday of 1992-2004, however hot a mess it remains, however ignorant entire generations of leaders may have been of the nature of sexual abuse and how to deal with it, it boils down to a few very simple facts. As Judge Sarmina said Tuesday, "It's not that hard to be good when you don't have to make the tough choices that challenge your values to the core."

Monsignor Lynn looked away from a problem when he should have been giving it the full force of his vision. He was silent when he should have been shouting from the rooftops. He avoided when he should have gone in. He was weak. And apathy and inaction and fear of retribution, in the end, can wreak as much havoc as the despicable crimes themselves. There is a direct line flowing from Lynn's choices to the molestation of a little boy. A minimum of three years in jail? I'd say that's a good start. It sends a message to everyone else who's ever been more concerned about the reputation of an institution than the welfare of a human being. It says, to hell with anything else you accomplished in your life that was decent and meaningful. You don't get a statue. You don't get a peaceful retirement. You were complicit in the rape of children. That's your legacy. And here's your justice.