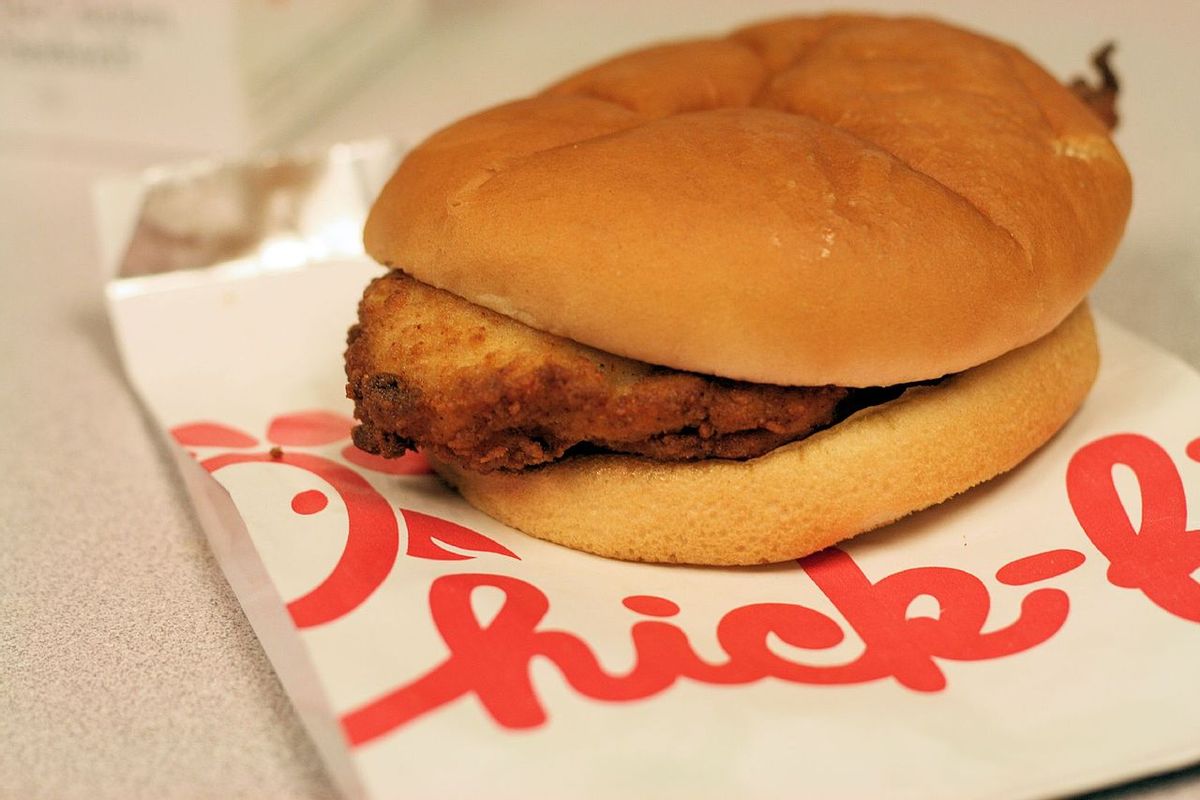 For all the Oreo Cookies out there – companies that support gay rights, if only because doing so is good for business – there are plenty of food companies that have not come around on progressive social issues. In fact, a number of food companies are owned by far right-wingers who’ve spent significant money opposing gay rights, abortion rights, and other important causes and funding attack ads against left-leaning politicians.

The companies in question include many popular chain restaurants that you may eat at occasionally, or even all the time. It’s wise to know where your dining dollars are going.

To that end, here are five food chains that are helmed by owners who support right-wing politics.

It won’t be news to many readers that Chick-fil-A’s owner is deeply entrenched in conservative politics and social issues. The chain has been in the news many a time for its owner’s anti-gay attitudes, in particular.

The latest Chick-fil-A hubbub has been especially high-profile. Chain president Dan Cathy, who is the son of Chick-fil-A founder S. Truett Cathy, said in a recent interview with the Baptist Press that “as an organization we can operate on biblical principles.” Asked about the company’s support of the "traditional family,” Cathy answered, “Well, guilty as charged....We are very much supportive of the family -- the biblical definition of the family unit....We know that it might not be popular with everyone, but thank the Lord, we live in a country where we can share our values and operate on biblical principles.”

Though Chick-fil-A’s attitudes were no secret, this was a bold statement. Unsurprisingly, a strong backlash led by gay rights supporters has ensued. (Meanwhile, the anti-gay side has been vocal in its support of the company.)

In response to the controversy, the company didn’t apologize, but it did spotlight its employee nondiscrimination policy and said that from now on it will “leave the policy debate over same-sex marriage to the government and political arena.”

Carl’s Jr. founder Carl Karcher, who died in 2008, had been a supporter of anti-abortion causes for decades. In particular, Karcher was fond of funding the anti-choice group Operation Rescue. He also had a mean anti-gay streak as well. From the AP story that followed his death:

He was reviled by abortion rights activists for his contributions to anti-abortion groups and his oft-repeated story about talking a Carl's Jr. employee out of an abortion. Gay rights groups dubbed his hamburgers "bigot burgers" after Karcher supported a 1978 proposition that would have allowed school boards to fire teachers who were gay or advocated homosexuality.

Like Karcher, Domino’s Pizza founder Tom Monaghan is an unapologetic supporter of anti-choice groups, including Operation Rescue, Right to Life, Priests for Life, and the Committee to End State-Funded Abortion in Michigan. (Domino’s itself has noted that it does not, as a company, support “either side of the reproductive rights issue.”)

Monaghan is a devout Catholic who also founded Ave Maria University. It’s said that he was inspired by a visit to the Vatican in the 1980s to found the Ave Maria List, an anti-choice PAC.

White Castle joins Carl’s Jr. on the list of beloved burger joints with right-wing ties. According to a recent ThinkProgress report about companies that have helped bankroll right-wing attack ads, White Castle has given $25,000 to the Congressional Leadership Fund super PAC, a group linked to House Speaker John Boehner that is supporting conservative candidates in the November election.

Waffle House (or Awful House as I used to call it growing up) is also mentioned in the ThinkProgress report. The breakfast joint has given $100,000 this election cycle to the Karl Rove super PAC American Crossroads. Mother Jones’ Tim Murphy reported on the donation:

This is surprising because one doesn't normally associate Big Waffle with big scary super-PACs, but also not that surprising: CEO Jim Rogers Jr. is a longtime supporter of Republican causes, and the company's political action committee has given exclusively to Republicans (in considerably more modest quantities). His ties to Romney date back to 2006, when he joined the finance team of Romney's political action committee, Commonwealth PAC.

So there you have it. The next time you go out to eat at one of the above restaurants, know that your burger and waffle dollars might eventually end up funding anti-gay, anti-choice or other conservative causes.

Lauren Kelley is the activism and gender editor at AlterNet and a freelance journalist based in New York City. Her work has appeared in Salon, Time Out New York, the L Magazine, and other publications. Follow her on Twitter.