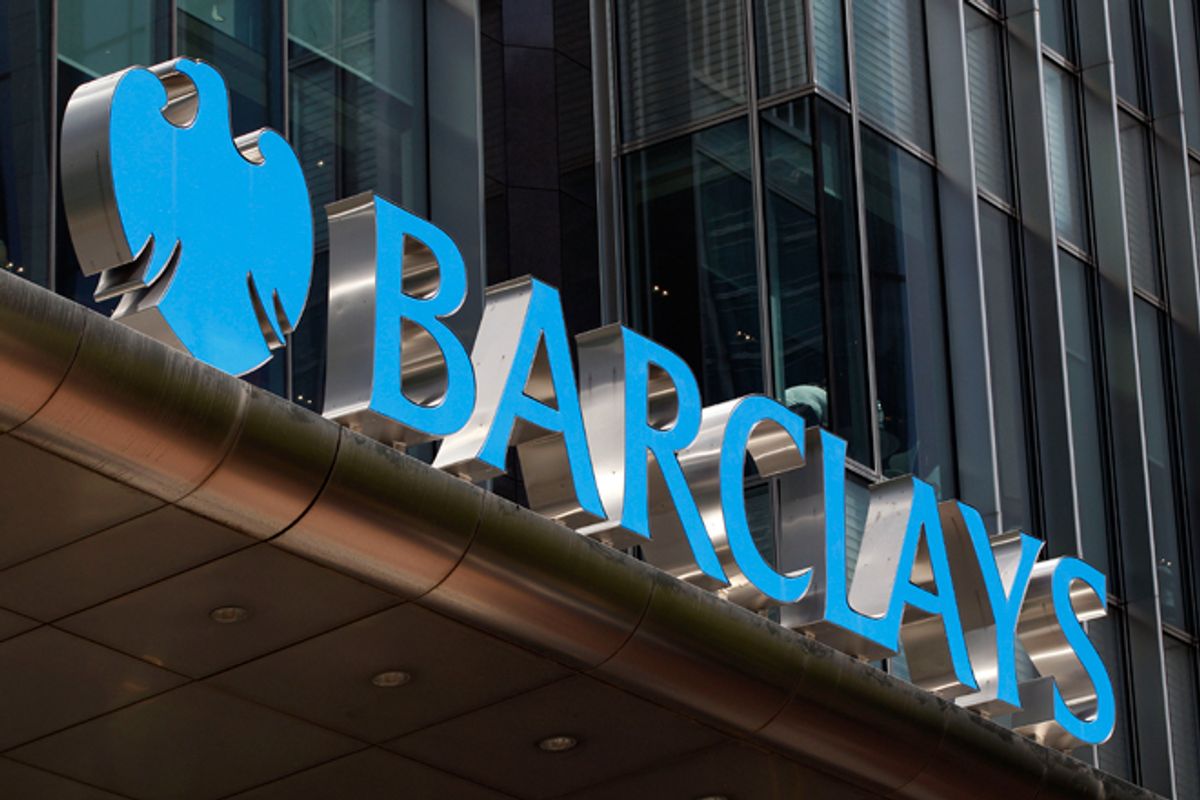 Facebook
Twitter
Reddit
Email
view in app
Seeing Barclays and other global banks rig interest rates on an estimated $800 trillion worth of municipal bonds, corporate loans, adjustable rate mortgages, car loans, credit card payments, credit default swaps and other derivatives should give us a clue: We can’t trust the jerks. But the rot goes far beyond the destruction of trust, as damaging as that is. According to legal findings by the U.S. Commodity Futures Trading Commission and the U.K.’s Financial Services Administration, the wrongdoing extended to nothing less than criminal conspiracies within Barclays and between it and its competitors, all on a global scale.

This is the story the initial documents tell, though the media have somehow managed to blur it. What the docs do not tell could have even greater impact. At present, central banks and assorted regulatory agencies from Wall Street and Washington to Tokyo, Zurich, Frankfurt, Brussels and the City of London are reportedly investigating as many as 20 financial supermarkets. They include JPMorgan Chase, Citigroup, Bank of America, HSBC, Deutsche Bank and Société Générale, all of which are too big to jail or let fail. Against all this Big Money, the nagging unknown becomes obvious: How hard will the normally light-touch regulators push their investigations? How far will they risk digging into the systemic corruption that developed on their watch?

Complicating their decision, the reluctant regulators themselves played a key role in the wrongdoing, as we shall see, and they did so at least in part to help keep global markets calm. Uncovering truth and upholding law were never their motivating concern. If they now continue to have their way, we can hardly expect them to do more than bring charges against a few “rogue traders,” find new benchmarks to replace the badly flawed London interbank offered rate (Libor), and issue a laundry list of inadequate reforms “to curb a culture of greed” in the commanding heights of financial capitalism.

But don’t despair: The story could take an unexpected turn. Regulators might not have their way. Civil suits and possible state prosecutions threaten their ability to define and contain the scandal. Many in the financial media are now doing what journalists should do, which is to keep digging into the story wherever it leads. And, sticking my neck out, I suspect that the scandal’s in-your-face criminality will end up undermining faith in our Wall Street-dominated economic system even more than did the infinitely complex financial crash of 2008.

So, with all this in play, what in the rapidly expanding scandal looks most important? Three major themes stand out.

First, Barclays did not act alone. Though the initial legal findings focused on the London and Wall Street giant, they made clear that it acted in concert with its competitors. The U.K. documents describe how “Trader E” repeatedly asked Barclays officials to fudge the estimated interest rates they submitted for Libor, the Euro-based Euribor, and other widely used benchmarks. The Financial Times subsequently identified Trader E as Philippe Moryoussef, a Moroccan who had earlier traded interest-rate derivatives for Société Générale in Paris and currently appears targeted “as a key member of a ring of traders” that spearheaded the rigging.

At Barclays from May 2005 to August 2007, Moryoussef requested Barclays submitters to nudge the benchmarks up or down depending on the positions he held in credit swaps. In a variant of “casino capitalism” that gets rid of the gambling, he regularly bet billions of the bank’s money on where the Libor or Euribor benchmark would be on a specific date and was looking to remove any risk. On various occasions, he extended his requests to traders at at least five other banks on the Euribor panel, and passed requests from traders at other banks to the submitters at Barclays. Nor was he alone. According to the Financial Services Association, five derivatives traders at Barclays made “at least 63 requests” to other banks to falsify Libor and Euribor submissions between February 2006 and October 2007.

Reuters and the Wall Street Journal are now predicting the imminent arrest of individual traders, and Moryoussef will likely be among those facing charges.

Second, the derivatives traders did not act as rogues. Like other major multiservice banks, Barclays claims to have “a Chinese firewall” separating its derivatives traders from other operations. But the FSA has identified at least 14 senior and junior derivatives traders at Barclays who breached the firewall by “regularly and routinely” emailing or otherwise contacting the bank officials who submitted the benchmark estimates and asking them to fudge their submissions. Most often, the submitters complied. In one batch of 111 requests that the FSA studied, some 70 percent of the submissions proved consistent with the requests, another 16 percent were unclear and only 14 percent were inconsistent. Other requests produced consistent submissions as high as 86 percent of the time.

Even more damning, senior management at Barclays knew that the submitters were fudging their estimate to meet the traders’ requests. The managers offered no objections and some of them had to approve paying the traders in the millions of dollars for their successful and risk-free bets. Later, during the financial crisis of 2008 and after, high-ranking senior managers themselves requested the submitters to lower their Libor and Euribor estimates to make Barclays appear financially stronger than it was.

Third, financial regulators were part of the problem, not part of the solution. As president of the New York Federal Reserve, Timothy Geithner learned some of this from insiders at Barclays as early as 2007 and claims to have brought the matter to the Commodity Futures Trading Commission, which pursued the investigation, forced Barclays to accept a multimillion-dollar civil settlement, and referred the case to the Justice Department for criminal investigation. Geithner also emailed a warning to the Bank of England’s governor, Sir Mervyn King, in the spring of 2008, But Geithner’s email fell far short of suggesting any criminal wrongdoing, and Sir Mervyn stunned British MPs when he testified before a parliamentary select committee that he only learned of possible crimes in recent weeks. Neither man wanted to know, and Geithner seemed far more interested in passing along suggestions from American banks and getting more of them onto the panels setting Libor rates.

Nor have his views changed now that he’s Treasury secretary. In the words of a recent New York Times editorial,”to hear him tell it, the issue was a plumbing problem, not a potentially criminal and certainly improper pattern of rate rigging.” Federal Reserve Chairman Ben Bernanke similarly has his head in the sand, telling U.S. senators that the Fed had no jurisdiction over the rigging. With regulators like that, any hope for serious financial reform will have to come from the outside.