Carla Gugino: TV pits women against each other

"Political Animals" star tells Salon ambitious women should be on the same team, and reclaim "bitch" from haters 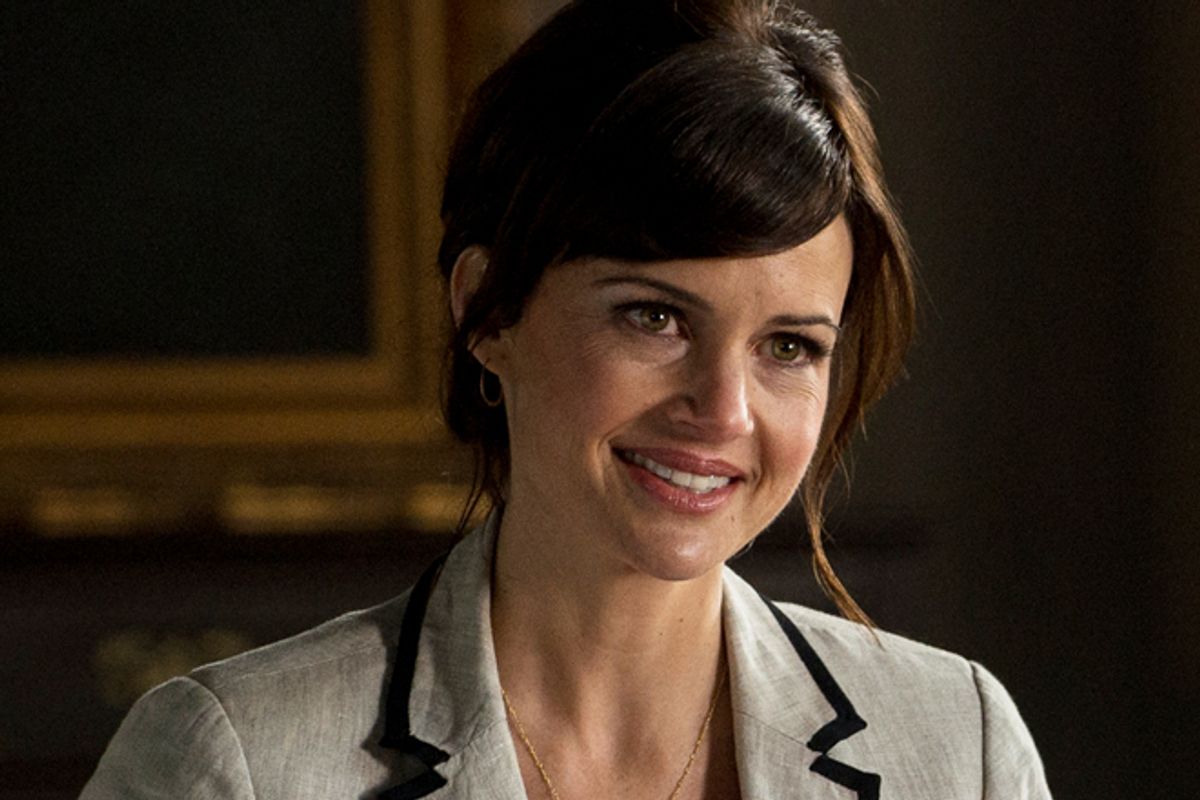 "Political Animals" is basically Hillary Clinton fan fiction: What if Hillary had left Bill after she lost the primary to Barack Obama? What if, while still secretary of state, she had decided to run for president? What if she had two sons instead of a daughter, a feisty mother, was named Elaine Hammond, and looked exactly like Sigourney Weaver? The fun, soapy results are playing out every Sunday night on USA at 10 p.m., with Weaver joined by a supporting cast that includes Carla Gugino as Pulitzer Prize-winning political journalist Susan Berg, a woman who made her career exposing the Hammonds' dirty secrets. Gugino has appeared on TV many, many times before, usually kicking ass in a show that is way too short-lived ("Karen Sisco," "Threshold," to name just a few of Gugino's TV credits). Gugino spoke with Salon last week about Hillary, reclaiming the word "bitch" and the way TV portrays strong women.

Are you a Hillary admirer?

I think Hillary's amazing. I think she's one of the smartest people on the planet and incredibly impressive on all counts. I do think, clearly, obviously, in terms of this piece, there are certain things that are taken from her, for sure, and Madeleine Albright. I thought of Hillary when I read the script the first time. But then as soon as Sigourney opened her mouth it seemed like such a different character to me. I do look forward to a time when there are enough women in that position, or that have become president, that she’s not the only person we think of. I understand that we go, "Oh, look at what woman this is in reference to,” because there are so few it could be. Whereas if it were a man, it would be so much harder of a bull's-eye to hit because there are so many men who have been in that position. And that's part of the reason I think the show is really important. I think the show is entertaining and delicious to watch, but also there is a different way that women look at the world and therefore the way that women look at politics, the way that women look at foreign countries. And it’s unusual, you don't normally see that perspective or those kinds of relationships between strong women on television.

Do you feel like Susan is the kind of woman who likes other women?

It’s an interesting question because when I first sat down with Greg Berlanti, our creator, I said, "I have no interest in playing women against women dynamics," even in the the dynamics with Georgia, the younger reporter. It's boring and I don't believe in it as a person and it's very on the nose and we've seen that a lot of times. And as the show progresses, the dynamic with Susan and Georgia, there gets to be more there. And, I don’t know, the word "sisterhood" has become so precious and coy, and I'm not sure if that's the right terminology, but Susan definitely has nothing to do with being against women. This is one of the things Greg and I talked about at the beginning, which was interesting to me. I'm intrigued by the fact that there are these strong women who are ambitious, who are successful, who are very career-oriented, and who would therefore understand each other more than anybody else -- and who would understand what it took to get where they're at more than anybody else. So why is it so often that these women are on the opposite side to the track, so to speak? And what if they were able to somehow play on the same team? So the short answer to your question is, I do think she likes women and wants them to succeed, and the longer answer is that the jobs she and Elaine have just make it very hard to do that.

The dynamic with Georgia is interesting, because they're not that different. When they were both up-and-comers they were both willing to write about things that other people might have thought was inappropriate. Susan hates Georgia for having no ethics, for running this gossip story about the Hammonds' son, but Susan made her career writing about the Hammonds' personal life.

Exactly, I think that is true and ultimately you start to realize that Susan has a stronger moral compass probably than Georgia does, but that is coming with age and with experience and her struggle with her own sense of what's right and wrong.

There was a line in the first episode: "Never call a bitch a bitch; us bitches hate that." How do you personally feel about the word "bitch"?

One of the themes of the show is the conflict between public and private personas, who all of these people are as public figures and how that jibes with and affects who they are as private ones. Can you talk about that a little?

I do really love that behind-the-curtain and in-front-of-the-curtain thing. Having a sense of who you think someone is and being able to open the curtain and think, "Oh, wow, there's a lot more really going on.” As human beings, we have these ways we want to be perceived as people —  which is human nature; you want to be loved and appreciated and all those things — and yet there's the other inner self that is less sure or less sure-footed and usually much more human. And generally when we fall in love with people, we fall in love with those things as opposed to the perfect picture thing. There's an interesting quote that I read when I was doing some research in regards to this project, just seeing thematically where this piece fits, and I came across this quote that said, "The state of the well-known is to be misunderstood." And I think it's really true, but I think it's true of all humanity. As an actor sometimes that happens to you, but it's also just, what else do we do except misunderstand people who we don't know? Because you just have to guess. You're going to guess right once or twice and then you'll probably make some wrong assumptions. It's the nature of curiosity and of trying to put someone into a box. And putting people in a box has such a bad connotation, but it’s just about people trying to understand people, and we probably misinterpret each other much more than we actually get it right.

It's funny you should bring up that quote, because there's that line in the pilot, where Sigourney Weaver's character says, "Don’t give me that crap about how the people would love me if they just knew me. It’s been 20 years. They know me," which is almost the opposite. Like, they may not know the private her, but they do know the public one.

That's what’s amazing to to me about the show, is that at every turn— and this is really not always the case and it was really evident reading the script—  Greg has chosen to make it more complex as opposed to simplifying it. And I guess that's what I really do love in Susan Berg and her very strong viewpoint on this family. Frankly, she was probably right a lot of the time and was letting the public know like, "Hey, this is what a dual personality is like. This is a man who has been unfaithful repeatedly to this woman in public; how is he going to run the country? How does that represent how he will deal with other things?" At the same time, as soon as she starts to see into the family, of course she sees that everyone's a human being and it's much harder to have these kind of platitudes then.