A new report exposes the extent of the U.S. religious right's meddling in Africa's sexual politics 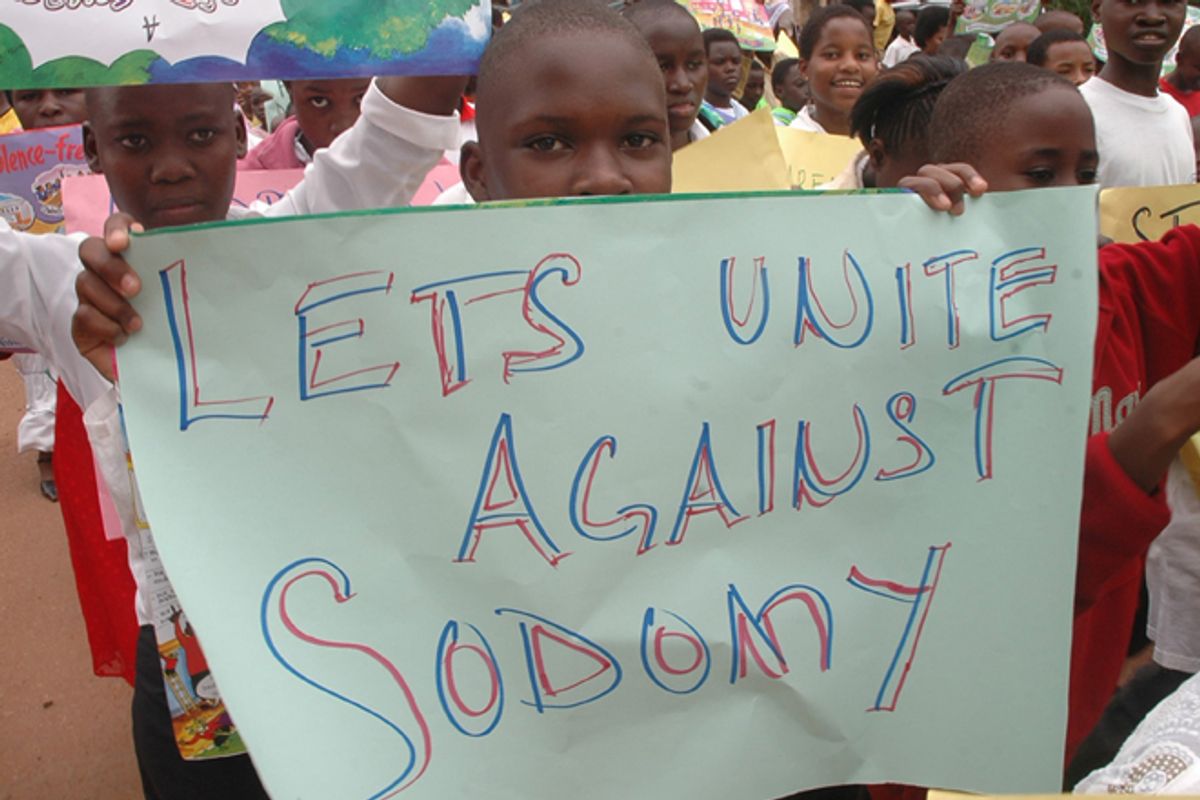 Ugandan children demonstrating against homosexuality in the capital city of Kampala. (AP/Stephen Wandera)
--

Stateside, the warm ties between U.S. evangelicals and conservative African clerics are visible only in glimpses: the footage of Sarah Palin’s Assembly of God church hosting a minister who cast out demons, the notorious Kill the Gays bill in Uganda. But a new report casts light on how, with relatively little funding, American social conservatives are trying to establish their anti-gay, anti-abortion rights and anti-contraception view across the continent – and often succeeding.

I wrote recently about how Kenya’s constitutional reform was overtaken by a debate on abortion, which, despite the best efforts of the same groups, is now leading to slow but sure legal steps to improve access to safer abortion and reduce mortality rates. Political Research Associates’ “Colonizing African Values: How the U.S. Christian Right Is Transforming Sexual Politics in Africa” suggests that these victories can be fragile, and that local branches of U.S. conservative groups have far from given up the fight.

Pat Robertson’s American Center for Law and Justice has an offshoot in Kenya, whose director, Joy Mdivo, told a PRA researcher, “The current constitution promotes gay rights and abortion. We are working on going to court over those two issues. We shall also carry out further civic education to warn people of the dangers of homosexuality and abortion in Kenya.” In the elections slated for early next year, they’re also hoping to help stack the legislature with anti-gay and anti-choice politicians.

The title of the report gets right to the heart of the rhetorical battle, in which both progressives and conservatives from international organizations accuse each other of being neo-colonials imposing their cultural values on beleaguered Africa. For obvious historical reasons, this is a framing that has a lot of power on the ground. The report’s author, Kapya John Kaoma, concedes that public opinion pools in different countries suggest conservative views on gay rights and abortion, but argues, “We can challenge this myth by exposing the Americanness of the recent politicization of homosexuality and abortion in Africa.” One example: Draft anti-gay legislation includes prohibitions on gay adoption, an issue that is nowhere on the local agenda but highly relevant in the U.S. Similarly, Kaoma points out with regards to antiabortion laws, often a legacy of colonial regimes, that “Africans were ending pregnancies using various traditional methods long before colonialism.”

And these accusations of outside influence can often be internally contradictory. Take a video from Father Raphael Wanjohi, who runs Human Life International’s Kenya operations. In one breath he indicts Western leaders for trying to use Kenya to push a liberal agenda throughout East and Central Africa. In the next breath he asks for more outside support: “America, thank you for the support you have given us in the past. I hope you will continue with your support so that we can fight for the unborn and women.”

What does that advocacy look like? HLI is relatively marginal in the U.S., but a $400,000 investment goes a long way with 37 affiliates across Africa. In Uganda, its director has argued, “contraception and abortion are major modern vices confronting mankind. These vices have a multiplier effect in the sense that they lead to other evils, such as euthanasia, stem cell research, human cloning and homosexual life styles.” Ugandan affiliates also reported an abortion provider to the police.

Then there’s HLI’s 2008 ad campaign in Tanzania. According to the report, it “depicted a skeleton as a ‘Faithful Condom User.’ Although the organization wants to present this campaign as a success, [director of research and training worldwide Brian] Clowes admitted to PRA that the billboards did not last long since people took them down.”