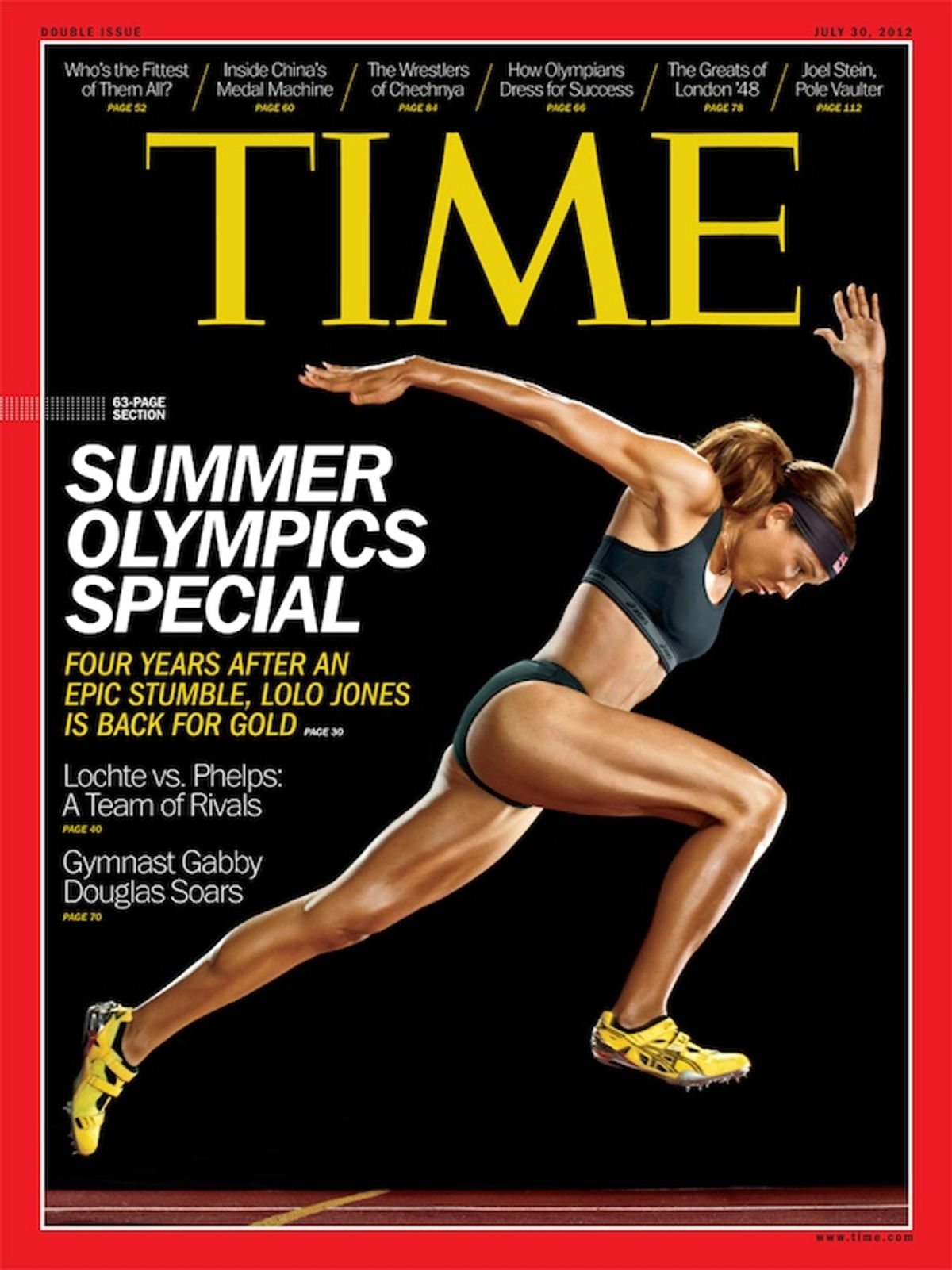 This week, Time magazine rolled out the covers for the U.S. and international editions of its summer Olympic preview. Four out of five of the portraits featured women. That is, perhaps, not a surprise since the Olympic audience skews female. Nonetheless, with only one male athlete in the group, Olympian hurdler Lolo Jones’s powerful stride seems an apt metaphor for the leaps made by women athletes in the 40 years since the passage of Title IX in the U.S.  (The pair of covers above represent Time’s Europe/Middle East/Africa and Asia editions.)

The aesthetics of these photos are notable for another reason as well. They draw the reader’s gaze to the female body without sexualizing it. Instead, women’s athleticism is featured. We are accustomed to seeing the chiseled musculature of male athletes in sports photography. Women, however, aremore commonly sexualized, with shots of female athletes often indistinguishable from the gratuitous pictures of models and movie stars found in fashion layouts and men’s magazines.

When editors are not using sex to sell the Olympics, they often fall back on another familiar depiction: the pixie gymnast. Compare Time’s cover shot of Gabby Douglas’s elite athleticism with the more conventional image of female gymnasts used by Sports Illustrated on the cover of its Olympic preview: The SI cover poses female gymnasts in a passive stance that is cute but athletically unremarkable.Time, conversely, positions Douglas as an active competitor performing an athletic feat that few people could replicate. Rather than emphasizing youthful appeal, the Time photo emphasizes strength. It also shines a spotlight on an individual star—something that is more common with male Olympic athletes. Discussing the choice to feature the entire team on their Olympic preview cover,SI’s Olympics editor Craig Neff told USA Today:

“It just felt more Olympic to have the spirit of this whole team that’s working together. We could get Gabby on, get Jordyn [Wieber] on, get their teammates on.”

Featuring the whole team is laudable, but one wonders if SI’s decision was driven by true Olympic spirit or by the cultural tendency to view women athletes as more cooperative and team-oriented than male athletes. Might there have been hesitancy on the part of SI editors to crowd more than one prominent male athlete onto the cover? According to USA Today, teammates and rival swimmers Michael Phelps and Ryan Lochte were considered, as was USA basketball’s “new Dream Team.” Perhaps featuring 5 female gymnasts was simpler than orchestrating a photo that would adequately accommodate multiple male superstars.

In both cases, however, it’s notable that women were selected to exemplify the team. The fact thatTime’s photos look more innovative than SI’s is indicative of how rarely we see female athletes in posed shots looking powerfully athletic.