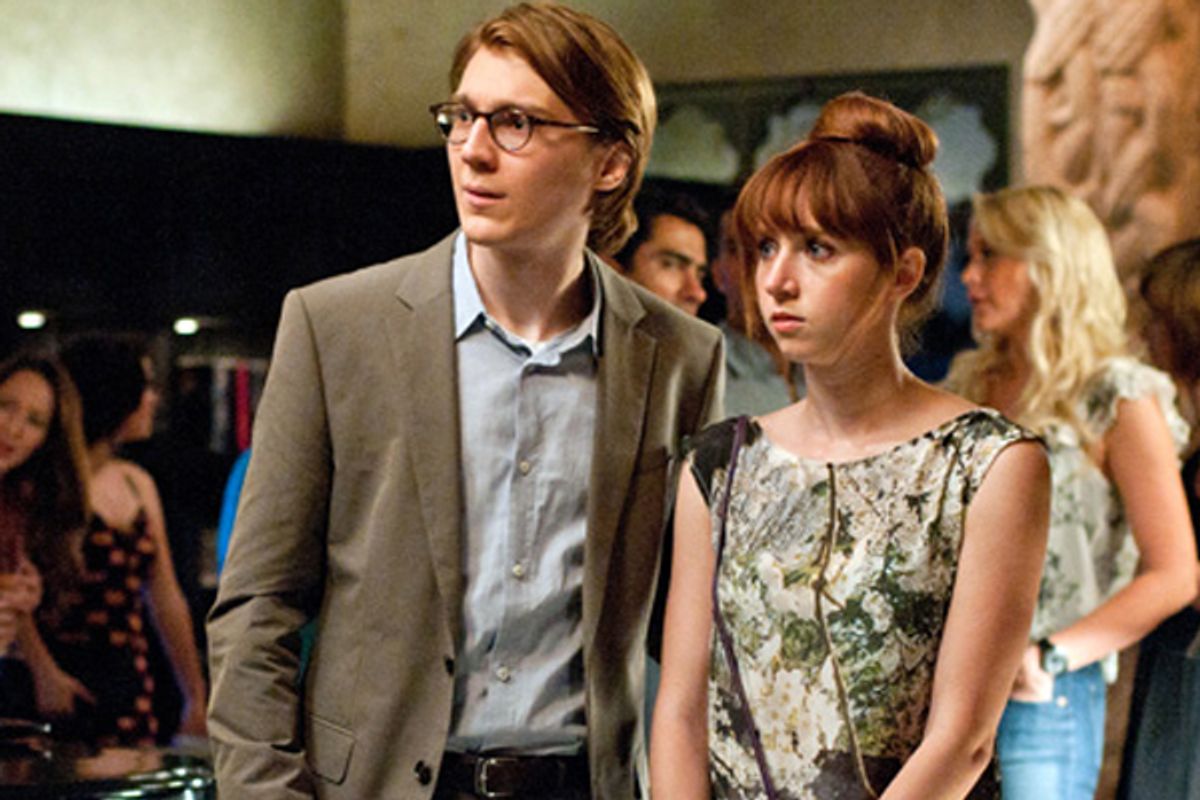 Why would anyone want to watch a movie about a writer? In terms of what they actually do when they're working, writers must be the most boring people on earth. But there are a lot more movies about writers than there are movies about UPS drivers or accountants, which can partly be explained by the fact that writing remains a mysterious process -- it requires no training or expertise, and literally anyone can do it -- and that the results, at least on rare occasions, can feel like magic. Also, a bit more cynically, there is the fact that somebody has to write a movie, and that person tends to be a writer.

"Ruby Sparks," a widely publicized new indie film about a novelist imbued with magical powers who writes his dream girl into real existence, was itself written by Zoe Kazan, the young actress who also stars as the titular Ruby. Previously the author of a play she began writing as a Yale undergraduate, Kazan clearly takes her craft seriously -- too much so, by the look of things. Like the young writer played by Paul Dano (Kazan's off-screen boyfriend), "Ruby Sparks" is crammed with ideas and top-heavy with ambition. But Dano's character, Calvin Weir-Fields, is both a writer's-block cliché and a total drip, and Kazan's honorable intentions are not nearly enough to overcome the painful struggle of actually sitting and watching her movie. I don't mean the movie is so monumentally dreadful. It's not; it's mediocre and half-baked, with flashes of a potential good movie showing through here and there (which is, if anything, harder to take). What I mean is that while I was watching "Ruby Sparks" I manfully struggled with myself in an effort to like it. I almost got there a few times, but couldn't quite get over the hump.

Dano and Kazan are essentially likable actors who've both given strong performances elsewhere (including playing a husband and wife lost on the Oregon Trail in Kelly Reichardt's shaggy-dog western "Meek's Cutoff"). But their characters here are in one case monumentally irritating and in the other case nonexistent. Exhibiting a syndrome that seems to afflict numerous New York-based indies these days, Kazan's script feels like a half-finished knockoff of a 1980s Woody Allen movie that wanted several more drafts. (Consider: The horny, nebbishy, profoundly insecure writer who conjures a beautiful, ethereal shiksa into existence instead of finishing his book. I'm surprised Allen didn't make that film.) Then there are directors Jonathan Dayton and Valerie Faris, the "Little Miss Sunshine" duo, who appear completely wrong for the material. They can't make it work as zany comedy because it's much closer to being icky than funny, but they also don't seem capable of pushing into darker, "Husbands and Wives" territory where this idea might have thrived.

Let's back up and examine the context of "Ruby Sparks" for a second, because I don't want to participate in the media ritual of bashing ambitious and well-connected young women simply for being who they are and doing their work. (Hello there, Lena Dunham! Who, let's just say, has handled the onslaught admirably.) Zoe Kazan is the 28-year-old granddaughter of legendary film and theater director Elia Kazan -- whose name will always provoke controversy in Hollywood history -- and the daughter of screenwriter Nicholas Kazan, whose credits include Paul Schrader's "Patty Hearst" and Barbet Schroeder's "Reversal of Fortune." She's already had a varied career as a New York theater actress on and off Broadway, and has appeared both in small parts in Hollywood movies ("It's Complicated" and "Revolutionary Road") and bigger roles in indie films like "The Exploding Girl" and "Happythankyoumoreplease." She and Dano are identified with a group of younger writers, performers and artists who have transformed Brooklyn into the center of New York's cultural life. Her play "Absalom" premiered at the Humana Festival in Louisville, Ky., in 2009, and now she's written her first movie screenplay.

Everything about that is A-OK, up to and including the fact that possessing an illustrious and/or notorious Hollywood surname and the connections that go with it may have helped Kazan get a leg up in show business. (Didn't your dad ever explain to you how the world works?) Her success doesn't detract from yours or mine one iota, unless you happen to be a gamine, late-20s actress who's been up against Kazan for a role, and arguably not that much then either. No, the problem is not with Kazan herself but with the current celebrity economy of the post-Lena Dunham era, which has apparently decided that this is Kazan's moment, ready or not. Because she's not ready, and someone, somewhere along the way, should have had the sense to rip up this tepid male-fantasy rom-com -- set in an isolated world of privilege that seems almost tragically detached from anything like contemporary social reality -- and start over, instead of pushing it forward as the next big thing at a moment when mid-level indie films are hardly ever the next big thing and people like me are all too ready to jump on it.

As to the movie, total meh. Good cast, but once I explain the premise, you hardly need to see it. We gather over time that Dano's Calvin Weir-Fields (it's already difficult to like a character with that name, right?) is a J.D. Salinger-type phenom who wrote some generation-defining novel when he was 19 and has been struggling with the follow-up for almost a decade. He's got a brother (the reliable Chris Messina) who's kind of a sleazeball, a fellow famous-writer friend (the reliably unctuous Steve Coogan) who's really a sleazeball and a mensch therapist (an enjoyable cameo for Elliott Gould) who isn't a sleazeball. Calvin lives alone with a mangy little Scottie in a large and empty Los Angeles house and stares at blank pieces of paper in his Olympia typewriter. He's both affected and pathetic, but there's supposed to be something about him we like. I am honestly not sure what.

After his therapist gives him a writing assignment -- to describe someone who likes his dog, despite its unappealing nature -- Calvin both begins to write like crazy and dream like crazy, in both cases imagining a redhead free spirit who's missing a shoe and draws a picture of his dog (although she maybe likes Calvin more than the pooch). First Ruby's stuff begins to appear in Calvin's house: a lacy red bra and panties, a woman's razor, deodorant in one of those pink-and-blue containers. And then one day there she is in the flesh, making him eggs, offering to walk Scottie and acting kind of weird and clingy. Any defects in her personality turn out to be easy to correct, or overcorrect: If he writes that she speaks only French, then voilà! If she picks a fight and wants to sleep at her place, he just writes a sentence about how miserable she is without him, and she's back.

Obviously Kazan's target here is male vanity and neurosis, and more specifically the "Pygmalion" paradox of molding a lover precisely to your specifications, only to discover that you don't know what those are ahead of time. It's an intriguing premise, and some of that material has an edgy, awful resonance that suggests directions the movie might have gone. Calvin's brother urges him to get highly specific, for example, but apparently Calvin's satisfied with her breast size and her appetite for oral sex. Kazan faces the impossible task of playing a character whose attributes are changing all the time and works a few laughs from it. Here and there, Dano hints at the darkness and insanity that could lie beneath the surface of his nerdy Dr. Frankenstein, but ultimately directors Dayton and Faris are shooting for a lighter, more romantic tone that doesn't quite fit.

I suppose that filmmakers who create a magical universe are not obligated to explain it in detail. But it should have some rules, and I became increasingly bothered by the incoherent nature of this one, which gets more and more disheveled as it goes along. Ruby exists in the real world, visible to Calvin's brother and hippie mom (Annette Bening) and artist stepdad (Antonio Banderas) and everybody else, even though some of those people know she isn't "real." Does that mean she now has parents and high-school classmates back in Ohio, and that Calvin has rewritten the entire history of the universe so that it includes her? (If so, the end of the movie doesn't make sense, but it probably doesn't anyway.) Why aren't everyone's memories being rewritten, as in Ursula LeGuin's "The Lathe of Heaven"? Do Calvin's powers extend into other areas of creation, or is he a one-chick wonder? Can he control the World Series and the presidential election? Is Calvin in fact the one true God? If so, wow, that's depressing, but I have various things to suggest to him. One of the lesser ones, way down the list, is to set aside "Ruby Sparks" as an interesting experiment that simply didn't work, and give Zoe Kazan another start on her screenwriting career.