The value of Tom Friedman 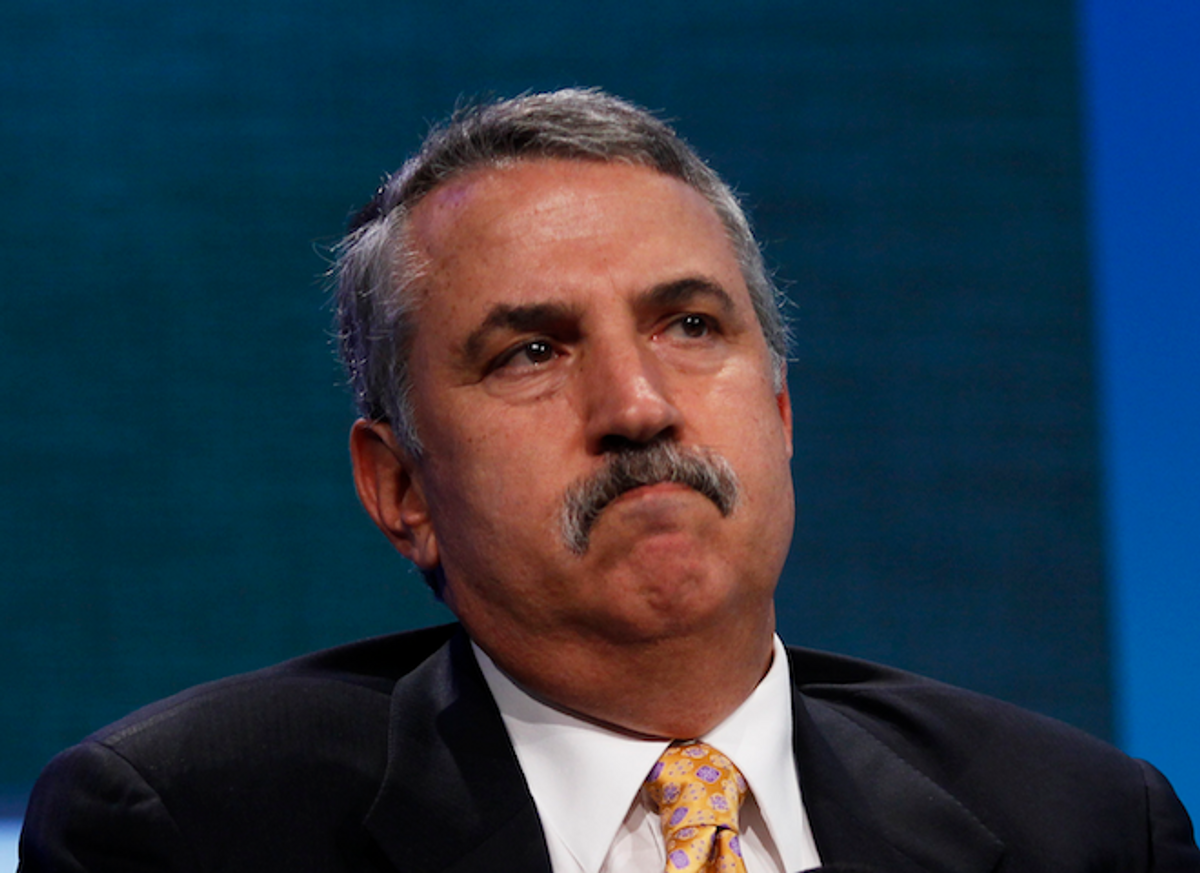 In The New York Times today, Tom Friedman argues that the only thing that could save Syria is if that country is lucky enough to have the U.S. do to it what the U.S. did to Iraq, and in the process, says this:

And, for me, the lesson of Iraq is quite simple: You can't go from Saddam to Switzerland without getting stuck in Hobbes — a war of all against all — unless you have a well-armed external midwife, whom everyone on the ground both fears and trusts to manage the transition. In Iraq, that was America.

Just on the level of basic cogency, this makes absolutely no sense. Friedman says that a country will be "stuck in Hobbes -- a war of all against all -- unless" it has America there. But Iraq did have America there, and -- as Friedman himself points out just a few paragraphs later -- it got "stuck in Hobbes," precisely because America was there ("Because of both U.S. incompetence and the nature of Iraq, this U.S. intervention triggered a civil war in which all the parties in Iraq — Sunnis, Shiites and Kurds — tested the new balance of power, inflicting enormous casualties on each other and leading, tragically, to ethnic cleansing that rearranged the country into more homogeneous blocks of Sunnis, Shiites and Kurds"). He literally negates his own principal claim --  a country that overthrows its dictator can only avoid Hobbes if it has a U.S.-like force occupying and controlling it -- in the very same column in which he advances it.

But incoherence is the least notable aspect of this column. Did you know that "everyone on the ground" in Iraq "trusted" America to manage the transition from Saddam to Switzerland? This would probably came as a great surprise to the actual Iraqis on the ground, as reflected by U.S. government and independent polls in 2006, as reported by The Washington Post:

A strong majority of Iraqis want U.S.-led military forces to immediately withdraw from the country, saying their swift departure would make Iraq more secure and decrease sectarian violence, according to new polls by the State Department and independent researchers.

In Baghdad, for example, nearly three-quarters of residents polled said they would feel safer if U.S. and other foreign forces left Iraq, with 65 percent of those asked favoring an immediate pullout, according to State Department polling results obtained by The Washington Post.

Another new poll, scheduled to be released on Wednesday by the Program on International Policy Attitudes at the University of Maryland, found that 71 percent of Iraqis questioned want the Iraqi government to ask foreign forces to depart within a year. By large margins, though, Iraqis believed that the U.S. government would refuse the request, with 77 percent of those polled saying the United States intends [to] keep permanent military bases in the country. . . .

"Majorities in all regions except Kurdish areas state that the Multi-National Force-Iraq (MNF-I) should withdraw immediately, adding that the MNF-I's departure would make them feel safer and decrease violence," concludes the 20-page State Department report, titled "Iraq Civil War Fears Remain High in Sunni and Mixed Areas." The report was based on 1,870 face-to-face interviews conducted from late June to early July.

But Thomas Friedman wants you to know that Iraqis were so very fortunate to have an occupying military force -- America -- that "everyone on the ground" in Iraq "trusted" to "manage the transition." And Syrians should hope and pray they are so lucky.

This is to say nothing of the warped imagery Friedman often uses of the invading U.S. as a "midwife" -- as though Muslim countries are our little babies who need and pray for our parental imperial guidance out of their primitive wombs. The reality is that almost everything Tom Friedman says on Iraq is designed to make people forget his actual, candidly expressed views about why he thought the war was just -- probably the most viscerally repellent comments anyone with a large mainstream platform has spouted in the last decade.

I say this with all sincerity. If I had to pick just a single fact that most powerfully reflects the nature of America's political and media class in order to explain the cause of the nation's imperial decline, it would be that, in those classes, Tom Friedman is the country's most influential and most decorated "foreign policy expert."

In 2000, the recently deceased Alexander Cockburn wrote an astoundingly good essay on Friedman which documents pre-9/11 conduct from Friedman that has largely been forgotten but which presaged almost every odious sentence and act he unleashed on the world over the last decade.

UPDATE: Friedman recently visited Australia and New Zealand to promote his latest book and, needless to say, generously gifted the citizens of those nations with his wisdom and insights about their countries. One New Zealand journalist reacted, not very gratefully, here. Friedman was interviewed for almost an hour by one of that country's best known radio talk show hosts, Kim Hill, and her relentlessly adversarial, critical, deeply informed and at times subtly contemptuous questioning -- which can be heard on the player below or downloaded here -- stands in stark contrast to how he is routinely treated by the worshipful American media:

UPDATE II: Here's "The sociopathy of Thomas L. Friedman: A compendium"; it's far from comprehensive, though it is quite illustrative.

UPDATE III: Friedman expert Matt Taibbi -- this remains the all-time Supreme Gold Standard for eviscerating not only Tom Friedman, but anyone -- pronounces today's column "the single most incoherent thing he has ever written."

Meanwhile, ProPublica's Justin Elliott documents how obsessed Friedman is with demanding a Muslim Mandela (today: "Without an external midwife or a Syrian Mandela, the fires of conflict could burn for a long time") but never, of course, an Israeli Mandela or, more accurately, an Israeli de Klerk.